Elderly Pensioner Arrested by Kremlin-backed militants for a Ukrainian flag 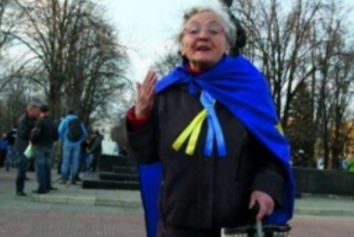 73-year-old Anna Ivanivna Hrusha was first attacked, then manhandled by Kremlin-backed militants on Ukrainian Flag Day and taken to a local police station. There they threatened to take her home away from her or lock her up in a psychiatric clinic.  The appalling treatment was because she had come out on a day special to most Ukrainians with a Ukrainian flag and wearing beads in the same blue and yellow colours.

Those political analysts calling on Ukraine to ‘give up Donbas as lost’ would do well to think about the very many people who for any reason but support for the militants have remained on territory now called the ‘Donetsk and Luhansk people’s republics’ [DNR, LNR].  Certainly for a lot of elderly people, it was simply impossible to make such a huge upheaval.

Anna Ivanivna remained in Luhansk, where she was well-known for taking part in all pro-Ukrainian events and gatherings, always with a small Ukrainian flag.  This did not stop after Kremlin-backed militants seized control.  On each national holiday she would come, holding her flag, to the monument to the great Ukrainian poet Taras Shevchenko. 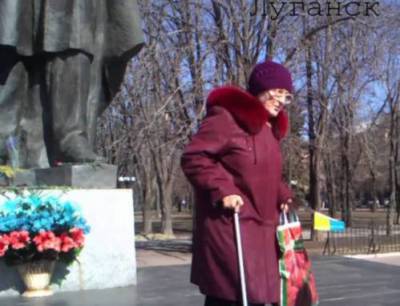 Her courage became more widely known this year after a video was posted on the Internet of young provocateurs arguing with the elderly lady on March 9, the anniversary of Shevchenko’s birth.

This time the militants went further.  She explains that on Independence Day, she went with her beads, flag and flowers to the monument to Shevchenko.  She had laid the flowers and began singing the Ukrainian national anthem when she was accosted by two women.  Both abused her, and one used her bag to hit out at the elderly lady, ripping the beads.

The two so-called Luhansk police officers who appeared at this point ignored the women, and grabbed Anna Ivanivna, pulling her by force to their car.  She tried to resist, but was forced, which has left big bruises on her arms.

She says that they shouted that she was “old but strong”.  She in turn cried: “They’re killing a Ukrainian!”.  All of this happened early on August 23, and she was held in the police station until 20.45.  They gave her nothing to eat or drink, and though no physical force was applied, they did constantly insult her and threated to give her flat to the militants and even put her in a psychiatric hospital.

She was understandably weakened physically by her treatment and spent most of Independence Day in bed, only getting to Church in the evening to pray for Ukraine.

She is unbroken and promises to keep going to all meetings. “It is Ukrainian blood that flows through my veins, and I am in my country”.  Her heart bleeds over all of this, she added, and asked the journalists to pass on her greetings to all those who love and are true to Ukraine.

There were others in militant-controlled Donbas who also marked Independence Day in a public manner.  At around 6 a.m.  the Ukrainian national anthem began playing very loudly, and there were also Independence Day messages written on the ground.

If that does not sound like much, think again.  Those who took such steps risked, at a minimum, being seized by the militants and held hostage.

On Ukrainian Flag Day in Kyiv, the Flag was raised by President Petro Poroshenko and by the daughter of Volodymyr Rybak who was abducted and savagely tortured to death in April 2014.  He had been seized while trying to restore the Ukrainian flag that the militants had pulled down.