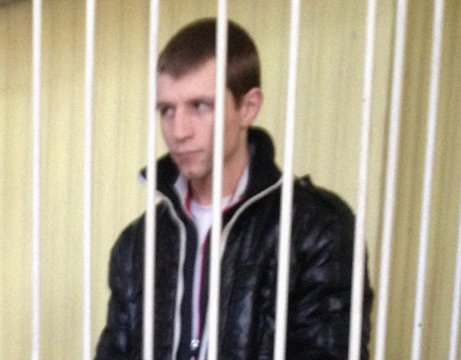 The court in Russian-occupied Crimea which handed down a surreal 10-year sentence against Andriy Kolomiyets over an alleged event during Euromaidan is blocking an appeal against the sentence.  The 23-year-old Ukrainian is being held in appalling conditions, with his family unable to visit him.

Kolomiyets’ lawyer Mikhail Kushpel explained at a recent press conference that Russia is obstructing the appeal, and said that he has made repeated attempts to move the situation on, but with no effect.  He had to approach the High Court in Crimea three times and Russia’s Supreme Court twice just to get a copy of the actual sentence.  The official appeal was sent on June 17, shortly after the sentence was passed, however it was returned, without the envelope even having been opened, on some formality. The very indictment has proven difficult to obtain, though it appears that Kolomiyets himself has finally been given a copy.

All of this is dragging out the appeal, with Kolomiyets in the meantime held in the same overcrowded Simferopol SIZO [remand centre] as the large number of other Crimean political prisoners.  His parents live in the Kyiv oblast and are unable to visit their son.  His common law wife Galina Zalikhanova is facing enormous hurdles against organizing the legal marriage without which they will not allow her to visit Andriy.

Kolomiyets is one of two Ukrainians so-far sentenced by courts in Russian occupied Crimea to terms of imprisonment on astoundingly lawless charges.  He and, earlier, Oleksandr Kostenko  were accused of events that could not be proven but that categorically do not fall under Russian jurisdiction, pertaining as they do to Euromaidan in Kyiv which took place before Russia invaded and annexed Crimea.

Like the other equally lawless prosecution of Crimean Tatar leader Akhtem Chiygoz, Ali Asanov and Mustafa Degermendzhy and others, the courts under Russian occupation are openly using criminal prosecutions as revenge, without any regard for fundamental principles of law.

Kolomiyets was charged with what was qualified as the attempted murder of two Ukrainian Berkut riot police officers during Euromaidan in Kyiv and with transporting hashish.   The first charges pertained to the allegation that Kolomiyets had thrown Molotov cocktails at the two men and came under Article 30 § 3 and 105 § 2 of the Russian Criminal Code, namely “attempted murder of 2 or more people in connection with their official activities … out of motives of political and ideological hatred”.  He was charged also under Article 228 § 2 with transporting “a large amount” of narcotics.

The only thing that was true in any of this was that Kolomiyets was on Maidan.  In fact, human rights activists have suggested that a photo of the person on Maidan may well have been enough to prompt the trial.

Neither of the two alleged ‘victims’ had ever reported any injuries at the time, and even in court could only speak of having “felt pain”.

Kolomiyets has given a harrowing, and unfortunately familiar, account of the torture he was subjected to in order to extract a ‘confession’.

The renowned Russian Memorial Human Rights Centre almost immediately declared Kolomiyets a political prisoner.  It slammed the main indictment as grotesque since a court under Russian law has no jurisdiction over events between Ukrainian nationals in Ukraine.  It stressed that the fact that the two officers later took Russian citizenship is immaterial.

Since the charges linked with Maidan were by definition lawless, Memorial only examined the second part of the indictment.  They believe it likely that the drugs were planted.  This was very similar to the prosecution of Kostenko, where a second charge was ‘thrown in’, also based on highly dubious items supposedly ‘found’ during a search carried out with multiple irregularities.

Kolomiyets’ case added a new chilling element to the lawlessness, since there is nothing at all to link the young Ukrainian with Crimea.  He was arrested in the Northern Caucuses on May 15, 2015, where he was living with his partner and her four children.

He was sentenced to 10 years’ maximum security prison on June 10 on charges whose cynicism defy belief. Although there is no reason to believe that a higher court would fairly assess this case, it is telling that even his right of appeal is being flouted.