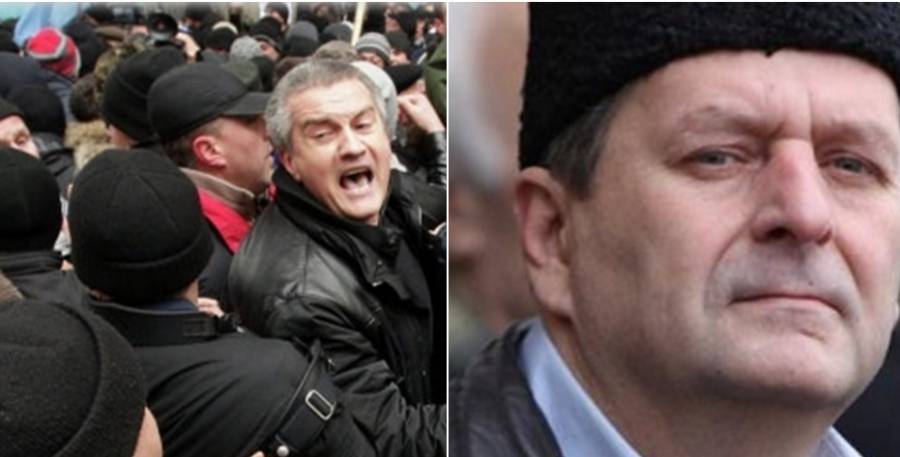 De facto Crimean leader Sergei Aksyonov’s testimony on Jan 31 against Crimean Tatar leader Akhtem Chiygoz clashed with hard evidence, but it did reveal some interesting details. During cross examination, the pro-Russian politician with a shady background installed at gunpoint by Russian soldiers on Feb 27, 2014, admitted his role in organizing the Crimean ‘people’s insurgency’. Lawyer Nikolai Poloov extracted acknowledgement that four days earlier, this unregistered paramilitary outfit had purchased several hundred bullet-proof vests, shields, etc. and that many had weapons. This certainly suggests that they were preparing for armed confrontation.

The irony is acute. Aksyonov’s appearance in court came almost exactly two years after Chiygoz was arrested on the surreal charge of having organized a mass riot on Feb 26, 2014. Both Chiygoz and Aksyonov, together with the latter’s combat-ready paramilitaries, were present at the demonstration outside the Crimean parliament that day. This took place on Ukrainian territory, and even had the events constituted a mass riot, which they did not, Russia’s own legislation prohibits prosecution under Russian legislation for something that happened in another country. Under Russian President Vladimir Putin, the law is for suckers, especially where revenge is concerned, and the cynical prosecution of Chiygoz provides important clues as to why Russia, with Aksyonov’s help, has so targeted the Crimean Tatars since invading and annexing Crimea.

There are strong grounds for believing that the Kremlin was hoping to pull off an effective seizure of power on February 26, 2014, without demonstrating obvious Russian intervention. Intercepted phone conversations (the ‘Glazyev tapes’) between a senior Kremlin adviser Sergei Glazyev and other figures suggest that Russia was orchestrating events in Crimea and using the same methods in Donbas, Kharkiv and Odesa.

One of the key themes in the tapes is the need to make it look as though the calls for Russia’s ‘help’ are coming from locals. In the case of Crimea, certain pro-Russian politicians were supposed to hold an extraordinary session of the Crimean parliament on Feb 26, and push through a change in Crimea’s status – away from Ukraine, and essentially under Russia. The plan on Feb 26 went wrong, mainly because of the Crimean Tatar Mejlis [representative assembly] who called on Crimean Tatars and other concerned Ukrainians to come to the square outside the parliamentary buildings to defend Ukraine’s territorial integrity. At least 10 thousand people, mainly Crimean Tatar, heeded the call. There was also a smaller, but substantial, crowd of pro-Russian demonstrators, led by Aksyonov and his ‘people’s insurgency’. Despite the huge number of people, the demonstration was reasonably peaceful, and the Mejlis leaders present, including Chiygoz, actively sought to restrain hotheads. This is confirmed by independent witnesses, and by the video footage available. The demonstration did, however, achieve the Mejlis’ aim of preventing the extraordinary session of parliament.

Russian soldiers without insignia seized control of the parliament, airport, etc. early the next morning. A ‘parliamentary session’ was held at gunpoint, with the required degree of coercion by Russian soldiers with machine guns acknowledged even by Russian former military intelligence officer Igor Girkin. Within a couple of hours Aksyonov, whose marginal pro-Russian party had only 4 MPs in the Crimean parliament. had declared himself leader. He went on to announce the blitzkrieg ‘referendum’ which was, with good cause, not recognized by any democratic country. Russia claimed Crimea to have ‘voted’ to become part of the Russian Federation, and Aksyonov remains in power.

The reprisals against the Mejlis and its members began within months. Since Russia had banned the leader of the Mejlis, Refat Chubarov from his homeland, Akhtem Chiygoz, as Deputy Head, became the target. Chiygoz was arrested on Jan 29, 2015 and charged with “organizing a mass riot” on Feb 26, 2014. He has been imprisoned ever since, as have two other Crimean Tatars – Ali Asanov and Mustafa Degermendzhy – arrested in April and May 2015.

Amnesty International, who have declared Chiygoz a prisoner of conscience, point out that Russia is in breach of international law by prosecuting people in accordance with Russian legislation on occupied territory.

It is also in breach of its own legislation and fundamental principles of law since it is trying the men under Russian legislation for a demonstration which unquestionably took place on Ukrainian territory and under Ukrainian law.

The ‘case’ has targeted only Crimean Tatars, with pro-Russian demonstrators treated as ‘victims’. It is worth noting that the husband of Valentina Korneva, one of two people who died that day, has said that he believes his wife was killed by paid thugs brought to the demonstration in two coaches by the pro-Russian side. The other person died, seemingly of a heart attack, because of the crush in the pro-Russian part of the demonstration.

Polozov notes that Aksyonov’s testimony in court, like that of many of his ‘people’s insurgents’, does not gel with material evidence, primarily the video footage of the demonstration. As with that given by other so-called witnesses, his testimony seems vague and often not directly linked with the defendants at all. He does say that he saw Chiygoz speaking through a loudspeaker but couldn’t tell if he was stirring up or calming the crowd since the Mejlis leader was speaking in Crimean Tatar. Chiygoz can be seen on many videos clearly trying to restrain hotheads.

During the 57th court hearing, Polozov was able to demonstrate that the first provocation during the demonstration had come from the pro-Russian demonstrators led by Aksyonov.

The very charges against Chiygoz and the others are sloppy and vague, with it quite unclear what specific acts they are alleged to have committed.

In late February Novaya Gazeta reported that the FSB, short of evidence, had invited Simferopol residents to come forward “even in the absence of bodily injuries”. This has resulted in surreal court hearings where the supposed victims give ‘testimony’ which often exposes the racism of the whole exercise, while providing no sensible indictment.

In declaring Chiygoz, Asanov and Degermendzhy political prisoners, the Memorial Human Rights Centre pointed both to the impossible lawlessness of the charges, as well as gross flaws in the proceedings. It believes that most of the supposed ‘victims’’ injuries are fictitious. Judging by what Asanov and Degermendzhy and their families recount, they were told clearly that they would be freed if they testified against Chiygoz. They refused, and remain in indefinite imprisonment.

In July 2016, the court quite unwarrantedly separated the trials of Chiygoz and of the other men, and also prohibited them from being present at the trial. This is a grave violation of their right to a fair trial. Chiygoz can only communicate with the court at his own trial by skype from his prison cell. Amnesty International reports that at the hearing they attended on Sept. 27, 2016, Chiygoz “could not hear everything that was said in court, and the trial had to be interrupted several times because of the bad quality of the internet connection. … Because of the video link, at no point during the hearing was Akhtem Chiygoz able to consult his lawyer in private.” In this case, as in the trial of 4 Crimean Tatars accused of involvement in an organization which is legal in Ukraine, ‘secret witnesses’ are being used, with there being no way of challenging fabricated testimony. Any formal elements of a prosecution and trial in this case are cynical pretence, and Russia is simply imprisoning Crimean Tatars for their opposition to its invasion and occupation of their homeland.