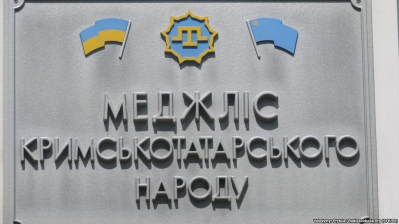 Russia has formally begun the procedure of banning the Mejlis of the Crimean Tatar People citing as formal grounds the law on countering ‘extremism’, while claiming, in Soviet style, that this is because of requests from Crimean Tatar organizations.

The Mejlis represents the vast majority of Crimean Tatars and has been adamantly opposed to Russia’s occupation of Crimea since the invasion in Feb 2014.  While the Mejlis has remained firmly committed to peaceful protest, Russia and the regime it installed in Crimea have waged a major offensive against it, involving the exile or imprisonment of its leaders and other forms of repression.  There have been persistent attempts to deny and to undermine its authority.

The denials are in marked contrast both to the recognition given the Mejlis both in Ukraine and internationally.  Ukraine’s parliament recognized the Mejlis as the main representative body of the Crimean Tatar people on March 20, 2014.  This was reiterated by the European Parliament in its Feb 4, 2016 Resolution.  This document specifically condemns the actions of the de facto authorities in Crimea by hindering the functioning of the Mejlis, closing its headquarters and through other acts of intimidation (item 11).

The Mejlis is an integral part of Crimean Tatar life and self-government, and an official ban will not prevent this.  As Euromaidan SOS points out, it will however make it impossible to use the Mejlis symbol which is basically the Crimean Tatar flag. The ban will also carry with it criminal liability for supporting and / or financing the Mejlis, a ban on circulating its materials and likely prosecution of members and supporters.

Nariman Dzhelyal, the First Deputy Head of the Mejlis, was handed a copy of the application for a ban to the Crimean Supreme Court on Monday afternoon.  The document read out by de facto prosecutor Natalya Poklonskaya is an echo from the worst Soviet traditions.  It states, for example, that “there continue to be appeals from the Crimean Tatar population, including from the heads of Crimean Tatar organizations, asking for the activities of the Crimean Tatar Mejlis to be declared unlawful and provocation, and to also take measures to ban the use of the Crimean Tatar national flag by criminals running the blockade and sabotage against the peoples of Crimea”.

One such document was presented to Dzhelyal when he was summoned for questioning on Feb 11, the first day of a mass wave of armed searches and arrests of Crimean Tatar homes.

These alleged ‘voices of the people’ are especially unconvincing given the long background to Russia’s offensive against the Mejlis.  This became extremely fierce as the Blockade began to bite and to show up the degree to which Crimea is dependent on mainland Ukraine.  It had, however, begun within months of Russia’s annexation of Crimea, and escalated seriously after the Mejlis called on Crimean Tatars to boycott pseudo elections in September 2014.  It was just days after these elections that an 11-hour armed search was carried out of the Mejlis building in Simferopol.  Nothing even remotely illegal was found and the next day, a different pretext was used to evict the Mejlis.

The notorious 26 February 2014 case, the detentions, as well as armed searches and interrogations, are widely understood to be an attack against Crimean Tatars in general, but against Chiygoz and the Mejlis in particular.

Back in October 2015, Russia’s Civic Chamber publicly asked the Prosecutor General to investigate the Mejlis for possible ‘extremism’.  The letter to Russia’s Prosecutor General Yury Chaika was signed by Maxim Grigoryev, chair of the ‘Commission on harmonization of inter-ethnic and inter-faith relations’.  He also claimed that “during meetings with residents of Crimea, we were on several occasions passed complaints about the Mejlis’ extremist activities.”

This followed a similar, but more vague, threat  made a month earlier  and ‘advice’ issued by Poklonskaya to the Crimean media not to mention the Mejlis at all.

Grigoryev’s account of the Blockade, and allegations about Crimean Tatar leaders, are highly questionable, as indeed are the arguments presented in the ban application.

Poklonskaya is reported by TASS to have, in all seriousness, told Nariman Dzhelyal on Monday that she was handing a copy of the ban application to him because “the Head of the Mejlis Refat Chubarov is hiding from the investigative bodies and is at present on the wanted list for crimes which he has been charged with”.

Refat Chubarov was banned from his homeland in early July 2014, 2 months after a similar ban was imposed on veteran Crimean Tatar leader Mustafa Dzhemiliev.  However, in October 2015, a month after the two men initiated the Crimea Blockade, Russia issued an arrest warrant against Chubarov.  He is accused (this is not a joke) of  “encroaching on Russia’s territorial integrity” by insisting that Crimea is Ukraine.

Two months later, an arrest warrant was issued against 72-year-old Mustafa Dzhemiliev.  He is accused of having, on May 3, 2014, the day after the ban against him was first imposed, tried to cross into his own homeland which Russia, in violation of Ukrainian and international law had invaded and annexed a few months earlier.

Poklonskaya also preferred not to explain that she could not hand the document to the Deputy Head of the Mejlis, Akhtem Chiygoz, who has been held in detention since Jan 29, 2015, on trumped-up charges pertaining to a pre-annexation demonstration over which Russia has no jurisdiction.

The document claims that the ban is called for on the basis of Article 9 of Russia’s law on countering what it calls extremism.  The specific article concerns liability of organizations for carrying out extremist activities.

The application begins by citing article 13 of Russia’s Constitution, which states that “The creation and activities of public associations whose aims and actions are aimed at a violent change of the fundamental principles of the constitutional system and at violating the integrity of the Russian Federation, at undermining its security, at setting up armed units, and at instigating social, racial, national and religious strife shall be prohibited.”

It is then noted that “one of the main aims of the Mejlis is the reinstatement of the national and political rights of the Crimean Tatar People and implementation of their right to free national-state self-determination on their national territory.”  It seeks to achieve this, and here’s the rub, as part of Ukraine.

This is where the Mejlis’ purported ‘extremism’ lies.