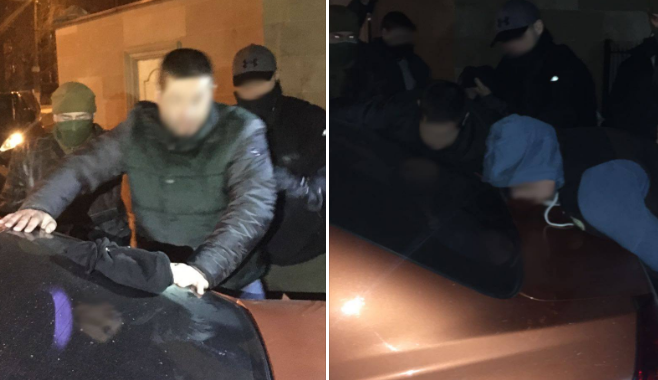 The National Anti-Corruption Bureau [NABU] has reacted with anger after a court rejected its application to have a Kyiv judge caught taking a huge bribe remanded in custody.  The agency pulls no punches, calling the move sabotage and rejecting the court’s attempt to hide behind a dubious ‘statement’ issued recently by the High Council of Justice.

The judge has been identified only as from the Solomyansky District Court in Kyiv.  Interior Minister Arsen Avakov reported on Jan 26 that the judge had been detained together with the director of a law firm who is believed to have acted as the go-between for a bribe of 22 thousand USD.

NABU investigators filed an application with the Halytsky District Court in Lviv for the judge to be remanded in custody.  This was rejected on Jan 29, with the person accused asked only for a signed undertaking not to leave, which NABU considers unacceptable.

The court cited a public statement from the High Council of Justice [HCJ]].  This strange document from January 17 claimed that any detention of a judge was “a gross violation of the constitutional guarantees of judicial immunity”,  The HCJ went on to assert that its consent was required even if a person had been “during or immediately after committing a grave or particularly grave crime”.

NABU points out that this ‘statement’ has no legal force.  As reported earlier, the HCJ were essentially trying to override recent amendments to the Constitution and Criminal Procedure Code which clearly stipulate that if a judge has been caught taking a bribe, the investigator can apply to the court directly for his or her detention / house arrest.

NABU considers that the situation which has now arisen “contradicts both the letter and the spirit of the judicial reform.”  They call on the relevant bodies and the public to react accordingly in order to ensure that this does not happen again.

This is a worrying development as the Lviv judge cannot have seriously imagined that the HCJ ‘statement’ was more than simply an expression of their opinion.  On the other hand, as Roman Maselko, a member of the Advocacy Advisory Council, points out, how else was the court to decide after such a directive from the body responsible for appointing and dismissing judges?   This, he believes, is “the first result of pressure on judges from the High Council of Justice”.

Earlier concerns following the HCJ assertion have proven fully justified.  In principle, the HCJ could not have refused to give its consent – but just try to get it quickly.  A judge or any other person can be detained only for 72 hours without a court order.  It would be difficult to get the HCJ to move that fast at the best of times and totally unrealistic in a case like this where most of the initial 3 days fell over a weekend.

There is nothing to indicate that the NABU detectives tried to get this consent, nor, of course, any reason why they should have.

On the other hand, something clearly needs to be done.  The amendments in 2016 were introduced to avoid situations where judges caught taking bribes were able to abscond after being released pending a parliamentary hearing on consent for their arrest.  Judge Mykola Chaus, for example, had managed to flee to Russian-occupied Crimea because parliament was on holiday!

The High Council of Justice was given too much power under the presidency of Viktor Yanukovych which it used to ensure conformity and punish judges who dared show independence.

The constitutional amendments and a bill on the judicial system passed in June 2016 were supposed to introduced vitally needed judicial reform and many of the changes have been positive.  There were warnings, however, at the time that a lot of the ways of exerting pressure on judges had been retained.  Human rights groups then warned that it was dangerous for the High Council of Justice to have the authority to bring disciplinary proceedings against judges.

The Halytsky Court ruling may be a warning that this authority could be used to sabotage crucial efforts to combat judicial corruption.