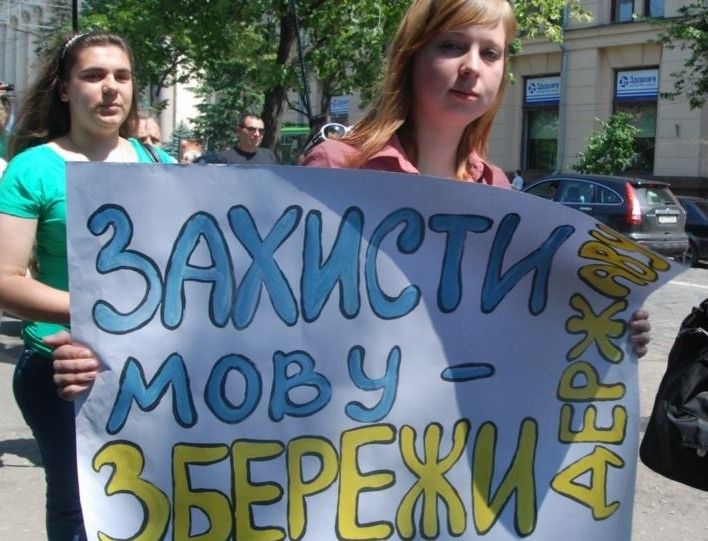 Three draft language laws tabled in Ukraine’s parliament have elicited mixed reactions in Ukraine and a predictable stream of fake news stories and deliberate misinformation from Russian and pro-Russian media.  Not one of the laws has much chance of being passed in their present form, with Mykola Knyazhytsky, the co-author of one of them, acknowledging that all are “patriotic, but contain contentious norms”.  That has not, of course, stopped Russia from falsely claiming that Ukraine has already or is about to ban the Russian language, etc. The refrain that Russian speakers are discriminated against, and that there is a ’Russian-speaking population of Donbas’ supposedly needing Russian ’protection’ go back a long way, but have been openly used as propaganda weapons in Russia’s undeclared war against Ukraine since the Spring of 2014.

The bills were tabled soon after the Constitutional Court’s initial review in Nov 2016 of the highly controversial language law pushed through in 2012 under ex-President Viktor Yanukovych despite mass protest in the country and criticism from abroad.  The so-called ‘Kivalov-Kolesnichenko Law claimed to protect the rights of any minority ethnic group comprising 10% of the population of a region, but in fact simply allowed Russian to become the main language in many regions of the country.  An ill-considered attempt to simply revoke the law in February 2014, the day after Yanukovych fled, has been used ever since in Russian propaganda, including in warmongering propaganda in Donbas.  Almost three years later, the Constitutional Court is finally considering whether the law clashes with the Constitution which states clearly that there is one State language, and is due to give its judgement in the coming months.

The draft bills now before parliament are all aimed at promoting use of Ukrainian and making it the language of the media, of the public authorities, etc. in Ukraine.  At present, a considerable amount of material on television, etc. is in Russian, and a lot of people do communicate in Russian.  The number of people who have consciously shifted to speaking only Ukrainian has increased since Russia invaded Crimea and launched its undeclared war against Ukraine, however many people believe that the change is too slow.  Others, however, warn that ham-fisted attempts to force something which should come naturally will only create division and antagonism.  There is also concern about the failure to consider the situation with the Crimean Tatar language under any of the bills. This is, after all, the language of the main indigenous people of Ukraine.  Many Crimean Tatars have been forced by Russia’s invasion of their native Crimea to move to mainland Ukraine where they may well not live in areas with a large Crimean Tatar population.

All three bills envisage that television and radio should be totally or virtually all in Ukrainian, with similar, though not as stringent, requirements on the  printed press, publishing, cinema and advertising.  Draft bill № 5556, for example, would require all media, regardless of their form of ownership, to carry out national broadcasting in Ukrainian, and to provide parallel interpreting if a person uses another language.

In areas where another language is common, both Ukrainian and the language of the minority group can be used.  Privately owned press should publish at least two thirds of any print run in Ukrainian.

The bills also envisage demands on the use of Ukrainian by public officials, in schools, etc.

Failure to comply with the regulations would result in reasonably steep fines, with at least one of the laws even proposing language ‘inspectors’.

Viktoria Syumar, the head of the parliamentary committee on freedom of speech, does not believe any of the bills can or will be passed as they stand, and is against all three.  She goes as far as to say that the norms of one of the bills are simply providing ammunition for Russian propaganda.

“I can’t imagine a situation where a language inspector fines a pre-school teacher because she spoke with one of the children in Russian, yet that is what one of the laws envisages.”

Iryna Bekeshkina, Director of the Democratic Initiatives Foundation, warns against measures of compulsion. “You can’t force people to love a language.  The need for it first arises, and then all the rest.  For that reason, it’s not worth turning the language issue into a new front”.

Bilingualism in Ukraine, she says, has historic roots, and over the years of Independence, there has been relatively little change in everyday use of a particular language.  In 1992 37% of the population spoke Ukrainian at home, against 42% in 2016.  29% spoke Russian at home against 32% in 2016, and the percentage who spoke either having fallen from 32% in 1992 to 25% in 2016.

What has changed, however, is the level of support for giving Russian official language status in Ukraine.  If in 1996 51% were in favour, only 33% against, by 2016 this had been reversed, with 50% against and only 30% for.   While Russian speakers are more likely to want official status, this is by no means guaranteed, with 26% in 2016 being against and 59% in favour.  There are still regional divides on this issue, though Bekeshkina notes that even in Donbas, where support for the Russian language is high, the numbers have fallen, from 73% in 2013 to 66% now.

All public matters must be in the Ukrainian language – as they would be in any country, however she is against methods of coercion, and advocates positive methods – publication of interesting literature, the showing of good films, etc.

This is one of the many problems with such legislation.  It costs money to produce interesting films, publish the latest books and imposition of rules will be crippling, especially for smaller media and could make them less able to compete with much richer competitors producing material in Russian.

It is not just as good propaganda material that methods of coercion help Russia.  Oleksandr Roitburd also believes that the laws are basically divisive.  You can try to forcibly remove Russian from use, replacing it with Ukrainian.  Maybe 5% of the Russian-speaking pro-Ukrainian electorate will change to Ukrainian.  The others will simply become angry.

The zealous authors of these bills would do well to recall interviews with the many Russian-speaking ‘Cyborgs’ who defended Donetsk Airport, other Ukrainian volunteer fighters and professional soldiers.

Would they want to send in language inspectors to check that men defending their country, and risking their lives are speaking the ‘proper language’?