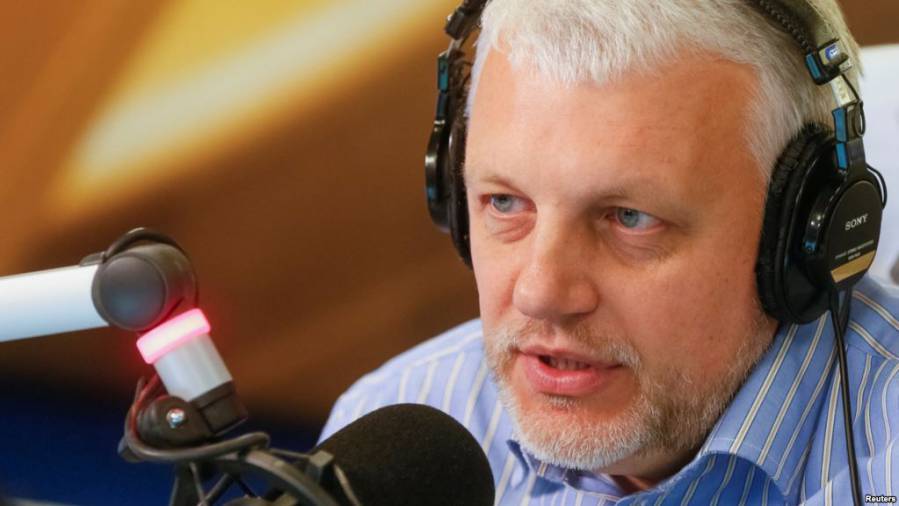 An SBU [Security Service] spokesperson has dismissed one aspect of a journalist investigation into the killing in July 2016 of Kyiv-based Belarusian journalist Pavel Sheremet.  The announcement from Olena Hitlyanska raises one question about the investigation by OCCRP (the Organized Crime and Corruption Reporting Project) and Slidstvo.info, however does not remove or even seriously address the real concerns raised over an investigation which 10 months after Sheremet’s murder remains no closer to being solved.

Hitlyanska reported that Ihor Ustimenko, whom the journalists had identified as an SBU employee, had been dismissed from the SBU back on April 29, 2014.  She noted that they could have learned this before the broadcasting of their program by simply making a formal request for information.

In fact the investigation ends with the suggestion that Ustimenko was either a former or a current SBU employee, which is correct.  Nonetheless, they do appear to have used inside sources to secretly inspect Ustimenko’s records, after Ustimenko himself refused to provide any information.  That source told them that “as of 2014” he was an employee of the SBU which presents a significantly different message to the audience.

The general impression from the program is, however, damning primarily because of the amount that committed investigative journalists have uncovered, seemingly for the first time.  It is hard to hope that this is mere incompetence on the part of the police, however any alternative interpretation for the omissions would seem worse.

The journalists, many of whom doubtless knew Sheremet very well, set about finding CCTV footage that the police might have missed.  They came up with a great deal which they studied very closely.  They also tracked down a taxi driver whose car drove very close to Sheremet’s, as the female suspect is believed to have been planting the remote control bomb.  Judging by the video footage, her accomplice walked within eye distance of the taxi driver before disappearing from view.

Despite assurances from Khatia Dekanoidze, who was then Head of Police, that all taxi drivers had been questioned, this man appeared to learn that he had been close by from the journalists.

The journalist team identified 6 possible witnesses, and found footage showing the face of a man identified by the police, but only ever shown from the back, as possibly able to provide crucial eye witness evidence about the likely killers.  It seems clear that the person has never come forward, and Dekanoidze said in her interview to the journalists that she did not see how his photograph could have been placed on nationwide display.

The journalists believe they were about to follow the believed killers’ movements far beyond the point where the police trail seems to stop.  If their footage is reliable, then one video shows the man and woman much more clearly, including a logo on the hooded jacket that the man is wearing.  This is important since the same hood is seen on a person who walks by the apartment block shortly after Sheremet left his home and drove towards the intersection where the car exploded.  There is quite clear footage of a woman who appears to have been standing along the route that Sheremet took seconds before the car exploded.  Although it cannot be proven from the footage that she is the same woman who appeared to be planting the bomb at around 2 a.m. the previous night, she does later meet up with the man sporting a logo who was seen with the believed killer.

The main question here is how much has genuinely been uncovered for the first time, and how it is possible that the journalists found what the police had missed.

There is, however, considerably more, and it is here that the story becomes murky. Sheremet met with 6 men from the Azov Regiment at about 11 p.m. the previous evening, and they stood talking outside.  While they were talking, two cars can be seen stopping – a Mercedes and a grey Skoda.  The latter was particularly noticed by the Azov men since it was quite late at night, the car engine was switched off, yet there was a man inside. The Azov men were also convinced that there were people carrying out surveillance.

Both Skoda and the Mercedes remained near the scene throughout the planting of the bomb 3 hours later.  When the two cars arrived, they acted as though they didn’t know each, yet 8 minutes later are seen talking.

The Mercedes left 43 minutes after the bomb was planted, with the Skoda which had moved out of camera vision, following it.

The footage was extremely unclear, however a Bellingcat journalist helped them identify the Skoda number plate which led them to a woman in Kyiv who told conflicting stories, but finally admitted that she had agreed to register the car for somebody else in her name.

That somebody else proved to be Ihor Ustimenko who also gave quite contradictory explanations for what he had been doing on the scene, and then stopped talking to the journalists altogether.

How significant this is remains unclear, as does whether this could be linked to Sheremet’s killing.  Sheremet and his partner Olena Prytula had long suspected that they and Ukrainska Pravda, which Prytula founded with slain journalist Georgy Gongadze were under surveillance.  If Ustimenko is indeed an ex-SBU officer, why is he so cagy about what he was doing that night in close proximity to Sheremet’s car as the bomb was being planted?  If he was still an SBU officer at the time, then, once again, why was he there, and why has he seemingly not been questioned by the police?  There are probably many possible answers, but it is at very least disturbing that the questions seem to have first been raised by investigative journalists.

The 44-year-old Belarusian journalist and former prisoner of conscience was killed on July 20, 2016, almost exactly two years after leaving Russian ORT in protest at the virulent warmongering propaganda against Ukraine.  It was a terrible blow to all those who knew Sheremet personally, as well as to the very many in Ukraine, Belarus, Russia and internationally who knew and admired his courage and commitment.  Khatia Dekanoidze then called it a matter of honour to find the killers, and President Petro Poroshenko promised to enlist help from the FBI and European specialists.  10 months on, the investigation does not appear to have found any real leads, though the Interior Minister Arsen Avakov announced back in February that the police do believe Sheremet’s death was linked with his work as a journalist.