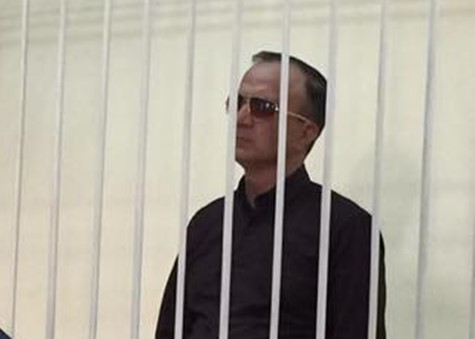 51-year-old Narzullo Akhunjonov was detained on September 20, 2017, shortly after the  Uzbek journalist arrived at Zhulyany Airport in Kyiv, together with his wife and five children, and immediately applied for political asylum.  Border guards had apparently found Akhunjonov’s name on the Interpol wanted list, supposedly on charges of fraud.  There are strong grounds for believing that Akhunjonov was facing persecution for his journalist activities, and would be in real danger if forcibly returned to Uzbekistan.

According to Oleksiy Fedorov, a lawyer from the Ukrainian Helsinki Human Rights Union, Akhunjonov was in charge of the political and educational affairs department for the state broadcasting company in Uzbekistan.  While working there, he made public information about investigations into crimes and human rights abuses committed by members of the authorities in Uzbekistan.

It was this which reportedly prompted his persecution by the authorities, with the journalist and his family subjected to persecution and threats.

They managed to leave Uzbekistan, and had been living for four years in Turkey, where Akhunjonov continued to report on crimes of the Uzbek regime and published a report on these.  Although the family had applied for asylum in Turkey, the situation in the country worsened, and he decided that it was dangerous for them to remain.

Akhunjonov was detained at the airport because Uzbekistan had earlier asked Interpol to issue a Red Notice.

The journalist is being held in a temporary holding facility, while his family are staying with an Uzbek refugee living in Kyiv.  On Friday the Solomyansk district court began considering whether there are grounds for detaining Akhunjonov for 40 days pending extradition.

Akhunjonov is represented by a human rights lawyer, and has been supported by Refat Chubarov, Ukrainian MP and Leader of the Crimean Tatar Mejlis (or representative assembly).  It is therefore to be hoped that he will be released from custody and the family’s asylum application processed.

Any other outcome is unthinkable.  The European Court of Human Rights has consistently applied Rule 39, preventing people from being forcibly returned to Uzbekistan because of the grave danger they would face of torture and persecution.

Akhunjonov’s wife has shown a letter from the BBC confirming that he has worked as a journalist for the last four years and that he had suffered persecution from the Uzbekistan authorities.  The international NGO Reporters without Borders also considers that the family were victims of persecution,  and that due to the close ties between Turkey and the regime in Uzbekistan, Akhunjonov;s life could be in danger in Turkey.  Fedorov says that his client also has a document from the UN High Commissioner for Refugees confirming grounds for believing he and his family are in need of protection..

While Interpol’s readiness to issue Red Notices often arouses concern, in this case the charges against Akhunjonov are ostensibly ‘unpolitical’.  He is accused of fraud in 2009, involving 2 million dollars.  There must, however be questions about when these charges emerged and why since the journalist was only dismissed from a managerial post within the National TV and Radio Broadcasting Company in 2013.