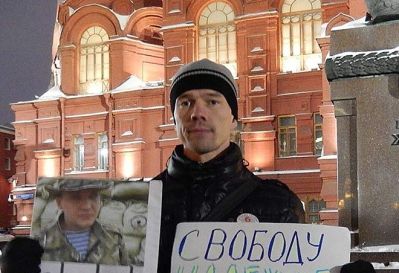 It has long been dangerous in Russia to express support for Ukraine and, especially, opposition to Russia’s annexation of Crimea and aggression in eastern Ukraine.   It is increasingly likely to get a person arrested and, in some cases, such as Rafis Kashapov and Ildar Dadin – imprisoned.

Euromaidan SOS has just issued a statement of protest over Dadin’s sentence in which the civic activists point to clear evidence that the shockingly severe punishment for entirely peaceful protest was in part because of Ildar’s active support for Euromaidan.

As reported here, Ildar Dadin was sentenced on Dec 7, 2015 to 3 years imprisonment under the new article 212.1 of the Russian Criminal Code which allows for up to 5 years imprisonment if a person has received three or more administrative penalties over a 6 months period.  Since Vladimir Putin came to power, it has become standard for police to detain peaceful demonstrators whom they then accuse of ‘resisting the police’ or ‘infringing the rules for holding a demonstration’.  This was what happened to Dadin who was accused of taking part in protests on Aug 6, Aug 23, Sept 13 and Dec 5 2014.   The criminal charges and sentence for exercising his constitutional right to freedom of expression and assembly have been condemned within Russia and abroad.

Euromaidan SOS adds its condemnation and suggests that a decisive factor in the prosecution and sentence may have been Dadin’s “pro-Ukrainian uncompromisingly liberal position”.  This can be seen from the case material, with both the investigators and the court having actively pushed information about Dadin’s position on the so-called ‘Ukrainian question’, as well as his visits to Ukraine.

The material, for example, claimed that he had visited Kyiv three times “in order to gain skills in opposing the police”.  Friends and acquaintances were summoned for questioning by the investigators who asked about Dadin’s trips to Ukraine.

The investigators also tried to claim that Dadin had established contact with members of  the ultra-nationalist Right Sector which Russia has systematically demonized since Euromaidan.  The only ‘evidence’ for such claims was a ‘business card’ supposedly from Dmytro Yarosh, the head at the time of Right Sector.  The said card was doubtless one of the huge number of humorous responses to Russia’s Foreign Ministry claims in April 2014 that Right Sector had been involved in a shootout near Kremlin-backed militant-controlled Sloviansk.   The ministry claims that the remarkably intact business card had been found in a totally gutted out car led to hilarity and a flood of Yarosh card memes on the Internet.   The prosecution in Dadin’s case treated the card seriously, and claimed that Dadin had it for Yarosh’s contact details.

The material also states that Dadin was detained on April 20, 2014 with symbols of “the Ukrainian junta” with these including, in the investigators’ view a T-shird with an image of Taras Bulba, the Cossack leader in Nikolai Gogol’s famous book.

Even the sentence mentions Dadin’s visits to Ukraine.

This is one of the many cogent reasons why Ukrainians should show particular solidarity to Ildar Dadin.  It is also one of the disturbing indicators of how Russia’s justice system has become so degraded, that trips to Ukraine are treated as incriminating evidence. 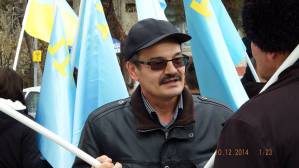 Another such case, reported here, was that of Rafis Kashapov.  The 56-year-old was sentenced in June 2015, with the prosecution claiming and the court accepting that social network posts criticizing Russia’s annexation of Crimea and aggression in eastern Ukraine constituted ‘public calls to violate Russian territorial integrity’ and ‘hate speech’   He has been in detention since Dec 2014, and Russia’s Supreme Court recently confirmed the three-year sentence.  Please circulate the material which clearly demonstrates what kind of criticism of Putin, the Kremlin and its invasion of Crimea and eastern Ukraine can result in serious prison sentences in today’s Russia.

On Dec 25, 18-year-old Vlad Kolesnikov took his life after his brave demonstration of pro-Ukrainian views resulted in him being rejected by his family and mercilessly tormented by his peers.  Russian poet Alexander Byvshev lost his job, faced criminal charges and was added to Russia’s list of so-called ‘extremists and terrorists’ for poems in which he condemned Russia’s invasion of Crimea.  It is likely that the five year sentence passed on Russian blogger Vadim Tyumentsev was so harsh because of a video clearly demonstrating opposition to Russia’s military engagement in Donbas.  Yekaterina Vologzheninova, a solo mother from Yekaterinburg is on trial accused of ‘inciting inter-ethnic enmity’, otherwise known as reposting material and ‘liking’ social network posts critical of Russia’s policy with respect to Ukraine

Euromaidan SOS calls on the Ukrainian public to express solidarity with citizens of Russia defending those same values that Ukrainians upheld on Maidan and expressing a pro-Ukrainian position despite the danger this exposes them to.  The international community, the activists stress, must also use any means available to put pressure on Russia’s leaders to stop such persecution.

It also calls on Ukraine’s Foreign Ministry to publicly react in cases where Russians face persecution for expressing a pro-Ukrainian position.

One other call should surely be added.  An increasing number of Russian citizens have been forced to flee to Ukraine.  76-year-old Vladimir Ionov, for example, was about to face sentence on the same monstrous anti-protest charges.  He is now in Kharkiv.  Pyotr Lyubchenkov, one of the civic activists who tried to hold a peaceful march in support of greater federalization for Kuban last September has been in Ukraine for the last year.  Despite the fact that another of the activists Darya Polyudova was recently sentenced to 2 years imprisonment after her initial arrest over the planned march and inclusion on Russia’s Federal List of Terrorists and Extremists, there are ominous suggestions that Ukraine could send Lyubchenkov back to Russia.

There can be no excuse for Ukraine’s authorities abetting Russia in persecuting its nationals.  This is true in any situation, but especially clear when we are talking of people facing persecution for opposing Russian aggression against Ukraine.