Ukraine accused of mounting reprisals against anti-corruption activistsReturn to Selective Justice Feared in Ukraine over Prosecution of Anti-Corruption ActivistMystery tax probe condemned as more pressure on Ukrainian anti-corruption NGOsUkraine’s prosecutor investigates journalist, not the corrupt judges he exposedJournalists under investigation for divulging judges’ rulings from foreign beachesRigged and Secretive Fight against Corruption?Government accused of rigging anti-corruption selection commissionHead of Traffic Police Dismissed after Scandalous Lifestyle ExposedIt’s Tax Time In Ukraine, And Financial Discrepancies Suggest Corruption EnduresBehind the declarations: how public officials lived – and live nowParliamentarians’ secrecy regarding income given judicial OKVerkhovna Rada and Constitutional Court least willing to divulge public informationCourt rejects Verkhovna Rada claim that staffing details are not for the publicOPORA takes secretive Verkhovna Rada Office to courtCHESNO: Office of the Verkhovna Rada flagrantly violating Public Information ActUkrainska Pravda takes parliament to court over concealed informationResidences of Azarov, Lytvyn and Yushchenko to cost the taxpayer 50 million UAHCourt has no problem with parliament not handing over MP’s declarationsVerkhovna Rada Office refuses to hand over Deputies’ declarationsPublic Information Law like a Bolt from the Blue for the Authorities
• Topics / Social and economic rights 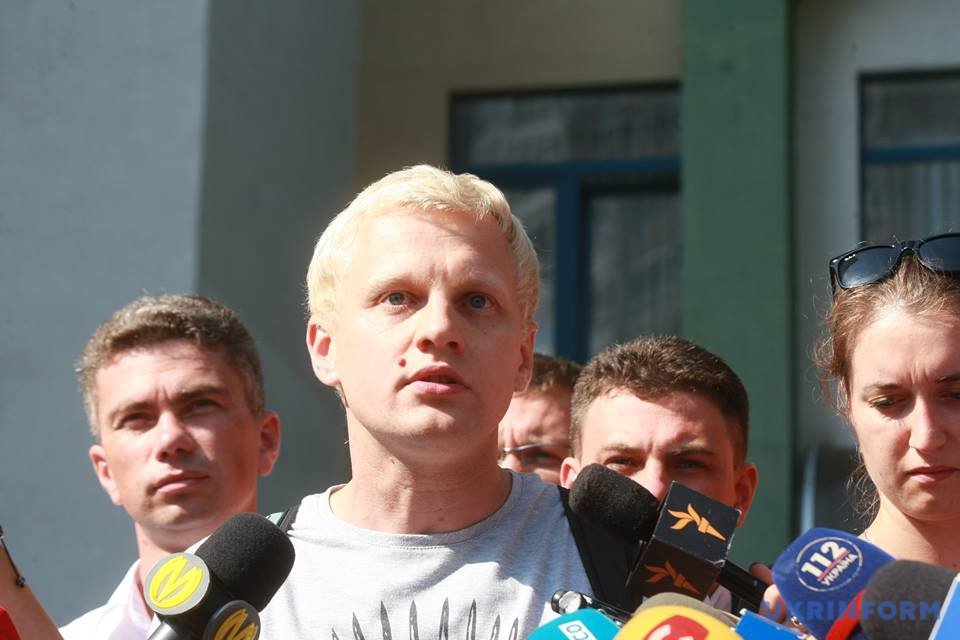 Ukrainian media watchdogs and human rights NGOs have reacted with anger to the new charge laid against anti-corruption activist Vitaly Shabunin. They accuse the authorities of using legislation intended to protect journalists’ rights against those who get in their way, while failing to properly investigate real cases of violence against or obstruction of journalists.

Shabunin, was informed on January 15 that the charges against him over an incident where he punched Vsevolod Filimonenko have been reclassified as ‘threats or violence against a journalist’ (Article 345-1 § 2 of the Criminal Code).  This is a more serious charge and could, if Shabunin is convicted, carry a five-year prison sentence.

Detector.Media and the Institute for Mass Information [IMI] have issued a joint statement, rejecting any grounds for such a change in the charges.  The ‘Shabunin case’ is not linked with any journalist activities by Filimonenko, and it is quite clear from the video recording that the conflict arose for personal reasons.

The authors therefore see no grounds for the change to this more serious charge.  “At the same time, we call for swift and unbiased investigation into attacks on our journalist colleagues which are linked with their professional activities. We would note that not one attack on journalists by law enforcement officers in 2017 has yet reached the courts and been properly investigated. Not one of the assailants has received fair punishment. For example, Yury Krysin, who was involved in the murder of journalist Vyacheslav Veremiy was sentenced under a charge of ‘hooliganism’.

We believe that such facts demonstrate lack of desire by the authorities to investigate cases of obstruction of journalists’ professional activities, and of the use of articles of the Criminal Code as a means of persecuting those they find inconvenient.” (the statement can be endorsed by writing to info[at]detector.media.)

There was concern over this prosecution from the outset, especially since it came after other disturbing measures directed against Shabunin and the Anti-Corruption Centre [AntAC] which he heads.

At least 35 human rights groups have endorsed the Human Rights Agenda’s statement criticizing the move which they see as politically motivated.  They point out that Article 345-1 § 2 requires that the aggrieved party was at the time of the offence a journalist and that the accused was aware of this, and that the attack was motivated by the person’s journalist activities. . They agree with the media groups that none of this was the case.

They also note that 10 investigators are involved in this case, which is outrageous if compared with the number assigned to investigate the vast number of crimes linked with Euromaidan.  The country’s leaders call the latter “a matter of honour”, yet can find so many investigators only for the suspect prosecution of a civic activist exposing corruption in high places.

The incident in question took place on June 8, 2017 near a military recruitment office.  The fact that Shabunin had received a summons was already strange, as he is not liable for conscription.  This appeared to be part on an ongoing campaign against the anti-corruption activist, in which Filimonenko was playing an active part.  The latter’s ‘journalist’ status is disputed by many people who consider his activities to be more that of a provocateur.  He had previously posted a video of Shabunin being handed the summons, claiming that the activist had been evading mobilization.

He was then waiting, while one of his companions stood by videoing everything,  when Shabunin drove up.  The activist immediately stated that he did not permit Filimonenko to video him and continued walking.  Filimonenko ran after him and can be heard on the video saying something about Shabunin’s accusation that he had upset Shabunin’s colleague Oleksandra Ustinova.

The Ukrainian prosecutor has now decided to treat the above as having been “an attack on a journalist”.  The video footage does indeed suggest that there are no grounds for such a qualification.  The prosecutor’s proactive approach here is also in stark contrast to its stubborn refusal to hold the employees of the Security Service to answer for an attack on two investigative journalists Mykhailo Tkach and Kyril Lazarevych who were, indisputably, carrying out their journalist duties.

This is not the first time that Shabunin and / or AntAC have aroused a suspicious amount of activity from the law enforcement bodies.

In March 2016, the Prosecutor General’s Office obtained a warrant allowing its investigators to remove documents and other items from the NGO, and also to demand access to confidential information from its  bank.  All of this was supposed to be part of an investigation into the disappearance of money donated by US and European partners for reforming the prosecutor’s service.  The investigation seemed overtly nonsensical and was eventually abandoned.

Such moves have been viewed by AntAC itself, other civic organizations and, seemingly, international partners, as attempts to put pressure on an NGO fighting corruption.

In August 2017 Transparency International in Ukraine warned that public reprisals against anti-corruption activists were gaining pace and called on activists to inform about all such cases “in order to inform international partners about the dangerous situation”. The criminal proceedings against Shabunin were cited as “the most telling example of political pressure and selective justice”.