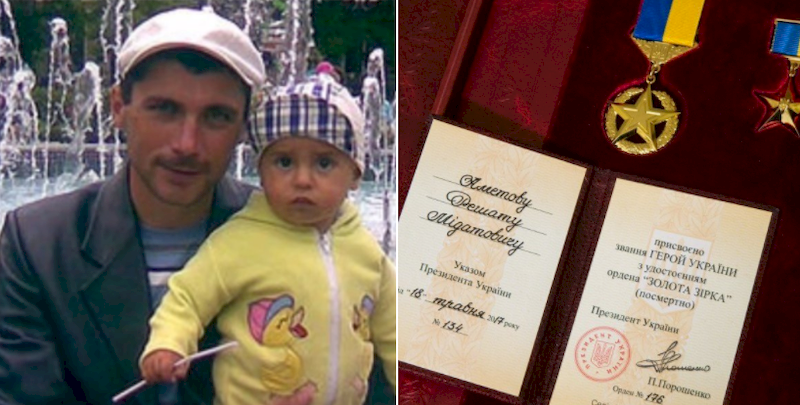 It is four years since Reshat Ametov was abducted from his silent protest at Russia’s invasion of his native Crimea and savagely tortured to death.  On the eve of the anniversary, President Petro Poroshenko entrusted to Refat Ametov his brother’s Hero of Ukraine honour and posthumous Gold Star award.

The 39-year-old Crimean Tatar “wanted his three children to grow up in a free Ukraine”.  The evening before, he had tried to persuade around 30 neighbours who were guarding their village as armed paramilitaries helped Russian soldiers take control, to join him on March 3, 2014 in peaceful protest.  They were fearful and advised him to stay home himself, reminding him that he had small children.

Reshat clearly felt unable to remain passive and in the early morning left home, without telling his wife where he was going.  He took position on the square outside the Crimean parliament, holding a Ukrainian flag.  He spoke with journalists if they approached him, but otherwise stood in silent protest.   He had been there for about an hour and a half when he was abducted by armed paramilitaries.

In an interview, Lerane Khaibullaeva, a close friend of the family who took part in the desperate search back in 2014, spoke of how Ametov had always “had a very clear civic position. He had, after all, come out in protest for the sake of his children.  He had always wanted them to live in a free, democratic country.”