“We’re not celebrating today” – digest of Russian protests (early June 2022)ECHR rules too late against Russia’s notorious ‘foreign agent’ law and hardly moves over violations in occupied Crimea Savagely tortured Ukrainian journalist sentenced to six years by Russian occupation court Number of political prisoners in Russia and occupied Crimea hits a symbolic milestone“Memorial” cannot be closed – it is the need to know the truth about the tragic past: statement of the Ukrainian human rights organizationsRussia equates defending political prisoners to ‘justifying terrorism’ in ban on Memorial Human Rights CentreRussia announces ‘Ukrainian spy and saboteur’ arrests while accusing Ukraine of a military build-up in DonbasTrying to liquidate the Memorial, Russian authoritarian regime digs its own graveDefender of Russia’s Ukrainian political prisoners jailed and fined for picket against attempt to destroy Memorial Russia claims that by naming its political prisoners, Memorial is ‘justifying terrorism’ Russia moves to dissolve Memorial NGOs that defend political prisoners and expose Russian aggression against Ukraine Russia blocks OSCE conference when prevented from spreading disinformation about occupied Crimea and Donbas FSB deploys menacing new weapon against journalists and lawyers in Russia and occupied Crimea Ukrainian Police Open Murder Case After Finding Missing Belarusian Activist "Hanged" In KyivA brief description of the KHPG strategic litigations in the first half of 2021So what will “New SBU” be?Russia threatens criminal prosecution over calls to impose sanctions A brief description of the KHPG strategic litigations in July–December 2020Russian propagandist seized by Donetsk militants ‘for spying for Ukraine’ Russian legislators launch multiple hits against civil society in occupied Crimea and Russia
• Topics / Freedom of peaceful assembly
• Topics / NGO activities 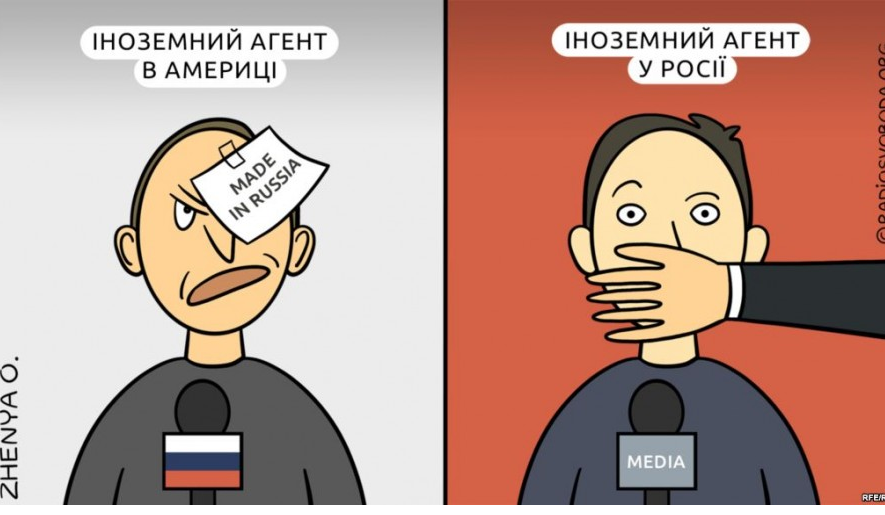 One of the main factions in the governing coalition is planning to table a bill on registering ‘foreign agents’ in Ukraine.  The move is purportedly aimed at protecting ‘national interests’, however human rights groups are unconvinced.  A lawyer from the Ukrainian Helsinki Human Rights Union [UHHRU] warns that such a law would create a legal mechanism for crushing civic initiatives, which is exactly what an analogous law in Russia is used for now.

Maksym Burbak, leader of the People’s Front in parliament asserts that the initiative is needed as Ukraine enters a period of elections.  “We need to recognize that there is a widespread network of masked and open Russian agents at work in Ukraine.  They take television channels and other media under their control and juggle around with their political pawns”.  He also mentions Rossotrudnichestvo, the Russian agency which claims to be aimed at the implementation of state policy of international humanitarian cooperation and at promoting “an objective image of contemporary Russia” abroad.  Burbak says that Rossotrudnichestvo produces a vast number of purported civic organizations that are dependent only on Russia.  The Kremlin, he adds, is using democratic liberties and institutions in Ukraine and throughout the West for action aimed at undermining democracy, spreading chaos and confrontation.

He cites the USA’s Foreign Agents Registration Act [FARA] as the model for their initiative and notes that in 2017 the USA forced the Kremlin-funded Russia Today channel to register as a foreign agent.

The idea would be that media and NGOs which are recognized, according to this law, as being foreign agents would need to inform Ukrainian citizens that they are acting in the interests of a foreign state.

He does stipulate that they are proposing only that this would cover foreign agents directly or covertly acting in the interests of an aggressor state.  At present, this applies to one country only, that being Russia.

The first problem with such an initiative is the fact that it is not new.  The ‘Dictatorship laws’ which the ruling Party of the Regions pushed through parliament on 16 January 2014 in an attempt to crush the Euromaidan protests included a bill introducing the same ‘foreign agent registration’ requirements as in Russia.  The Viktor Yanukovych regime was forced to back down on 28 January 2014, and while many of the repressive bills were slipped through shortly afterwards, one proposed on ‘foreign agents’ did not get passed.

UHHRU lawyer Olena Semyorkina says that experience in talking with the authors of various such initiatives about strengthening control over civic organizations shows that they do not understand the essence of the legislation which they are copying.  They either don’t know or selectively interpret or apply international guarantees and standards regarding freedom of speech and of association.

Ukraine’s reputation has already been damaged, she warns, by the introduction of electronic declarations for civic activists.  The original bill which President Petro Poroshenko signed into law in March 2017 was widely condemned within Ukraine and abroad as a weapon against journalists and NGOs fighting corruption.  Despite constant assurances that this requirement would be removed, and strong criticism of the bill from the Council of Europe’s Venice Commission and OSCE / ODIHR, the requirement to fill out these declarations remains in force.

In alternative reports (to those presented by the Government), Ukrainian human rights groups have spoken of a threat to civil liberties from such laws and other measures targeting NGOs.

This is by no means intended to minimize the problem that Burbak identifies which is real.  The measures to counter it must be effective, and not themselves present scope for abuse.  Since the media and NGOs’ referred to are often formally initiated by Ukrainian nationals, the law would not even help.

The US Foreign Agents’ Registration Act does sound like a method which at least helps to alert the public to the fact that, for example, a television channel like RT [Russian Today], which purportedly provides the same service as any other media, is in fact, serving the interests of a foreign state.  The American bill has, however, been criticized for being applied selectively.  Judging by the number of years that Paul Manafort was able to freely act as a foreign agent without any obstruction, the requirement to register as a foreign agent is (or, at least, was until the Robert Muller investigation) very often simply ignored.

Russia’s Law on so-called ‘foreign agents’ was first passed in 2012.  Russian NGOs engaged in something termed ‘political activity’ and receiving any funding from abroad had to register as a ‘foreign agent’.  The law was boycotted by a lot of civic organizations, so in June 2014 Putin signed into force a law which allows the Justice Ministry to forcibly include organizations on the register with this significantly restricting their rights and possibilities.  A new law which Putin signed exactly one year later was slammed by rights organizations as being aimed at destroying civil society altogether.  In that 2015 law, political activity’ was defined so widely as to mean that it could include criticism of corrupt officials, or groups of citizens who band together in defence of socio-economic rights.

In practice, the law has been used against human rights organizations like the Memorial Society for publicly calling Russia’s actions in Ukraine military aggression and the Crimean Human and against Krym.Realii, one of the few sources of reliable information about human rights abuses in Crimea under Russian occupation.