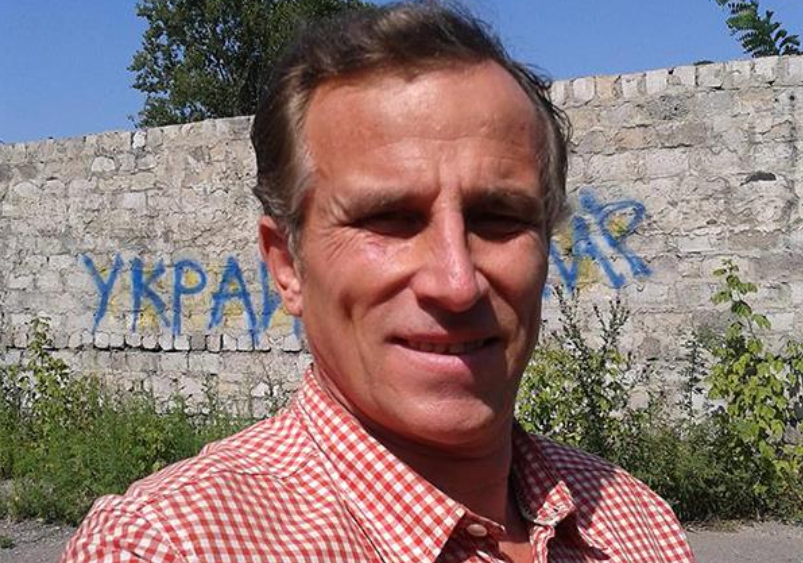 At least two Ukrainians are imprisoned in the self-titled ‘Donetsk people’s republic’ [DPR] for writing honestly about life in occupied Donbas.  Most is known about journalist and blogger Stanislav Aseyev, but it is clear that Oleh Halaziuk was also taken prisoner for his pro-Ukrainian views and the articles he published in Ukrainian under a pseudonym for Radio Svoboda, Obozrevatel and other Ukrainian websites.  His imprisonment, and his writing in the face of real danger should be heeded by all those who assume that Ukrainians who remained in the so-called ‘republics’ did so out of pro-Russian sentiments, or similar.

Halaziuk was seized at the end of August 2017, although it was only after one of the hostages freed on 27 December was able to bring out a note from him that his colleagues at Radio Svoboda lodged a formal report with Ukraine’s Security Service [SBU].  According to Lina Kushch from Ukraine’s National Journalists’ Union, it is only quite recently that his relatives gave permission for his name to be reported in the reports of the Office of the United Nations High Commissioner for Human Rights.

Halaziuk is from Torez (or Chystyakove) in the Donetsk oblast, where he appears to have lectured in philosophy before the Russian-led conflict in 2014.  He has never concealed his pro-Ukrainian views and was first seized and tortured by the militants back in 2014.

On that occasion, he was finally released and went to Kyiv where his brother lives. It was difficult with his relatives and he himself was unable to find work. “Nobody needs a philosopher in Ukraine”, he wrote to Sergei Kosyak, the Donetsk Pastor and volunteer, who was himself tortured by militants.

Halaziuk returned to Torez, where he lived alone, writing sometimes for Radio Svoboda under the pseudonym Myroslav Tyamushchy [somebody of lucid thinking].  His articles pull no punches, neither in subject matter, nor in the blunt language in which he speaks of the conflict as being “Russia’s undeclared war against the Ukrainian people”.

In one article, Halaziuk described how, on the third anniversary of the downing on 17 July 2014 of Malaysian airliner MH17, he walked almost 20 kilometres in the direction of the place where the plane came down and left flowers “for all Ukrainians who bow their heads in remembrance of the slain passengers of MH17”

Such honesty is impossible in the so-called ‘republics’ and it was only a matter of time before he was ‘denounced’.

It is simply impossible that he did not understand the danger he faced and it is worth recalling Halaziuk’s words about the situation in occupied Donbas.

“I am tormented by a feeling of pain for those citizens of Ukraine who have remained in occupied Donbas.  Now something terrible is happening, the wholesale blaming of people who live there, the claiming that they are traitors. Yet you can’t paint everybody with the same brush and there are Ukrainian patriots who live there and, risking their life, continue to fight. … There are more and more voices heard saying that you need to create a blockade against these people, shut them off, not let them through… This is very unfair.  Many people are not in a position to leave and you can’t ignore them, abandon them there.”

Halaziuk went on to mention those who had been ‘zombified’ by the constant flow of Russian propaganda.

The uses of propaganda were well understood by Russia who ensured that all Ukrainian channels were blocked as soon as militants seized a particular area in Donbas.  Since then most free Internet channels have also been blocked.

In occupied Crimea, Russia is currently using arrests on fabricated charges, torture, and other forms of pressure to try to silence those civic activists and journalists who tell the truth about what is happening under Russian occupation.

In the so-called Donbas ‘republics’, people like Halaziuk and Aseyev, as well as others, have been imprisoned in order to silence voices against the zombifying propaganda.

There are 13 Ukrainian POWs in occupied Donbas, and, at the very least, 89 civilian hostages.  Their release also depends largely on pressure brought to bear upon Russia.  Please help by ensuring that politicians and media organizations in your country are aware of the fate of courageous bloggers and journalists like Halaziuk and Aseyev.