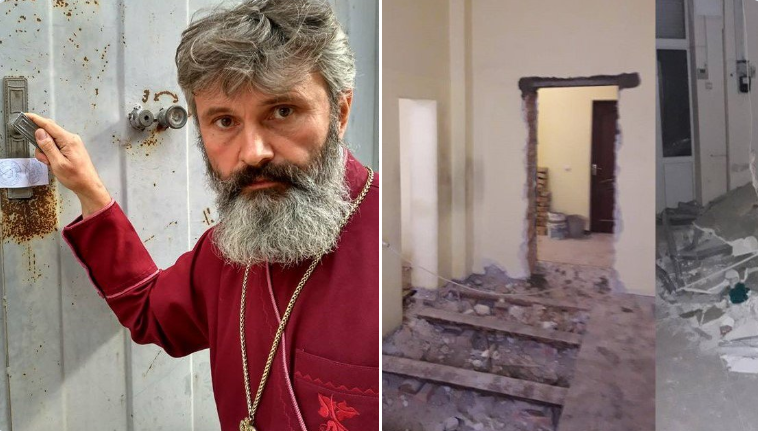 Less than a month after the Russian occupation regime seized the main premises of the Ukrainian Orthodox Church in Crimea, the inside of the building has been devastated and all Church items simply stolen. Archbishop Klyment, who has made the photos from inside the premises of the Cathedral of Vladimir and Olga and of the Eparchiate public, says that the plundering took place while he was not in Simferopol.  Presumably a large wooden Cross was not viewed as valuable enough to steal, and it has been dumped together with workmen’s equipment and sundry items in one of the photos.

Archbishop Klyment is convinced that if Russia does not stop destroying the Church, it will face new sanctions. These attacks on the Church, he says, are a blow to Ukrainians for whom the Church, since 2014, has provided the only heart h for their Ukrainian identity since annexation.

The Cathedral is in the centre of Simferopol and the Russian occupation regime had their eye on it from the start.  Archbishop Klyment has said that back in 2014 he was offered 200 thousand dollars to hand over the building.  He of course refused and the occupiers set about simply stealing it.  Although formally not owned by the Ukrainian Orthodox Church, it was under long-term lease following an agreement signed in 2002 between the Ukrainian authorities (the Crimean Property Fund) and the Crimean Eparchy of the Ukrainian Orthodox Church under the Kyiv Patriarchate (which is now the Orthodox Church of Ukraine, or OCU].

Although the attack on the Ukrainian Orthodox Church began almost immediately after Russia’s invasion and annexation, the battle to seize control of the Cathedral became totally open in January 2016. Then the Russian-controlled Crimean Arbitration Court issued a ruling ordering the Church to vacate 112 m²  of the premises and to pay a prohibitive half a million roubles, claimed to be for communal services. The appeal against that ruling was rejected in June 2016.

Then on 31 August 2016, Russian-controlled enforcement officers and bailiffs, many of them masked, burst into the Cathedral, blocked the entire premises and used physical force against the Archbishop.  On that occasion, as well as causing damage,

they removed a cross, church chalices, rare icons and some items of porcelain and crystal that had been given to the Church, as well as rugs.  No inventory was made of the items and Klyment was not given any document to sign.

The occupation regime was not content with just part of the building, and on 8 February 2019, Archbishop Klyment reported  that he had received a writ ordering that he vacate the entire Cathedral within 30 days.  The Archbishop then warned that this was likely to lead to eight parishes in rural areas also being forced to close.

On 28 June, the ‘Arbitration Court’ ordered the Eparchiate to hand the Cathedral over to the so-called Crimean ministry of property and land relations, and also to pay almost five thousand UAH in court duty.

Serhiy Zayets, who is representing the Crimean Eparchy’s interests at the European Court of Human Rights says that this ruling effectively means the physical dissolution of the Crimean Eparchiate, since this has now been stripped of its premises.   The local occupation authorities did not even bother to wait for the court ruling and began ‘repairs’ in the building, with the dismantling of the roof resulting in a significant part of the Cathedral being flooded.

Although the move is certainly about seizing control of a major site in Simferopol, it is also part of the aggressive offensive and repressive measures against the Ukrainian Church in Crimea since annexation and against Klyment himself.  He was detained on 3 March, when he was already seated on a coach to Rostov in Russia for the latest hearing in the ‘trial’ of Russia’s youngest Ukrainian political prisoner Pavlo Hryb.   Two pretexts were found, both insultingly implausible, for holding Klyment in detention until late evening.  It is possible that the occupation authorities were planning administrative arrest, but were deterred by the publicity the move received (details here).

In just the first year, 38 out of 46 parishes ceased to exist, and in at very least three cases, churches were seized by the occupation regime:  in Sevastopol; Simferopol and in the village of Perevalne.  Of 25 priests in 2014, by October 2018 there were only four.

Russia is very clearly trying to drive the Ukrainian Orthodox Church out of Crimea and remaining believers underground – one of all too many echoes from Soviet times since Russia’s annexation.