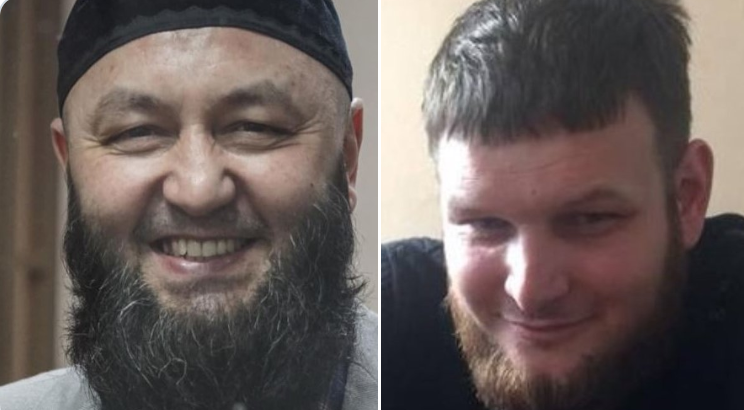 Crimean Solidarity has lodged an important new initiative in occupied Crimea, in which members of the community “become the voice” of the mounting number of political prisoners whom Russia has imprisoned for their faith and civic activism.  Some of those who have made videos about the prisoners as part of the ‘Become their Voice’ [«Стань их голосом»] initiative know from direct experience how important acts of solidarity and practical assistance are to the direct targets of repression and to their families. Very many of the Crimean Tatar political prisoners are civic activists whose arrests on fictitious ‘terrorism’ charges followed their tireless work in helping victims of repression.  At least nine men are imprisoned also for acting as civic journalists, ensuring that information was circulated within Crimea and beyond, given Russia’s elimination of independent media.

Aliye Dehermendzhi is both the wife and mother of two former political prisoners. Her son, Mustafa Dehermendzhi was imprisoned for almost two years, and then long held under house arrest, for his refusal to provide false testimony against Crimean Tatar Mejlis leader and political prisoner Akhtem Chiygoz.  Despite the fundamental lawlessness and racist nature of the charges,  he was still ‘convicted’ and received a suspended sentence.  Then on 23 November 2017, Mustafa’s father, Bekir Dehermendzhi was arrested together with three other respected members of the Crimean Tatar community after a violent ‘operation’ in which the Russian FSB tried to arrest, and instead caused the death of 83-year-old Vedzhie Kashka, a world-renowned veteran of the Crimean Tatar national movement.  The charges were preposterous, yet Bekir Dehermendzhi, whose state of health should have precluded his detention, was held in custody for a year, and then under house arrest until their ‘convictions’.

Small wonder that both Aliye Dehermendzhi and her daughter, Mavile, chose to speak of political prisoners whose warmth and humanity were of such help when they were in need.

Aliye Dehermendzhi recalls how she met Crimean Solidarity civic activist and philanthropist Marlen (Suleymanov) Asanov when she was in a desperate state because of the imprisonment of her son.  He came with two other men, including Crimean Solidarity co-founder – and now fellow political prisoner -  Server Mustafayev.  They were so supportive that, she says, after they left, she felt as though she had gained three sons.

By profession, Asanov is a teacher of Crimean Tatar Language and Literature, however in Bakhchysarai he opened and ran the Salachik Cultural and Ethnographic Café.  He had long been known for his generosity in helping people in need and when the armed searches and arrests under Russian occupation began, he became an active member of Crimea Solidarity.  The latter had been formed to help political prisoners and their families, including children who had been profoundly traumatized when men brandishing machine guns burst into their homes and took their fathers away.

Asanov played an active role in providing material support for such families, buying medicine or clothes for the children of political prisoners, paying for operations and so forth. Meryem Kuku, whose human rights activist husband, Emir-Usein Kuku, has been imprisoned since February 2016, recalls how Asanov and Timur Ibragimov came to her to check whether she needed any help with heating, with repairs to the home, whether the couple’s two children had everything needed for the approaching winter.

In December 2017, Asanov was named Ukraine’s Volunteer of the Year. He was, however, no longer able to receive the award in person.  On 11 October that year, he, Timur Ibragimov; Ernes Ametov; Memet Belyalov; Seiran Saliev and Server Zekeryaev were arrested after the latest armed searches.  This was the first mass offensive against Crimean Solidarity activists, with virtually all the men civic activists, and three of them, including Asanov, also serving as civic journalists.  The attack became even more overt on 21 May 2018 when the FSB came for Crimean Solidarity Coordinator and co-founder, Server Mustafayev and activist Edem Smailov.

Asanov has four young children.  His eldest son, Said, had always wanted to be an architect.  That changed after his father’s arrest, and he now plans to become a lawyer “to help people and to defend the innocent”.

Said and his two brothers, Suleyman and Eskender, travelled with their mother to Rostov (Russia) on 15 November, for the first hearing in the ‘trial’ of their father.  They would not have been allowed into the courtroom but clearly hoped for at least a glimpse of Asanov.  Each was dressed in a T-shirt with a picture of their father, and different captions: “Marlen Asanov imprisoned for two years”; “Baba [Daddy], you are my hero” and “Baba, we love and are waiting for you.”

Not one of the men, who have all been recognized by the Memorial Human Rights Centre as political prisoners, is accused of any recognizable crime.  Russia has laid absurd ‘terrorism’ charges on the basis of unproven involvement in the peaceful Hizb ut-Tahrir moment which is legal in Ukraine.  Everybody about the case, including the lack of any clarity as to what specifically they are accused of, is deeply flawed, yet this is unlikely to stop the Russian military court from passing the sentences demanded of them.  In Asanov’s case, that could be up to 20 years.

Mavile Dehermendzhi first met Remzi Bekirov when the civic activist and journalist visited the ‘court’ hearings in the case involving her brother.  She got to know him better when, together with other Crimean Solidarity activists, he visited the hearings against her father, and reported on the shocking violations in court.  A just, honest and kind person, she calls him, whom no misfortunate left untouched.

“Unfortunately, we live at a time when a person, for his thoughts, actions, for the truth, can be labelled a terrorist, extremist or ‘extortionist’.  Mavile goes on to ask how, in that case, one should call the people who savagely tortured to death 39-year-old Reshat Ametov, who was peacefully protesting against Russia’s invasion.  What do you call the people who abducted Ervin Ibragimov or who burst into people’s homes, terrifying children and men’s wives, and arresting the best of men.

Remzi Bekirov was arrested on 27 March 2019, when Russia effectively dropped any pretence and arrested 24 Crimean Tatar civic activists and journalists.

A historian and tour guide by profession, and father of three small children, Bekirov became one of the first Crimean Solidarity civic journalists, reporting on armed searches, arrests and politically motivated trials in occupied Crimea.  It was he who streamed information about the detention in early March of Archbishop Klyment and who helped make sure that the mounting repression against Crimean Tatars did not go unnoticed.

His activities had certainly been noticed by the Russian FSB and he had faced sundry repressive measures since early 2017.  He refused to be cowered and continued providing coverage of repression, and was also a major initiator of efforts to help the families of political prisoners. He had recently become a correspondent for Grani.ru, one of the best independent Russian websites.  Like Asanov, he is paying a huge price for his civic position, with the same ‘terrorism’ charges and likely huge sentence as against Asanov and very many other Crimean Tatar civic activists and journalists.