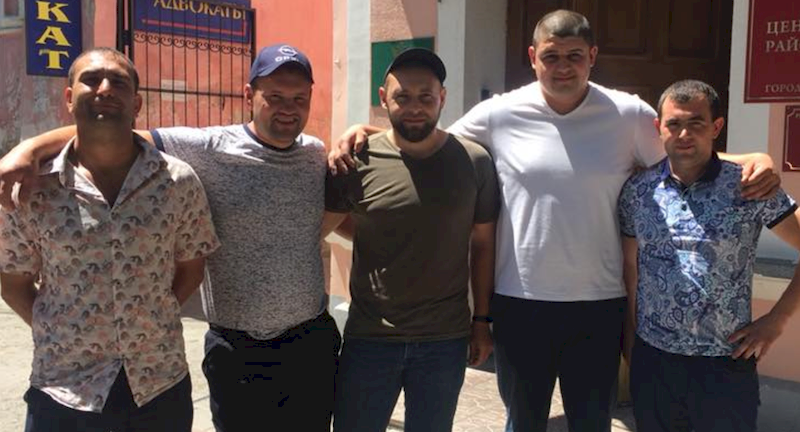 A ‘court’ in Russian-occupied Crimea has passed suspended sentences against five Crimean Tatars accused, as had been Crimean Tatar Mejlis leader Akhtem Chiygoz, of taking part in a perfectly legal pre-annexation demonstration over which Russia had no jurisdiction.  The ’trial’ did not only breach fundamental principles of law, but was also in violation of Russia’s own criminal code (Article 12 § 3).   The lawlessness did not prevent the ‘courts’ in occupied Crimea from holding two of the men – Ali Asanov and Mustafa Degermendzhy – in custody for two years, and under house arrest for a further year.  Both men have now received four and a half year suspended sentences, while Eskender Emirvaliev and Arsen Yunusov received four-year suspended sentences and Eskender Kantemirov  - a 3.5 month suspended sentence.  Two other men – Talyat Yunusov and Eskender Nebiev – had received shorter suspended sentences much easier after agreeing to ‘plead guilty’ on condition that their plea would not affect the other men’s sentences.

The arrests of those men, and a huge number of armed searches of other Crimean Tatars’ homes were essentially part of a mounted offensive against the Mejlis, or representative assembly of the Crimean Tatar people, and Akhtem Chiygoz, the highest-ranking person in the Mejlis after Russia banned Mejlis Head Refat Chubarov from his homeland within months of its invasion.

Chiygoz was arrested on 29 January 2015 and charged with ‘organizing a mass riot’ in connection with the demonstration on 26 February 2014.  The other men were accused of taking part.

There was no mass riot that day, although even had there been, Russia would still have had no jurisdiction over a demonstration that took place on Ukrainian territory.

There were two demonstrations on 26 February 2014, which largely coincided in time and space.  One was organized by the Mejlis, with around 10 thousand Crimean Tatars, Euromaidan activists and other Ukrainians gathering to block any attempt by parliament to push through a change in Crimea’s status.  The Russian Unity party, led by Sergei Aksyonov organized a counter-demonstration, with around 4 thousand pro-Russian demonstrators.

Having been prevented from achieving an effective coup through a parliamentary ‘extraordinary session’, Moscow ordered Russian soldiers to seize control early the next morning.   Several hours later, a ‘parliamentary session’ was forced through by the soldiers without insignia but with very real Kalashnikov rifles, and Aksyonov was installed as ‘leader’.  The ‘trials’ of Chiygoz and of the seven other Crimean Tatars bore the hallmarks of politically-motivated persecution, probably motivated by revenge for having foiled the Kremlin’s plan for seizing Crimea without soldiers and the resulting international condemnation (further details here and here).

During his final address to the ‘court’ that sentenced him to eight years’ imprisonment, Chiygoz stated that the so-called ‘26 February 2014 case’, was aimed at intimidating the Crimean Tatar people, crushing and minimizing their activeness in defending their rights, their support for Ukraine and their refusal to recognize the illegal annexation of Crimea.

There were two deaths that day, but both were in the area where pro-Russian demonstrators were gathered and one died of a heart attack.  With respect to the death of Valentina Korneva, her husband has specifically stated that he does not think the men on trial had anything to do with it, and that it was probably paid thugs brought to the demonstration in two coaches by the pro-Russian side. Although the deaths were constantly mentioned to give the impression of real crimes, not one of the men was charged in connection with them.  They were used, however, in Russia’s cynical attempts to deny discrimination against the Crimean Tatar people and ethnic Ukrainians at the International Court of Justice (see: Russia lies about its most openly anti-Crimean Tatar trial at the Hague )

The charges against all the men were woolly and unclear.  The men were alleged to have disobeyed police orders, though nobody could sensibly explain to them when this had taken place.  All stated clearly that they had neither received, nor disobeyed, any police orders.  Any such orders would, of course, have been issued by one Ukrainian to another Ukrainian and not even remotely within Russia’s jurisdiction.

All of these facts were ignored.  It was clear from the video that Asanov had been twice hit or sprayed with tear gas, yet it was he was accused of trying unsuccessfully to hit the man who had hurtled a plastic bottle that hit him on the head.

There was one other crucial question in this case, and it was mentioned by Degermendzhy during his final address on 14 May to the Russian-controlled Central District Court in Simferopol.

This prosecution, he said, was characterized by the response he received from ‘investigator’ Pavel Nikel.  “In response to my question why in this criminal prosecution only Crimean Tatars are on trial, he said something apparently very simply, but totally characterising it.  He answered my question with the words: “The victors are not put on trial”.

Effectively they were on trial, and have now been convicted, because they had gone out on 26 February 2014 to support Ukraine’s territorial integrity, and Russian soldiers and armed paramilitaries had made that the losing side.

Akhtem Chiygoz was unexpectedly released into exile on 25 October 2017, following a deal which appears to have involved the exchange of him and Mejlis leader Ilmi Umerov for two Russian killers who had carried out a political killing in Turkey and been caught.  From then on, the separate ‘trial’ of the other Crimean Tatars was even more noticeably dragged out, and the verdict postponed three times.