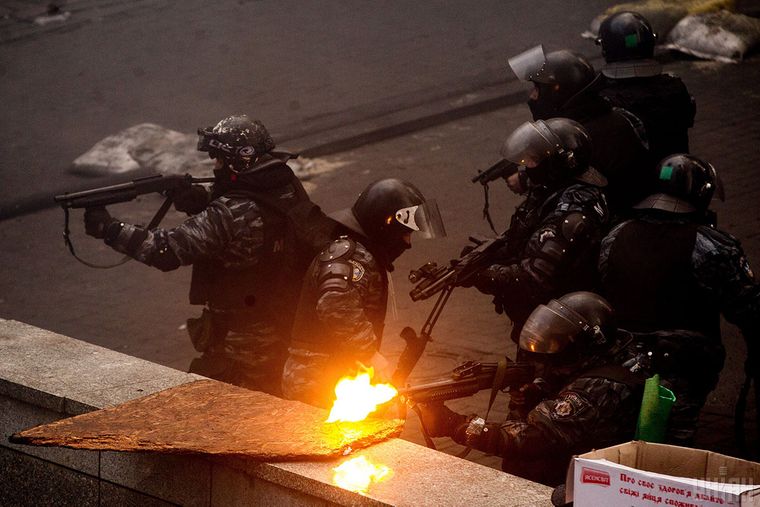 In releasing five suspect Maidan killers in the 29 December 2019, Ukraine’s leaders also gave Russia potent ammunition for its propaganda war against Ukraine.  The clear efforts to totally rewrite the facts about Euromaidan make it all the more imperative that the men’s trial is properly concluded, even if this is now in absentia. Although Ukraine’s President Volodymyr Zelensky has sworn that this will happen, the replacement of the prosecutors running the case from the outside by puppet prosecutors on 27 December give very real grounds for doubting the sincerity of such assurances. The families of the activists gunned down that day and their lawyers have issued an urgent appeal, stressing the danger to Ukraine’s most important trial if this is allowed to happen.

As reported, the Kyiv Court of Appeal on 28 December 2019 released from custody three former Berkut officers charged with the mass murder of 48 Maidan activists, and freed from house arrest two other defendants.  All five men (Serhiy Tamtur; Serhiy Zinchenko; Pavlo Abroskin; Oleh Yanishevsky and Oleksandr Marynchenko ) were handed over to the Russian-controlled Donbas ‘republics’ the following day.  The court’s ruling was issued at the end of a ‘hearing’ that lasted two days although the result was known in advance.

The men being allowed to escape justice is only part of the problem.  The Advocacy Advisory Panel points out that at the beginning of the appeal hearing, the entire prosecution team was removed.

“The prosecutors who had in proper manner and through all these years represented the prosecution in this case – Oleksiy Donsky; Ihor Zemskov; Yanis Simonov, [Denis Ivanov] and the others in the group who did not come to court, but also carried out important work in preparing for the court hearings, gathering evidence, etc. – were thrown off the case and replaced by puppet prosecutors”.

It is clear, they and the NGO representing the families of slain Maidan activists believe, that this was done because the real prosecutors opposed any change in the suspects’ restraint measures.  They were removed by Prosecutor General Ruslan Riaboshapka, and replaced by Serhiy Kutsy; Oleksandr Shevelenko and Denis Subotnin. These new prosecutors were brought in to support the political decision to release the men from custody, which they did, even though they acknowledged the risk that the men would abscond and, therefore, the fact that the detention ruling from 19 December had been justified.

It is these new prosecutors, who also have no experience of the case, who are now entrusted with carrying the trial through to a just conclusion.

The Advocacy Advisory Panel has now learned that interviews are due on 2 January which could result in Kutsy also being appointed head of the department within the Prosecutor General’s Office on Maidan cases.  The lawyers and NGO note that the selection commission includes representatives of the Prosecutor General’s Office, which is a clear conflict of interests.  They believe that this gives grounds for fearing that three of the ‘old’ prosecutors – Ivanov; Simonov and Zemskov – could be ‘punished’ (through non-appointment, disciplinary measures, etc.) for their refusal to go against their conscience and approve the suspected Maidan killers’ release.

This is not the only concern over the investigation of Maidan cases. Other interviews are also due on 2 January of investigators and prosecutors in Maidan cases who have expressed the wish to transfer from the Prosecutor General’s Office to the State Bureau of Investigations in connection with the law finally passed on 3 December to prevent Maidan investigations from collapsing.

Despite the clear provisions of that law, there is at least one candidate, Oleksiy Bekhovets, who has not been a Maidan prosecutor before and is not familiar with the cases.  The Advocacy Advisory Panel also notes that there appear to be other people on the list who only formally meet the requirements of the law, but who would not fulfil its main objective, namely to ensure continuity and efficiency of the Maidan investigations.   They ask the State Bureau of Investigations [SBI] to not allow the transfer of people who do not meet the requirements of the letter and the spirit of the law, and to publish the list of members of the commission who will be holding these interviews, as well as a list of the candidates and of the criteria for assessing their suitability.

The authors call on SBI to hold a meeting with Maidan victims and their lawyers to hear their views on the situation and the problems with the investigations into Maidan cases and that their position be taken into account with respect to the above-mentioned and other appointments linked with Maidan.

They ask that a new organizational structure for the State Bureau of Investigations be handed to the President for confirmation, with this including the creation of a department on Maidan cases, with a staff of 100.

People should not be appointed to managerial posts within the State Bureau of Investigations [SBI] who have a conflict of interests.  Although the appeal does not mention names, Maidan lawyer Yevhenia Zakrevska has reported that Oleksandr Babikov, who represented former President Viktor Yanukovych in his trial (in absentia) on charges of treason, has been appointed a Deputy Head of SBI.

Ukraine’s leaders were warned well before the exchange that Russia was insisting that Ukraine release Maidan suspects, the men convicted of the Kharkiv terrorist attack that killed a child and three adults, and similar, in order to divide and destabilize Ukraine.

Moscow clearly wanted the Maidan suspects freed for another reason as well, namely to intensify attempts at distorting the facts about Euromaidan and the gunning down of protesters on 18 and 20 February 2014.  State-controlled media, such as the TV channel Rossiya 24 and RIA Novosti have already taken interviews of some of the men.  These are entirely uncritical, with no inconvenient questions asked, meaning that the suspects’ claims about what happened on Maidan are likely to be believed by the audience.   In their alternative reality, Berkut officers only shot back ‘in self-defence’, and the shootings were some kind of “provocation by the opposition”.  They themselves have consistently denied having taken part in any shooting, and in one of the interviews it was claimed that the fact that the trial was taking so long was proof that there was no evidence against them.

All of the above is in conflict with vast amounts of video footage, witness testimony and material evidence (ballistic reports, etc.).  The trial was taking so long because of the enormous number of victims who needed to be questioned, and the scrupulous efforts by the prosecutors from the now dissolved Special Investigations Department to ensure that the case would stand up at all court levels, including international, not for want of evidence.

If the trial is now allowed to become an empty formality, and other investigations left to quietly die, there is a real danger that this will be used by Russia, together with certain individuals in Ukraine, like former Yanukovych aide Andriy Portnov, to actively push their own, ‘alternative’ narrative about what happened on Maidan.