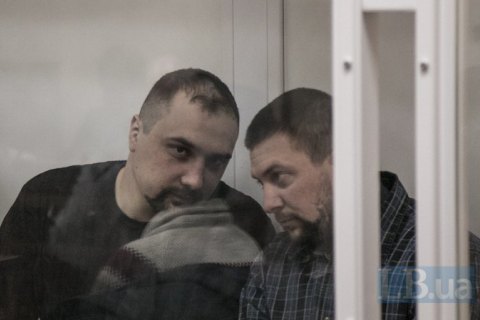 Two of the five former Berkut officers suspected of mass shootings on 20 February 2014 have apparently returned to Kyiv, after being released as part of the 29 December 2019 exchange of prisoners. Neither Oleksandr Marynchenko, nor Serhiy Tamtur, have actually been seen, however lawyer Oleksandr Horoshynsky announced their return on 8 February, posting an appeal from them to Ukrainian President Volodymyr Zelensky.  The picture this appeal paints of their alleged ‘persecution’ and of the Euromaidan protests, has elicited outrage from the families of slain activists.

Tamtur and Marynchenko, both Berkut special force officers, were the first of the Berkut officers to be arrested on suspicion of involvement in the gunning down of activists on 20 February 2014.  The arrests followed later of Pavlo Abroskin; Serhiy Zinchenko; and Oleh Yanishevsky, as well as the commander of their unit, Dmytro Sadovnyk.  The latter was released “under house arrest” in September 2014 and managed, suspiciously easily, to flee justice.

All the former Berkut officers are charged with the killing of 48 activists on Instytutska St.  They all admit to having been in that part of the street on 20 February 2014, but deny shooting people. This was a critical trial and effectively the only one over the gunning down of unarmed protesters.  It was expected to end in 2020.

Then came the events of December 2019 and the insistence of the Russian-controlled Donbas militants that the five men be included in the exchange list.  Zelensky has since acknowledged that this was a political decision which he stands by. The acknowledgement was, unfortunately, belated, and followed two days in which the families of victims were put through a farcical appeal court hearing, with both Ukrainians and the world community shown how a court ruling could be commissioned from above.

All five men were handed over on 29 December, with one of the men graphically demonstrating his contempt for Ukrainian journalists and two of the men (Abroskin and Zinchenko) immediately used on Russian propaganda programs to push an alternative reality view of Euromaidan, or the Revolution of Dignity.  That view clashes badly with the many hours of video footage, including from international press correspondents.

Marynchenko and Tamtur have now produced an appeal to President Zelensky; Prosecutor General Riaboshapka and the Speaker of Parliament,  Dmytro Razumkov, which essentially repeats the same ‘alternative narrative’.   They assert that they were held in custody for a crime that they didn’t commit and used by Ukraine’s leaders to report to a part of the Ukrainian public that somebody was being prosecuted for the shootings on Maida.  They claim that this allowed politicians to conceal “the real organizers of the killings of law enforcement officers and protesters”.

They say that they could not refuse to take part in the exchange as that would have put the entire operation at risk, but that they have returned to prove their innocence.

There are what appear to be outright lies in the text. Tamtur was not released under house arrest because the judge said that the prosecutor had not proven the grounds for accusing him of murder.  Judge Serhiy Dyachuk said only that a more lenient preventive measures, in the form of 24-hour house arrest seemed appropriate.

The former Berkut officers claim that the exchange helped to draw attention to the need for what they call an “objective assessment” of the events.  They claim there was a “state coup” and that a part of the protesters were “armed criminals” who threw stones and Molotov cocktails at the enforcement officers, “tortured” and “shot them with firearms”

While 10 Berkut officers were indeed killed during the two bloodiest days (18 and 20 February, 2014), well over 100 unarmed protesters were killed, with the majority gunned down.

According to Pavlo Dykan*, one of the lawyers representing the victims, there is precedent for separating out the trial of Tamtur and Marynchenko and continuing with it.  The others would then be declared on the wanted list, and their case made into separate proceedings.  Dykan even suggested that this could be a clever ploy so that three of the men effectively escaped.  That, however, would beg the issue of why two men were prepared to return.  Although one of the claims made has been that the trial continued for so long because the prosecution had no evidence, this is almost certainly not the case.  Indeed, had the Berkut officers had evidence to prove their innocence, they had had well over five years to present it.

How events develop in connection with the return of the two Berkut suspects remains unclear, but it was certainly looking as though this trial could collapse altogether. Although both Zelensky and Riaboshapka insisted that the trial would continue in absentia, this was clearly in question.  During the first hearing into the trial after the men’s release, their lawyers said that they had not heard from their clients.  One of the lawyers pointed to Article 323 of Ukraine’s Criminal Procedure Code which states that a court hearing cannot begin if the accused do not appear.

During that same hearing, judge Dyachuk announced a break in proceedings until March, while the suspects’ whereabouts were ascertained and they were informed of proceedings.  There is nothing automatic about switching to trial in absentia.  According to Olena Storozhuk, one of the victims’ lawyers, Ukrainian legislation demands that for this to happen, the defendants must first be placed on the international wanted list, via Interpol.  That could prove problematical as the men were released on the instructions of Ukraine’s Prosecutor General and did not flee, but were positively assisted in leaving government-controlled territory.  Article 335 of Ukraine’s Criminal Procedure Code makes it obligatory to terminate criminal proceedings after defendants have been declared on the wanted list.  Since 2017, there has been a law on trial in absentia, but it is by no means guaranteed that the same trial, which was coming to an end, can now be continued in the case of the three suspects who have not returned.