Russian-controlled ‘Donetsk republic’ claims more Ukrainian territoryMajority of Ukrainians against ‘special status’ for occupied DonbasDonbas residents beg Zelensky not to withdraw Ukrainian forces while Russia claims it’s not their warZelensky urged to clarify his ‘red lines’ on Steinmeier format, Donbas and RussiaUkraine’s agreement to Steinmeier Formula – Russian victory or same stalemate?After destroying Mariupol, Russia offers its victims money but only if they agree to blame Ukraine Mariupol Moses: A Man Who Took 117 People Out Of The Besieged City On FootRussia deports Ukrainians to occupied Donbas, forcing them to fight its war against Ukraine Russia sends relatives of Ukrainian soldiers and other Mariupol residents to ‘concentration camp’ in occupied DonbasHorrific conditions and torture in Russian filtration camp ‘ghetto’ for Mariupol residents ‘Mariupol will still be Ukrainian’ – wife of the militaryRussia is forcibly ‘mobilizing’ Ukrainians from occupied territory to fight its war against Ukraine ‘I washed and buried my brother riddled with shrapnel, and his bloodied and wounded mother was barely in time for the burial…’Fake ‘referendums’ at gunpoint planned to try to ‘legitimize’ Russia"s invasion of Ukraine Russia plans total ‘filtration’ of Mariupol men and forced ‘mobilization’Russia destroys Mariupol and tries to get illegally deported residents to move to Siberia Russia accused of using mobile crematoria to hide its war crimes in Mariupol Russian invaders seize Ukrainian journalist, take her to occupied Donetsk ‘for trial’ Russia continues bombing Mariupol while producing propaganda videos about its ‘humanitarian aid’Russia has already greatly surpassed the Nazi Third Reich by insidiously launching missile and bomb attacks on Ukraine
• Topics / Terrorism 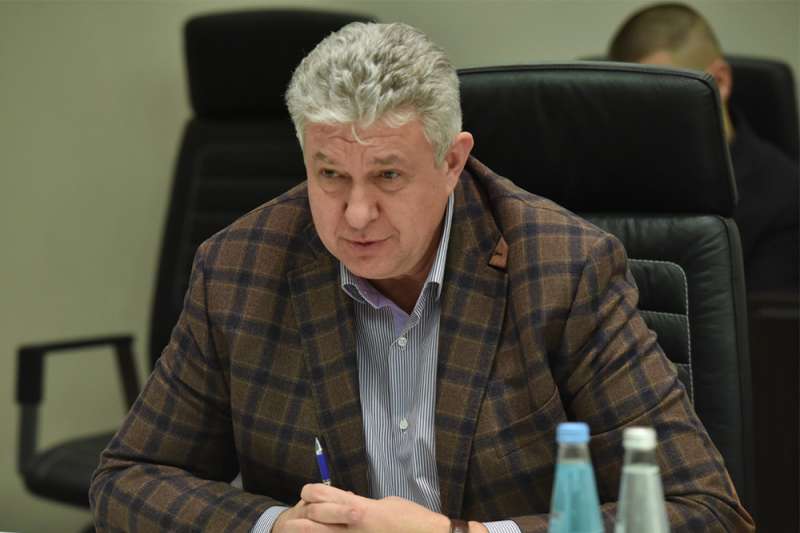 Vladimir Pashkov, who left a top Russian regional government post three weeks before Russia’s invasion of Crimea, has now been made ‘acting prime minister’ of the self-proclaimed ‘Donetsk people’s republic’ []DPR’]. Russian President Vladimir Putin’s press secretary has denied that this gels badly with Moscow’s claim to have no part in the conflict in Ukraine.  According to his version, Pashkov is merely an individual who just happens to be Russian, like the three former or current Russian FSB and military intelligence officers whose trial in absentia over the downing of MH17 is shortly to begin in the Netherlands.

Information from the Russian-controlled Donbas ‘republics’ emerges rather like developments within the Politburo in Soviet times.  On 5 February, a report was posted on the site of Denis Pushilin, one of the few militants to have retained a leading post in ‘DPR’ to this day.  The report promised a new, “fierce” fight against corruption, called Pashkov “acting prime minister” and said absolutely nothing about Oleksandr Ananchenko, the individual who had until then been called ‘prime minister’. It appears that Pashkov had been Ananchenko’s deputy.

Ananchenko had been officially dubbed ‘prime minister’ since October 2018.  According to News of Donbas, he was earlier an adviser to the head of Vneshtorgoservis, a company linked with Serhiy Kurchenko. The latter gained most of his millions during the presidency of Viktor Yanukovych and also fled Ukraine in February 2014.

According to the (generally pro-Russian) Strana.ua, Pashkov founded a number of companies after resigning from his post as Deputy Governor of the Irkutsk oblast from 5 February 2014.  In May 2017, the Russian newspaper Kommersant reported that from the beginning of April that year, the management of Ukrainian factories in occupied Donbas had been taken over by Vneshtorgservis, which is registered in yet another proxy Russian ‘republic’ in South Ossetia.  The company and, accordingly, the biggest factories in Donbas were now under Pashkov’s control.

This rather strange, though officially ‘voluntary’ career move for a Deputy Governor  was announced a month before Russian soldiers without insignia seized control of government buildings in Crimea and Russia annexed the peninsula.  There is no information as to whether Pashkov, who had earlier served in the Navy for 12 years, spent any time in 2014 in Crimea, but he would certainly not be the first newly made ‘private individual’ Russian national to have helped Moscow first seize control of Crimea, and then of Donbas.  One such individual was Igor Girkin (Strelkov), who also officially left his post in Russia’s FSB (according to some reports, military intelligence, or GUR) a matter of months before playing an active role first in the seizure of Crimea, and then of Donbas.  Girkin is one of the three Russians so far facing charges over the downing by a Russian BUK missile of Malaysian airliner MH17 on 17 July 2014.

Ukraine’s SBU [Security Service] announced in February 2017 that they had uncovered the mechanism by which the Russian government was financing ‘LPR’ / ‘DPR’.  It noted that the so-called ‘LPR budget’ for the first quarter of 2017 envisaged receiving over 11 billion roubles, with the militants themselves only capable of gathering two billion.  SBU asserted that the rest of the money was coming from the Russian government, but that the real source was being hidden behind a supposed charitable “Foundation for the support of humanitarian projects”, headed by, yes indeed, Vladimir Igorevich Pashkov.

As mentioned, Putin’s Press Secretary Dmitry Peskov was asked on 6 February how Paskhkov’s appointment correlates with the statements from the Kremlin denying that Russia is involved in the conflict in Ukraine.  No problem at all, Peskov claimed, going on to again deny Russia’s involvement and to say that Pashkov was not officially delegated, and merely “a citizen of the Russian Federation.”

There have been very many such “citizens of the Russian Federation”, either openly holding key posts in the proxy ‘republics’ or fighting against Ukrainian soldiers.  Moscow invariably claims that the latter are there as ‘volunteers’, although some of these fighters have admitted to being there for money and others are known to have been military servicemen.  These included most of a Pskov unit of paratroopers who were killed in Donbas in August 2014.

The Kremlin will doubtless continue to repeat its standard denials, however empty the latter have become. The lies are likely to be exposed during the trial beginning on 9 March 2020 of the first four MH17 suspects: Igor Girkin, “former FSB colonel”; Sergey Dubinsky, who may well be a current GUR officer; Oleg Pulatov, former Russian GUR spetsnaz; and Ukrainian Leonid Kharchenko.

In November 2019, the Dutch Prosecutor gave an indication of just how much evidence they have amassed, with a number of intercepted conversations very directly contradicting Russia’s claim to have nothing to do with the militants and the fighting in Donbas.

In one of the incepted calls from 3 July 2014, Russian ‘DPR leader’ Alexander Borodai can be heard stating that he is “carrying out orders and protecting the interests of the one and only state, the Russian Federation’.

The evidence which the Joint Investigative Team [JIT] published on 14 November made it very clear that the investigators were also receiving testimony from witnesses, including those involved in the fighting. The report stated that the testimony and other information has revealed “that Russian influence on the DPR went beyond military support and that the ties between Russian officials and DPR-leaders appear closer”.  The investigators began their report by inviting testimony from any witnesses “who are able to testify about these command lines and the role that Russian government officials might have had.”  There were also intercepted telephone calls demonstrating contact between ‘DPR’ leaders and Russian government officials, including Vladislav Surkov, Putin advisor and the Russian Defence Minister, Sergei Shoygu.

In an intercepted call on 1 July 2014, between a ‘DPR’ member and a fighter ‘Mongol’, the DPR member says:  “We’re moving towards unity of command. What happens next is a bunch of men with a mandate from Shoygu will arrive and kick the local warlords the fuck out of the units -  … and then people from Moscow will take charge.(…)
JIT has been told by several former DPR fighters that “the Russian security service FSB and the military intelligence service GRU were involved in the daily management of the DPR. One of the witnesses stated that DPR leaders regularly went to Moscow to consult with their contacts at the FSB and GRU.”

It notes that “intercepted phone calls also seem to show the involvement of Russian security services, working side by side in directing the DPR.”

The timing of Pashkov’s departure from his previous post and his activities in ‘DPR’ make it equally difficult to view him as yet another chance individual who just happens to have a Russian passport.