10 months of torture in Donetsk secret prison for supporting UkrainePrisoner exchange leaves most Donbas hostages in captivity and makes journalists suspiciousDesperate plea to Zelensky from relatives of hostages once again forgottenRussian-controlled Donbas militants finally free severely disabled pensioner but not her invalid sonDonbas militants ‘allowed to torture 500 innocent Ukrainians to death, to find one spy’Silence abets Russia in torturing and risking the lives of Ukrainian hostages and POWs in occupied DonbasRussia kills Minsk Agreement, with lives of over 300 Ukrainian hostages and POWs in danger Fears for the life of tortured Ukrainian hostage held by Russian-controlled Donbas militants Nine former hostages to testify against ex-militant over torture at Donetsk Izolyatsia secret prisonUkrainians tortured and imprisoned in Donbas for supporting Ukraine, with Russia blocking their release Four years of torture and hell for pro-Ukrainian views in Russian proxy Donbas ‘republic’ Russian-controlled Donbas militants torture and imprison Donetsk lecturer for ‘spying for Ukraine’Tortured and jailed or killed for the Ukrainian Flag and for supporting Ukraine in occupied DonbasRussia’s ‘all for all’ exchange: those who were not returned to UkraineRussian-controlled Donbas militants torture Valery Matiushenko, tell his wife she’ll be next“Our brothers are dying in the East”, yet environmental protection efforts must continue
• Topics / The right to liberty and security 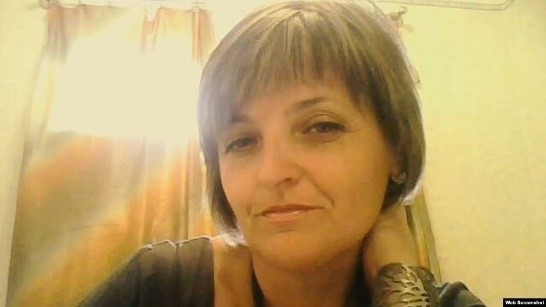 Olena Fedoruk was seized by militants from the self-proclaimed ‘Donetsk people’s republic’ [DPR] in July 2017 after returning from a visit to government-controlled Ukraine, where both her daughters live.  Fedoruk is from Kalmiuske, a city in Donetsk oblast whose proximity to the Russian border made it a convenient location for the Russian military whose involvement in the war in Donbas Russia is continuing to deny.  For this reason, the city became ‘closed’, which is, in one way or another, the likely reason for Fedoruk’s nearly three years of captivity.

Fedoruk has pro-Ukrainian views and certainly never supported the Russian and pro-Russian militants, however she refused to leave with her daughters after Kalmiuske was seized by the militants, as she needed to care for her bedridden mother.  She had run her own flower shop, but when that became impossible, she was forced to take up work at the militants’ headquarters.  She was responsible for making inventories, for example, of chairs, tables and beds which were taken to local fighters and Russian military.

Tetyana Matyushenko, whose husband Valery Matyushenko has also been imprisoned by the militants since 2017, is convinced that much of the shelling that they experienced came from across the border with Russia.  She recalls that it was after the battle of  Ilovaisk (at the end of August 2014), that the Russian military entered the city bringing a huge amount of technology, and Kalmiuske became a closed city.  Only people with local registration were allowed into the city, and everybody was under close surveillance from the so-called ‘DPR ministry of state security’ [DPR MGB].  The population was terrified, especially after the arrests in 2017 of Valery Matyushenko, Fedoruk, her friend Petro Sandulov, and at least one other person, probably Serhiy Dubrovin.

According to Yulia Savko, her mother was seized shortly after she returned from a visit to them with Sandulov. He was ‘arrested’ almost immediately on his return, and Fedoruk two weeks later, on 25 July 2017.

Two years later, on 16 August 2019, a ‘DPR court’ sentenced Fedoruk to 11 years’ imprisonment.  She and Sandulov had both been charged with ‘spying’ for Ukraine.

She was taken from the Donetsk SIZO [remand prison] to a women’s prison in Snizhne.  The only information she was then able to pass on to her daughter was that she had not been tortured or raped.  This, admittedly, was because she had immediately understood what to expect and had agreed to sign all the documents they put in front of her.   Sandulov obviously denied the charges, and lodged an appeal.  Radio Svoboda suggests that this ongoing appeal could be the reason why the militants are not including Fedoruk on the exchange list, although it must be said that they are also refusing to release Matyushenko.

Virtually all of the information that Fedoruk’s daughters have received has been from former hostages after their release.  It is clear that the women imprisoned at Snizhne are forced to work at a sewing factory where, for the whole day, you’re allowed to take only as much food as fits into a mustard jar.  If you refuse, you get sent to the kitchen.  Since one of the former hostages recalls that Fedoruk was responsible for feeding 70 women, there must have been such refusals.  Savko mentions, however, that since the work is hard wherever, she accepts it for the sake of the 100 roubles a month which is an insultingly small amount, but is allowed to be spent on phone calls to her mother.  Fedoruk’s daughters believe that those calls are a lifeline for their grandmother who, they fear, may not live to see her daughter again.