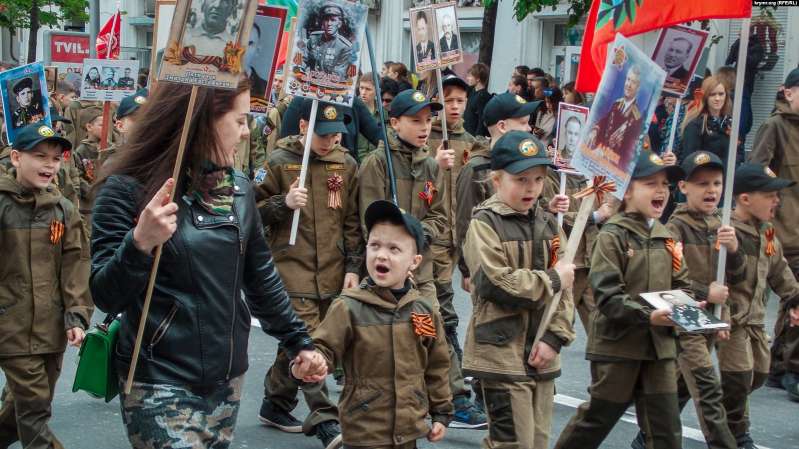 Russia’s State Duma has adopted a bill which will make inculcation of ‘Russian patriotism’ and ‘civic consciousness’ part of the school curriculum in both Russia and occupied Crimea.   Russia has long used various methods to force Crimean children to forget that they are Ukrainian, but these formal changes to school education will inevitably increase the already worrying level of pro-Russian propaganda and militarization of childhood on occupied Ukrainian territory.

The draft bill was tabled by Russian President Vladimir Putin back in May, before the so-called ‘referendum’ aimed at rubberstamping amendments to Russia’s Constitution.  Although the main aims of the changes to the Constitution were doubtless to enable Putin to remain in power for at least another 10 years and to try to prevent any questioning of Russia’s occupation of Crimea, the bill essentially echoed the planned inclusion of ‘patriotic education’ in the Constitution.  This now says that the state must create the conditions for developing in children “patriotism and civic consciousness, as well as respect for the memory of defenders of the Fatherland and the older generation”.

The bill adopted in its third and final reading on 22 July, and approved by Russia’s ‘Council of the Federation’ [upper house] two days later, proposes that programs on developing patriotism, etc. will become part of the curriculum and therefore part of a school plan for the year.  The bill speaks of “activities aimed at development of the individual, creation of the conditions for self-identification and socialization of the students on the basis of socio-cultural, spiritual and moral values and rules and norms of behaviour accepted in Russian society”.  It also proposes “to form in the students the sense of patriotism, civic consciousness, respect to the memory of the defenders of the Fatherland and achievements of the Heroes of the Fatherland; to the law and public order; to men who work and to the older generation” and others.

There are no details as to how such work is to be organized, but the inclusion of the above will almost certainly have an impact on textbooks and manuals instructing teachers on what to teach and how.  While it may sound innocuous to encourage children to honour those who defended their country, this is far from uncontroversial even for Russia itself.  Under Putin, there has been a significant shift towards whitewashing the Soviet past and glorifying the Second World War (once again referred to as the Great Patriotic War).  This has been accompanied by a dangerous rewriting of history with respect to bloody dictator Joseph Stalin whom a terrifyingly large percentage of Russians now view in a positive light.  It is essentially impossible to question, for example, the sense of the Blockade of Leningrad, or to openly speak of Stalin’s carving up of (what was then) Poland with Adolf Hitler and Soviet-Nazi collaboration until 22 June 1941.  This has resulted in grotesque absurdities such as the prosecution of Vladimir Luzgin, upheld by the Russian Supreme Court, for reposting a text rightly stating that the Soviet Union invaded Poland in 1939.  Russia is currently attempting to entirely rewrite history and blame Poland (this is not a typo) for WWII.  Such distortion is also extending to honesty about war crimes during the Second World War, such as the Katyń Massacre (of 22 thousand Polish officers and others) and Stalin’s Deportation of the entire Crimean Tatar people from their homeland.   The War and a highly selective and misleading representation of Stalin’s role in it are also used as one of the excuses for rewriting the history of the Soviet Terror (as well as for persecuting its historians, such as Yuri Dmitriev and Sergei Koltyrin).

The situation is grave for other reasons as well in occupied Crimea, where all such educational measures, propaganda and militarization of childhood are in violation of international law.

Iryna Sedova, from the Crimean Human Rights Group, fears that one result of this new law may be that any current ‘voluntary’ status of Russia’s notorious ‘Yunarmia’ or ‘Youth Army’ may be forgotten, with the ‘army’ becoming a part of the school program.

As reported, Yunarmia, which ‘recruits’ children as young as eight, began as a militaristic wing of the ‘Russian Movement of School Students’, which was created by presidential decree on October 2015. That ‘movement’ was, Putin said, intended “to enhance state policy on bringing up the growing generation and facilitate their personal development on the basis of the system of values inherent to Russian society”.  Yunarmia was initiated by the Russian Defence Ministry and supposed to be “responsible for issues linked with the military-patriotic upbringing of young people”.  The Defence Ministry has openly spoken of wanting a million members of this children and young people’s ‘army’ by 2020, and there have long been doubts as to whether all enrolments are actually voluntary.

The Crimean Human Rights Group has long been monitoring Russia’s illegal conscription in occupied Crimea and militarization.  This involves glorifying war and military service, encouraging children to want to become soldiers of work for the FSB [Russian security service].   Olha Skrypnyk, head of CHRG, stresses that the supposed ‘educational measures’ seen in Crimea over the last six years have nothing to do with the right to education.  They have considerable proof that such measures are, in fact, based on orders from the Russian defence ministry.  This is almost certainly true also in Russia, however an additional aim in occupied Crimea is clearly to brainwash children into accepting Russia’s distorted presentation of history and of the events around annexation.  Vast amounts of money have been expended on inculcating ‘Russian identity’ and trying to get children to forget their Ukrainian identity.