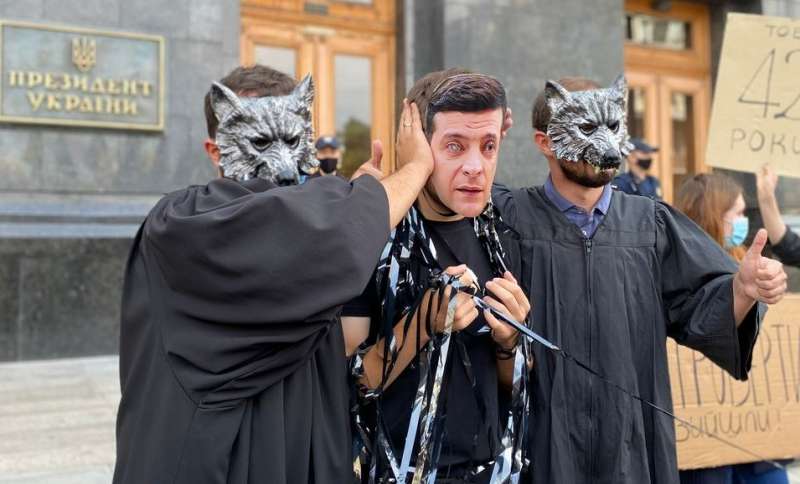 A petition calling on President Volodymyr Zelensky to help dissolve the notorious District Administrative Court in Kyiv (OACK) has already gained well over 10 thousand signatures, with the numbers in recent days rising rapidly.  The President is the only person able to table a draft bill to dissolve a court which has lost any credibility following judicial corruption scandals and an endless stream of highly dubious rulings.

The petition was initiated by journalist Danylo Mokryk on 30 July this year, following the publication by the National Anti-Corruption Bureau [NABU] of yet more compromising conversations held in the office of the head of the court, Pavlo Vovk.  The signatories ask the President to submit a draft bill on dissolving the court  “in view of the total loss of authority by the District Administrative Court in Kyiv, partly as a result of the publication by NABU in July 2019 and July 2020 of conversations within the management regarding the court, which point to deeply entrenched corruption and issuance of wrongful rulings”

In inviting people to sign the petition, Mokryk wrote that each day that OACK continues its existence, is another day in which a mockery is made of the justice system in Ukraine.  The petition should force the President to finally take the stand that he should have taken when the first tapes were made public in July 2019.  Although in accordance with the law, it is only the President who can initiate dissolution of this court, Zelensky has tried to distance himself from the scandal and to claim that he has no influence over the situation.

It should be noted that the first taped conversations back in July 2019 were already shocking enough to have warranted swift reaction.  Even before further conversations were revealed, civic activists were demanding that Zelensky move towards dissolving the court.  On 18 June, 2020, for example, activists from the Anti-Corruption Action Centre (AntAC) and Automaidan held a simulated ‘school lesson’ outside the Office of the President to explain just what is wrong with OACK.  The staging of a ‘lesson’ was, of course, a pointed reminder to a key factor in Zelensky’s 2019 presidential win, namely the 2015 TV series ‘Servant of the People’, where Zelensky played a history teacher who won the presidential elections after a videoed tirade against government corruption went viral.  Vitaly Shabunin, Head of AntAC, suggested that the people who brought Zelensky to power are beginning to regret their choice.  Zelensky should, they said, dissolve a court which, through its corruption, is effectively governing the country.

This proved eerily close to the charges announced by NABU on 17 July 2020.  Pavlo Vovk, his deputy Yevhen Ablov; Ihor Pohribnichenko, Ihor Kachur, Bohdan Sanin, Oleksiy Ohurtsov and Volodymyr Keleberda, as well as Zenoviy Kholodniuk, the head of the State Judicial Administration, were accused of involvement in a criminal organization aimed at seizing state power by establishing control over the High Qualification Commission of Judges and the High Council of Justice, and by creating artificial obstructions to their work.  NABU asserts that they passed wrongful court rulings to serve their own interests or those of politicians or business structures, and that they used the possibility of such rulings as a means of political pressure.  One favoured method was (and, unfortunately, is) to use law suits from dummy claimants to block or halt proceedings or developments that were not in their interests.

Just as a year earlier, NABU made public such recordings, allegedly of conversations involving the suspects. The conversations, mostly in Russian, use choice language and demonstrate a staggering level of cynicism.  At one point, for example, Vovk asks if anyone doubted their “political prostitution” while elsewhere he effectively boasts that their court has survived untouched by all the reforms.

NABU asserts that the judges used various unlawful means of ensuring that no ‘inconvenient’ members should be appointed to HCJ.   They accuse Vovk of exerting influence on other courts as well, with one of the tapes, from 29 May 2019 of particular importance.  On it a voice that appears to be Vovk’s can be hearing boasting that “two courts belong to us, the Constitutional Court and the District Administrative Court.”  The person who is seemingly Vovk hints that his influence was behind the notorious judgement by the Constitutional Court on 28 February 2019 that found the article of Ukraine’s Criminal Code imposing liability for illegal enrichment to be unconstitutional.

Around three weeks after these shocking revelations, Serhiy Horbatyuk, former Head of the Special Investigations Department investigating crimes against Maidan activists, wrote: “You would think that the reaction of all responsible heads of the state and of state bodies would be unanimous, swift and blunt; the investigation and court examination timely and the reaction of the High Council of Justice immediate and proactive. And, as a result, that those guilty would be punished, including as a lesson to others.

But no.  Ukraine’s President is silent, so too are most MPs.  The bodies of judicial self-government are silent and, what is most important, there is silence from those bodies which are obliged to react – from the High Council of Justice and the Prosecutor General.”

While Zelensky has remained silent, the High Council of Justice has, in fact, been quite proactive – in twice blocking the suspension from their duties of Vovk & Co.  This is in contrast to the High Anti-Corruption Court which, on 1 October 2020, suspended Kholodnyuk from his post as head of the State Judicial Administration, and despite the fact that all of the men, although especially Vovk, are facing the gravest of charges.