Russian-controlled militants sentence 70-year-old pensioner to 17 years for ‘spying’ after torturing him and his familyUkrainian hostage tortured at Donetsk secret prison urgently needs an operationDonbas militants threaten to kill Ukrainian hostage’s children if he doesn’t ‘confess’Ukrainian researcher savagely tortured for ‘confession to treason’ against Russian proxy ‘Donetsk republic’Four Russian invaders sentenced to 11 years for torturing hostages in Kharkiv oblast Kherson journalist, imprisoned by the Russians, tells of killing, rape and torture of hostages Former child hostage spends 7th birthday in Russian captivity for wanting to live in free Ukraine Russia uses Kherson ‘evacuation’ for enforced disappearance of more Ukrainian hostages and POWs ‘Guilty’ of being Ukrainian: Teacher abducted by the Russian invaders and held incommunicado for six months Silence abets Russia in torturing and risking the lives of Ukrainian hostages and POWs in occupied DonbasAbducted 16-year-old was forced to clean up after Russian invaders" torture of Ukrainian POWs and hostagesRussia abducts 25 volunteers delivering humanitarian aid to Mariupol, threatens to put them ‘on trial’ Russia extends terror and abductions from occupied Crimea and Donbas to all of Ukraine Russian invaders torture and threaten to kill civilian hostage in revenge for their military losses Ukrainian POWs and abducted civilian hostages illegally imprisoned in Russian-occupied Crimea Russian invaders abduct Mayor of Prymorsk Oleksandr Koshelevych after first taking his elderly father hostage Russian Rule of Lawlessness in Occupied Crimea and DonbasRussian invaders take Mariupol intensive care hospital and its patients hostage Russia kills Minsk Agreement, with lives of over 300 Ukrainian hostages and POWs in danger Russia is already holding many Ukrainian POWs without any declaration of war
• Topics / The right to liberty and security 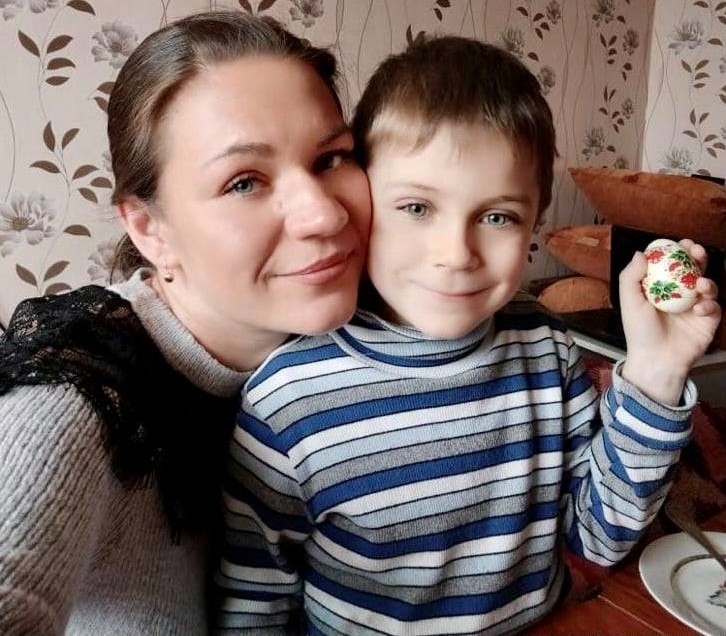 Oksana Parshyna’s 6-year-old son Maksym has not seen his mother for almost two months and does not understand why she isn’t answering the video messages he sends her.  His mother, who is now in her fifth month, has been held prisoner in the self-proclaimed and Russian-controlled ‘Donetsk people’s republic ‘ [DPR] since 14 May 2021, with the militants now accusing her of ‘spying for Ukraine’.

The first scant news of Parshyna’s seizure by the militants came in June, after she had been held by the militants for 20 days.  Monika Andruszewska, a Kyiv-based Polish journalist, has been following the situation closely and writes that while Oksana was still held in so-called ‘administrative arrest’, without any charges laid, there had seemed some hope that the militants would not continue imprisoning a pregnant woman.  There is no longer any hope, and the charges of ‘spying’ almost certainly mean that she will be ‘sentenced’ by a DPR ‘court’ to 12 years or more.  Oksana’s pregnancy may possibly have stopped the militants from using the customary arsenal of torture methods used to extract ‘confessions’, but they will certainly have used other forms of pressure to admit to charges, however surreal.

Oksana Parshyna (in Polish Parszyna) is from Donetsk, but of Polish descent, and both she and her son hold ‘karty Polaka’ [cards, confirming their Polish roots].   Although Parshyna probably wanted to visit her sister and other relatives who have remained in Donetsk, it seems she was also planning to change the papers for her home into her sister’s name, in an attempt to prevent the militants from simply seizing it.  The house itself was destroyed during the battle for Donetsk Airport, but the land, and any structure that remains, are probably the only property she has. It is desperately hard for people like Oksana, forced to flee their homes, and doubtless the fear of losing everything prompted her to take the fatal decision to travel to Donetsk.  Since the pandemic has made it near impossible to cross between government-controlled Ukraine and ‘DPR’, she decided to travel to occupied Donbas from  Russia (probably the Rostov oblast).

She was first taken off the coach by DPR militants who claimed that they would merely check her documents and let her take the next coach.  That was on 14 May.  She vanished for 24 hours and then the militants arrived and carried out a search of her mother’s apartment in Donetsk, taking both an old, unused computer and religious literature away.

Oksana also suffers from a hernia, and her health is clearly in critical danger as is the life of her unborn baby.  It is Russia that decides when exchanges of prisoners will take place, and pressure on Moscow is urgently needed.

The militants in the so-called Donetsk and Luhansk ‘republics’ are holding at least 250 Ukrainians hostage, with a number of people in poor health having faced torture at the notorious ‘Izolyatsia’ secret prison before being sentenced for ‘spying’.   Please help ensure that they are not forgotten and that pressure is brought to bear on Moscow.