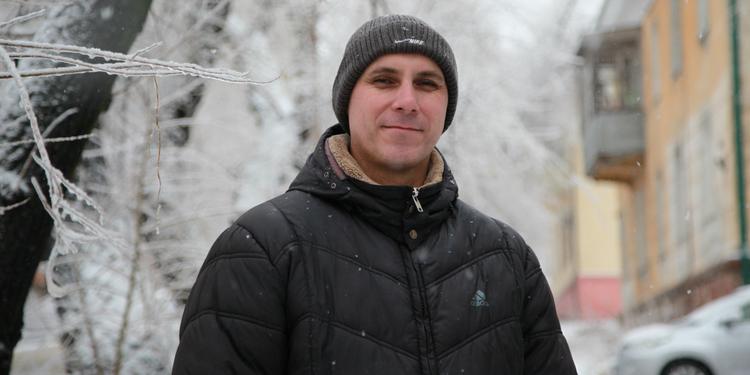 It is five years since Russia’s Supreme Court outlawed the Jehovah’s Witnesses, claiming that this world faith is ‘extremist’.  As well as persecuting a huge number of believers at home, Russia has also passed long sentences against four Ukrainian Jehovah’s Witnesses from occupied Crimea and has just begun the ‘trials’ of a further seven people.  All are accused of organizing and / or financing so-called ‘extremist activities’, with this otherwise known as reading and studying the Bible and sharing their faith with others.

On 9 April 2022, a Russian court revoked the first and only acquittal in all of these five years of a Ukrainian Jehovah’s Witness and sent his ‘case’ back for retrial.   Dmitry (or in Ukrainian, Dmytro) Barmakin is from Alushta in Crimea, however he and his wife, Yelena moved to Vladivostok in the Far East of Russia to care for Yelena’s sick mother.  He was arrested, after an armed search of his home, in July 2018 and remanded in custody for well over a year.  The charge was the more serious ‘‘organizing the activities of an extremist organization’ (under Article 282.2 § 1 of Russia’s criminal code), however the case was sent back to the prosecutor once because of the vague nature of the indictment.   On 22 November 2021, Barmakin was acquitted by judge Stanislav Salnikov from the Pervorechenskiy District Court in Vladivostok.

This was one of very few acquittals of Jehovah’s Witnesses, and the only one involving a believer with Ukrainian citizenship.  On 8 April, the Prymorye Regional Court, under presiding 'judge' Tetiana Myshkina, overturned the ruling in Barmakin’s case and ordered a retrial.

It was also learned in early April that two ‘trials’ have begun in occupied Crimea of Jehovah’s Witnesses.  On 4 April, ‘judge’ Vladimir Romanenko from the Russian occupation Yalta City Court began hearings into the charges against Taras Kuzio; his wife Darya Kuzio; Pyotr Zhiltsov; Serhiy Lyulin and Tadevos Manukian (the last of these in his absence).

Taras Kuzio (b. 1978) was first mentioned as facing charges after armed searches on 20 March 2019, however at that stage it was only Artem Gerasimov who ended up ‘on trial’ (and sentenced to 6.5 years’ imprisonment).  On 4 March 2021, ‘investigator’ V.A. Novikov initiated criminal proceedings against Kuzio under Article 282.3 § 1  (‘financing an extremist organization’), although he is now, seemingly, also charged with ‘organizing’ under Article 282.2 § 1   He has been under house arrest since March 2021.

On 29 July, Petro (or Pyotr) Zhiltsov (b. 1987) was also detained.  He had earlier been interrogated as a ‘witness’ in the case against Kuzio, however Novikov initiated identical charges (under Article 282.2 § 1), accusing Zhiltsov of both financing and of organizing the so-called ‘activities of an extremist organization’.  He too faces a sentence of up to 10 years for practising his faith.

As reported, Lyulin was seized by FSB officers while in Russia, thrown into the boot of a minivan and driven, in handcuffs and bound with scotch tape, for 16 hours to occupied Simferopol.  He was shortly afterwards remanded in custody, and spent 203 days in the notorious Simferopol SIZO [remand prison], being held for most of that time in a cell with renowned Crimean Tatar civic leader and journalist Nariman Dzhelyal. Since 1 March, he has been under house arrest.

On 2 August, charges were initiated of ‘organizing the activities of an extremist organization’ (under Article 282.2 § 1) against two men: Oleksandr Lytvyniuk (b. 1960) and Oleksandr Dubovenko (b. 1973).  The charges, which carry a sentence of up to 10 years’ imprisonment, are over a Zoom conference which Vitaly Vlasov, ‘the investigator’ implicated in the falsified charges and torture against Nariman Dzhelyal and Ukrainian journalist Vladislav Yesypenko, claims was to “attract new members of a banned organization’.

Their ‘trial’ began at the occupation Armyansk City Court on 5 April.

Judging by previous ‘trials’ there is every reason for concern that new long sentences could be passed. Four men are already serving sentences of six or more years for their faith.

Serhiy Filatov (b. 1972) was arrested during a ‘mass operation’ against believers in Dzhankoy from 15-16 2018.  Filatov’s ‘trial’ took place in the Russian-controlled Dzhankoy District Court, with the prosecution claiming that Filatov had “undermined the foundations of the constitutional order and the security of the state”, by being the leader of a religious organization.  On 5 March 2020, he was sentenced by ‘judge’ Maria Yermakova to six years’ imprisonment in a medium security prison colony.  That sentence against the 47-year-old father of four was then upheld by ‘judge’ Edward Belousov of the Crimean High Court on 26 May 2020.   Belousov is one of eight ‘judges’ and enforcement officers recently placed on the EU’s sanctions list.

Viktor Stashevsky (b. 1966) is a father of two from Sevastopol, and was also caring for his elderly mother.  He was sentenced by the ‘Gagarin District Court’ on 23 March 2021 to six and a half years’ imprisonment on the same ‘organizing extremist activities’ (Article 282.2 § 1 ) charge, and taken into custody in the courtroom. The ‘judge’ in the case was Pavel Kryllo who has been involved in at least one other politically-motivated sentence (against Ihor Movenko).  The sentence was upheld on 10 August 2021 by ‘judge’ Vladimir Avkhimov from the occupation ‘Sevastopol Municipal Court’.

Schmidt is one of four believers from Sevastopol who were arrested and remanded in custody after armed searches on 1 October 2020.  Yevhen Zhukov; Volodymyr Maladyka and Volodymyr Sakada are facing the same ‘organizing the activities of an extremist organization’ charge under Article 282.2 § 1, with their ‘trial’ now underway.

‘Prosecutor’ V.S. Yazev had demanded a 7-year sentence, and ‘judge’ Lyudmila Petrovna Tumaikina from the Gagarin District Court in occupied Sevastopol passed a sentence of six years on 22 October 2021 , with this upheld on 17 January 2022.

On 16 February 2022, Artem Shabliy (b. 1990) was found guilty of the lesser charge of so-called ‘participation in an extremist organization’ (under Article 282.2 § 2) and given a two-year suspended sentence.

Russia cannot alter the nature of its invasion of Ukraine by hiding behind terms like ‘special military operation’, and the use of terms like ‘extremism’ cannot change the fact that Russia is violating its own constitution, through its flagrant religious persecution of Jehovah’s Witnesses and others.  It is also in clear violation of international law through its application of repressive legislation to arrest and try believers in illegally occupied Crimea.