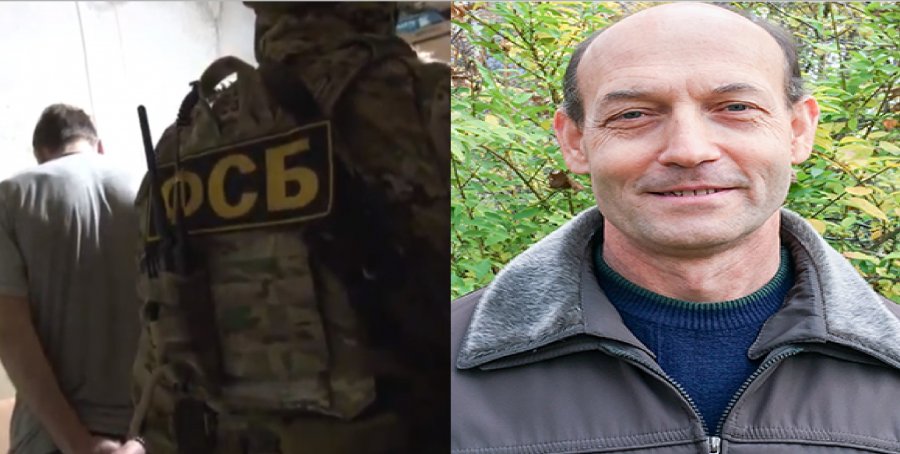 A Russian-controlled ‘court’ in occupied Crimea has upheld the appalling 6.5-year sentence passed on Viktor Stashevsky.  The news comes a week after the FSB in occupied Yalta  launched new criminal proceedings against two Jehovah’s Witnesses, including Darya Kuzio, whose husband, Taras Kuzio was arrested in March this year. The three, and many other believers, face imprisonment, essentially for praying and sharing their faith with others.

According to the Jehovah’s Witnesses in Russia website, 33-year-old Petro Zhiltsov was detained on 29 July 2021 in Yalta and held in custody until the following day when the Russian-controlled Yalta City Court placed him under house arrest.  Zhiltsov is charged under Articles 282.2 § 1 and 282.3 § 1 of Russia’s criminal code and accused of “committing deliberate grave crimes of an extremist nature, for which maximum punishment of imprisonment of up to 10 years is envisaged.”  Zhiltsov is claimed to have “organized the activities of an extremist organization’ (Article 282.2 § 1) and ‘financed an extremist organization’ (282.3 § 1)

Zhiltsov was earlier summoned as a witness in the trial of Taras Kuzio who was charged in March this year with ‘financing an extremist organization’.  It is not clear why Zhiltsov is also accused of being an ‘organizer’ with this making the likely sentence even higher.  It would, however, not be the first time that the FSB had revenged themselves on a person who refused to give false testimony against another political prisoner.

Darya Kuzio is charged, like her husband, with ‘financing an extremist organization (Article 282.3 § 1).  This alone can carry a sentence of up to 8 years’ imprisonment.  At least in her case, the charge was brought by V.A. Novikov, a senior investigator in an Investigative Committee department “for investigating particularly important cases”.  Unlike her husband, Darya Kuzio had only to sign an undertaking not to leave the city.

42-year-old Taras Kuzio was placed under house arrest following 11 armed searches of Jehovah’s Witnesses’ homes in occupied Yalta on 11 March 2021, ‘authorized’ by Kievsky District Court ‘judge’ Viktor Krapko.  He was also ordered to have no contact with others involved in the ‘case’ and was prohibited from using the Internet; sending or receiving mail.  The couple have two underage children whose parents are now facing criminal charges and very likely prison sentences for reading the Bible in groups, taking part in shared prayers, etc.

Since the shocking Supreme Court ruling from 20 April 2017, which outlawed the Jehovah’s Witnesses as a supposedly ‘extremist organization, a huge number of believers have faced armed searches, arrests and criminal prosecution in Russia and in occupied Crimea.  These are ‘easy’ cases for the FSB and Investigative Committee, since all that really needs to be proven is a person’s faith in order to guarantee a conviction and improve the relevant enforcement body’s ‘statistics on fighting extremism’.  In Russia, however, there is a noticeable divergence in the sentences passed, with some believers sentenced to long terms of imprisonment, while others get suspended sentences or fines.

In occupied Crimea, where the level of repression is even worse than in Russia, three people have so far been convicted, with all of them receiving long sentences.

Serhiy Filatov (b. 1972) is a father of four who moved to Crimea from mainland Ukraine many years ago for the sake of his daughter’s health.  He was arrested after the first round of armed searches during the night from 15-16 November 2018 and charged with ‘organizing the activities of an extremist organization’ (Article 282.2 § 1).  He was sentenced to 6 years’ imprisonment on 5 March 2020 by ‘judge’ Maria Yermakova, from the Dzhankoy District Court and taken into custody in the courtroom. That sentence was upheld by ‘judge’ Edward Belousov, from the Crimean High Court, on 26 May 2020.

Back in February, Filatov reacted to the ‘prosecutor’ demand that he get a 7-year sentence by calling this lawlessness and  pointing out that he was on trial purely for his beliefs, and the fact that he believes in God. “They are returning to 1951, to 1937, as it was in Russia”.

Artem Gerasimov (b. 1985) is also from Yalta and was arrested on 20 March 2019 in the second major armed ‘operation’ against Jehovah’s Witnesses in occupied Crimea, and also charged with ‘organizing the activities of an extremist organization’ (Article 282.2 § 1).  Several other people from Yalta were also taken away for interrogation and initial reports then said that Taras Kuzio had also been charged.

Gerasimov was originally ‘convicted’ on the same day as Filatov.  Since ‘prosecutor’ Oksana Chuchuyeva had demanded a 6.5 year real term of imprisonment, it seems likely that the steep fine, but no sentence, imposed by ‘judge’ Vladimir Romanenko from the Yalta City Court was merely because Russia wanted to test international reaction to a first illegal prison sentence in occupied Crimea, before imposing a second.

The fine was appealed by the ‘prosecutor’ and on 4 June 2020, the Russian-controlled Crimean High Court sentenced Gerasimov instead to a six-year term of imprisonment.

Viktor Stashevsky (b. 1966) is from Sevastopol. He is married, with two daughters and is also caring for his elderly mother.  He was sentenced by the ‘Gagarin District Court’ on 23 March 2021 to six and a half years’ imprisonment on the same ‘organizing extremist activities’ (Article 282.2 § 1 ) charge, and taken into custody in the courtroom. The ‘judge’ in the case was Pavel Kryllo who has been involved in at least one other politically-motivated sentence (against Ihor Movenko).  The appeal was reportedly dismissed and the sentence upheld on 10 August 2021 by ‘judge’ Vladimir Avkhimov from the occupation ‘Sevastopol City Court’.

During his final address to the ‘court’ on 23 March, Stashevsky pointed out that all charged would be withdrawn if he were just to stop being a Jehovah’s Witness.  “I do not plan to renounce my faith in God. I have been and remain a Jehovah’s Witness.”

On 26 May 2020, armed FSB, Rosgvardia and other enforcement officers burst into four homes in occupied Kerch on 26 May 2020.  Six believers in all were interrogated, and Artem Shabliy (b. 1990) the father of two small children arrested.  His 4-year-old son sustained injuries from the window pane glass which the officers broke, quite unnecessarily, during their armed storming of the building.

Shabliy was released from police custody on 28 May, and has since been under a signed undertaking to appear when summoned.

He is charged under Article 282.2 § 2 ‘involvement in an organization declared extremist’) with the criminal proceedings known to have been initiated by ‘investigator’ Valery Zarubin.  Shabliy is accused of having “drawn others into the activities of an extremist organization” by discussing the Bible with them.

The armed searches on nine Jehovah’s Witness homes in Sevastopol on 1 October 2020 resulted in the arrests of four men: Yevhen Zhukov (b. 1969); Volodymyr Maladyka (b. 1963); Volodymyr Sakada (b. 1970) and Ihor Schmidt (b. 1972).  All of them were remanded in custody the following day, however, detention was, after several months, changed to house arrest.  Zhukov; Maladyka; Sakada, and, seemingly, Oleksandr Kostenko (b. 1991) are to be ‘tried’ in the same ‘case’ with all facing the same ‘organizing extremist activities’ (Article 282.2 § 1 ) charge.

Schmidt spent six months in custody before being placed under house arrest.  He is charged, like Shabliy, with ‘involvement in an organization declared extremist’) under with Article 282.2 § 2.  His ‘trial’ began in April 2021 at the Gagarin District Court in Sevastopol, under ‘judge’ Lyudmila Tumaikina.