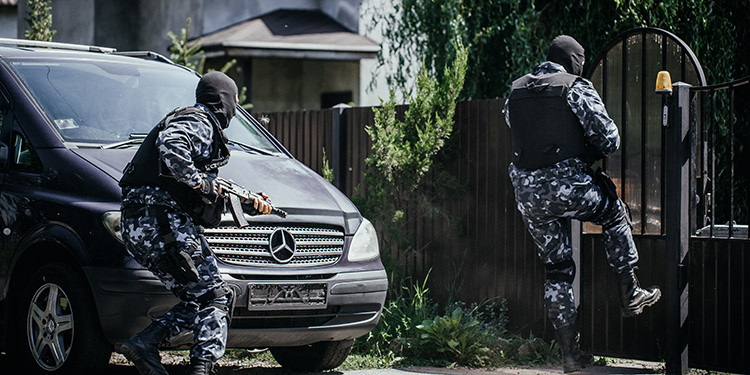 A day after the Russian FSB carried out armed searches in occupied Sevastopol, four Jehovah’s Witnesses have been arrested and remanded in custody for two months.  Although Yevhen Zhukov; Volodymyr Maladyka; Volodymyr Sakada and Ihor Schmidt are accused of ‘organizing the work of an extremist organization’ (under Article 282.2 § 1 of Russia’s criminal code), the charges pertain solely to their peaceful practising of their faith, and all are undoubtedly political prisoners.

A similar ‘operation’ took place in the evening of 4 June 2019, with at least nine homes targeted then also.  On that occasion, 52-year-old Viktor Stashevsky was arrested.  He was released from custody the following day, but charged under Article 282.2, part 1 – organizing what Russia calls an ‘extremist organization’.

Russian state-controlled media  tried to present this as the FSB having broken a ‘cell’ of ‘extremists’, however its very report described activities which could not possibly be viewed as criminal: “they held meetings, carried out propaganda of the ideas of this religious sect and also attracted new members to it”.

The ‘trial’ is taking place at the Russian-controlled Gagarin District Court in Sevastopol, under judge Valentin Norets.

As mentioned, there is every reason to be concerned about this ‘trial’, as Russia has already imprisoned two Crimean believers.

Serhiy Filatov was arrested during a ‘mass operation’ against believers in Dzhankoy from 15-16 2018.  The Russian propaganda media presented these searches, during which a 78-year-old believer was manhandled, as being about breaking up an “extremist cell”, which, they absurdly suggested, could have links with the Ukrainian Security Service.

Filatov’s ‘trial’ took place in the Dzhankoy District Court under occupation, with the prosecution claiming that Filatov had “undermined the foundations of the constitutional order and the security of the state”, by being the leader of a religious organization.  On 5 March 2020, he was sentenced by ‘judge’ Maria Yermakova to six years’ imprisonment in a medium security prison colony.

That sentence against the 47-year-old father of four was then upheld by ‘judge’ Edward Belousov of the Crimean High Court on 26 May 2020.

35-year-old Artem Gerasimov from Yalta was arrested on 20 March 2019 during a second wave of armed raids on Jehovah’s Witnesses in occupied Crimea.  At the time 40-year-old Taras Kuzio was also reported to be facing charges, however the fast-track ‘trial’ that ended on 5 March 2020 was only of Gerasimov.

It seems likely that it was because of Filatov’s sentence on the same day, that  ‘judge’ Vladimir Romanenko from the Yalta City Court  initially ‘only’ imposed a fine on Gerasimov, unlike the 6.5 year real sentence demanded by prosecutor Oksana Chuchuyeva.

The fine was challenged by the prosecutor, and it was that appeal which the ‘High Court’ on 4 June allowed, imposing instead a six-year sentence.

On 26 May 2020, the very same day that Filatov’s 6-year sentence was upheld, armed FSB, Rosgvardia and masked OMON [riot police] officers burst into four homes in occupied Kerch on 26 May 2020, with Artem Shabliy, a 29-year-old father of two, arrested. According to the Jehovah’s Witnesses in Russia website, at least seven believers were interrogated, some of them elderly.  Five people were taken to the FSB offices for questioning, although four were later released.

Instead of simply knocking on the door of the home Artem Shabliy shares with his wife, mother and small children (aged 2 and 4), the armed men broke the glass in the windows of the entrance hall.  They put handcuffs on Shabliy which were only removed several hours later, after his interrogation. The criminal proceedings are known to have been initiated by ‘investigator’ Valery Zarubin with Shabliy accused of having “drawn others into the activities of an extremist organization” by discussing the Bible with them.

Shabliy’s wife was also taken away for questioning, with the investigators trying to pressure her by threatening that Shabliy would be imprisoned. She was, however, later released. Shabliy was held in a police holding facility for two days.  He was released in the evening of 28 May under a signed undertaking to appear if summoned, with the charge indeed under Article 282.2 § 1.1 (‘drawing others into the activities of an extremist organization”).

All such prosecutions on occupied territory are in violation of international law.  So too is Russia’s use of its notorious ‘extremism’ legislation as a weapon for flagrant religious persecution, with the charges effectively against religious believers for praying and discussing their faith with others.