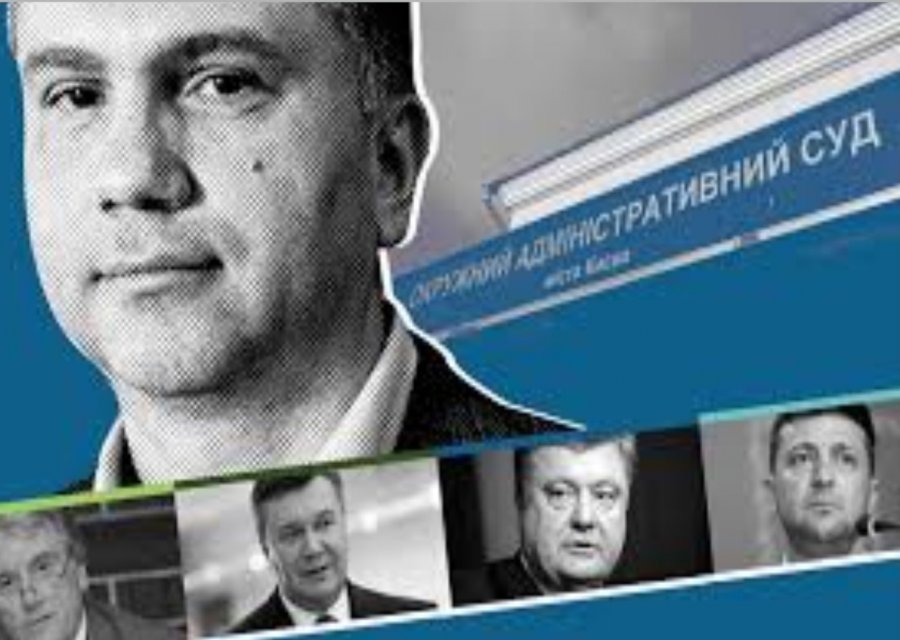 Pavlo Vovk with four Presidents whose reforms have left his court untouched. At least until now. Collage from Ukrainska Pravda

The Verkhovna Rada has finally passed a vital law dissolving the District Administrative Court in Kyiv [DACK], a court associated with appalling corruption and potentially implicated in an attempt to reinstate Viktor Yanukovych as ‘President’.  Draft Law No. 5369 was adopted on 13 December 2022 and almost immediately signed into law by President Volodymyr Zelensky.  Such haste was in marked contrast to the delay in considering a bill first tabled, by the President, as ‘urgent’ on 13 April 2021.  The bill’s adoption did, however, come just four days after the US State Department imposed personal sanctions on the head of the Court, Pavlo Vovk and two members of his family.  The sanctions were “for soliciting bribes in return for interfering in judicial and other public processes”.

The DACK dissolution also comes less than a month after publication of a Skhemy journalist investigation which, if true, would point to something much worse than ‘mere’ judicial corruption from the court’s judges.  The Skhemy program broadcast on 17 November 2022 reported that DACK were implicated in a planned attempt by the Kremlin to reinstall Viktor Yanukovych as supposed ‘President’ of Ukraine.

Two legal suits had been formally lodged by Yanukovych at the end of 2021, with these claiming that he had been illegally removed from office.  Yanukovych fled the country in February 2014 and was only removed by the Verkhovna Rada after this.  Any such legal suits were, in any case, many years too late, and should have been rejected outright for that reason alone.

Instead, one of the suits was supposed to have arrived in the court on 30 December when, purportedly, 40 of the 43 judges were ‘on leave’ and therefore unavailable to consider it.  Had they really been on leave, this would have been ample grounds for waiting, especially given the amount of time that had already elapsed.  In fact, the Skhemy journalists assert that some of these ‘holidaying’ judges were present at the court.  The most irregular part of this story is, however, the fact that there was, supposedly, an ‘automatic selection’ of judges to consider the suit, with the choice falling on Yevhen Ablov, the deputy president of the court and one of the judges facing very serious corruption charges.  He ignored the time bar, as well as the fact that, as a judge appointed by Yanukovych, he should be withdrawing himself, and accepted the suit for consideration on 5 January.  The other suit was accepted by Ihor Kachur, another judge implicated in the 2020 corruption case and also a member of the Election Commission in 2004 that tried to declare Yanukovych President despite mass rigging of the elections.  Neither of the suits should, in any case, have been considered by any but the Supreme Court.  Nor was this the end of the irregularities since both cases were supposed to be examined according to simplified procedure.  This would have meant without parties being called to give testimony, which was clearly inappropriate given the huge public importance of the issue involved.

The ‘Yanukovych suits’ coincided with Russia’s massive build-up of troops and weapons on all Ukraine’s borders and warnings from US and UK intelligence that Russia was about to both invade Ukraine and to try to overthrow its democratically elected leaders.

The Kremlin’s plans went wrong for many reasons, most importantly, Ukraine’s fierce resistance.  Kyiv did not fall “within three days”, as Moscow had seemingly expected, and the Russian invaders were finally forced to retreat.  According to the Skhemy report, examination of both suits was terminated in April as Kyiv oblast was liberated.

The Skhemy allegations surely warrant more attention, not least by Ukraine Security Service given the obvious implications of those ‘suits’ for Ukraine’s national security.

Whatever the immediate trigger for the adoption of the bill on 13 December, there had long been huge support for the dissolution of DACK, with a petition to the President signed by almost 29 thousand Ukrainians.  There were, however, warnings back in April 2021 that the court needed to be dissolved in more than just name alone, and Mykhailo Zhernakov, Director of the DEJURE Foundation was swift to spell out the crucial steps that are now needed.  In order for the new Kyiv City District Administrative Court to become a proper judicial body, and not an instrument for churning out politically motivated rulings, or rulings obtained through substantial bribes, there needs to be a transparent competition.  This, Zhernakov stresses, should be held with the participation of the reformed High Council of Justice and High Qualification Commission of Judges, as well as a new Public Integration Council, monitoring the transparency of the procedure and warning of any irregularities. Those judges, including Vovk and his deputy, Yevhen Ablov, who are especially implicated in the court’s notoriety, need to be dismissed through assessment of their qualifications or disciplinary proceedings.

The other step which is vital, and very long overdue, is to ensure that the trial theoretically underway of Vovk and others is carried through to a court verdict.  There have been multiple obstructions to this judicial corruption case even getting to trial, as well as constant attempts to get the judges at the High Anti-Corruption Court withdrawn since it was passed to the court in June this year.

DACK’s press service issued a statement on 13 December, claiming that the dissolution would deprive citizens of access to justice and would cause enormous delays (since all cases would need to be passed to the new court and begun again.  The statement also asserts that the move is in violation of Ukraine’s Constitution, legislation and the demands of the present state of war.  Ukraine’s Constitution does impose certain restrictions during martial law, for example, prohibiting amendment of the Constitution itself (and therefore any attempt at changes to the country’s territory), but these do not seem to include laws, passed in accordance with procedure, on dissolving a court.

It was in July 2019 that Ukraine’s National Anti-Corruption Bureau [NABU] first made public intercepted conversations between Vovk and other judges.  The conversations appeared to indicate the judges’ involvement in dodgy court rulings organized to ensure the removal of certain members of the High Qualification Commission of Judges [HQCJ], and appointment of others.  HQCJ has a critical role to play in ensuring (or blocking) judicial reform, particularly through the qualification assessments that it makes of judges. Its makeup was of direct interest to Pavlo Vovk who had received a negative assessment from the Public Integrity Council which could only be ignored with the support of a two-thirds majority of the members of HQCJ.

The intercepted conversations certainly appeared authentic and might have been expected to lead, at very least, to the end of Vovk’s career, as well as those of the other judges on the tapes.  Instead, nothing happened, and in July 2020, NABU revealed new recordings.  They accused Vovk, his deputy Yevhen Ablov, several other OACK judges, as well as Zenoviy Kholodniuk, the head of the State Judicial Administration, of involvement in a criminal organization aimed at seizing state power by establishing control over the High Qualification Commission of Judges and the High Council of Justice, and by creating artificial obstructions to their work.

This prompted the above-mentioned petition in the second half of 2020, demanding the court’s dissolution, and the ‘urgent draft bill’ in April 2021.  Now scrutiny is required to ensure that the new court does not become a renamed version of the old, and that those who turned DACK into a synonym for judicial corruption far beyond Ukraine face liability.