The Chilling side to Russia’s claims about Yatsenyuk as Chechnya fighterIn Putin’s next show trial, Ukrainians are cast as Chechnya separatist fightersWhere being Ukrainian is as good as being guiltyMoscow shouts ‘abduction’ yet holds Ukrainian hostages incommunicadoRussia holds 72-year-old Ukrainian hostage on absurd spying chargesRussian mother of 7 stands by her warning about Russian soldiers in UkraineRussian Mother of 7 accused of ‘treason’ released from custodyRussians call to release mother of 7 accused of revealing ’state secrets’Russian woman charged with ‘treason’ for reporting soldiers sent to UkraineRussian Newspeak: “Killed at exercises on the border with Ukraine”Russian soldiers’ deaths in Ukraine: A web of lies and fake social network pagesMore Russians aware that their sons are being sent to fight and die in UkrainePersecution of elderly activist exposing Russian soldiers’ deaths in Ukraine continuesRussian rights activist investigating soldiers’ deaths in Ukraine arrestedRussia continues lying about solders’ deaths in UkraineFirst reports on Pro-Kremlin TV of Russian soldiers killed in UkraineEntire Pskov paratrooper regiment killed in Ukraine?More Russian conscripts forced to fight in UkraineAttacked for asking why Russian paratroopers died fighting in UkraineThe Russian Invasion and Deaths Putin didn’t mention
• Topics / News from the CIS countries 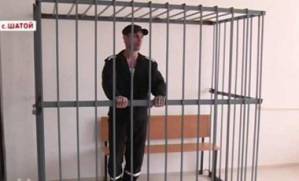 A court in Chechnya has sentenced a mystery Ukrainian national Alexander Malofeyev to 24.5 years maximum security prison colony for his supposed part in the fighting in Chechnya against federal forces in 1994-95.  It is Malofeyev’s testimony that is being used against Ukrainians Mykola Karpyuk and Stanislav Klykh, as well as for allegations against Ukraine’s Prime Minister Arseny Yatsenyuk and other prominent Ukrainians.  It seems possible that Malofeyev really was in Chechnya, but Karpyuk and Klykh had never set foot in that Russian Federation republic, and it is their trial now beginning in Grozny that Malofeyev’s fast-track sentence appears directed at.

Malofeyev was also ordered to pay 41 million roubles in compensation to the families of the victims, TASS reports.  This is doubtless theoretical since Malofeyev is already serving a 23-year sentence for an armed robbery in Russia during which two people were killed. According to the official version, “it transpired” when he was already serving his sentence that he had fought in Chechnya against the Russian federal forces in 1994-95”.  He agreed to cooperate with the court, and TASS reports that this was taken into consideration by the court, along with his “sincere repentance” and the sentence already passed on him.

The fact that he is already serving such a long sentence may explain why Malofeyev’s lawyer Adam Magomadov told journalists that his client was overall satisfied with the sentence which they would not be appealing.

It was clear from the ‘interview’  Malofeyev recently gave the state-controlled Grozny TV recently what the deal struck with the investigators entails.  Malofeyev reeled off all the names mentioned in a recent interview given by the Head of the Russian Investigative Committee [ICRF], Alexander Bastrykin, claiming that they had all fought in Chechnya.

As reported, Klykh’s lawyer, Marina Dubrovina recently explained that the case against her client and Karpyuk is based solely on Malofeyev’s testimony. The latter is supposed to have taken part in the fighting in Chechnya in 1994-95 and in 2000, with this allegedly backed by video footage.  As reported, from the file material, it is clear that he is a Ukrainian national and was in Chechnya.  He then moved first to Crimea where he committed an armed robbery or something similar and served a sentence.  In 2005 he moved to where his mother lives in Novosibirsk (Russia) and there committed more crimes. In 2009 he was sentenced to 23 years imprisonment.  As well as being HIV positive, Malofeyev is also suffering from Hepatitis B, C and tuberculosis, and is addicted to opium.  Unlike her client, Dubrovina cannot say whether Malofeyev was subjected to torture, but the threat to deprive him of medication would clearly be a powerful weapon.

It is significant that Malofeyev’s first list, written by hand, of his fellow-fighters contains 15-20 totally unknown names.   The ‘investigators’ then got onto it, and Malofeyev ‘recognized” Klykh and Karpyuk.

Malofeyev proved willing to admit to whatever was demanded of him, and to accuse others of the same.  This is the only trouble-free part of Russia’s latest ‘Ukrainian show trial’. 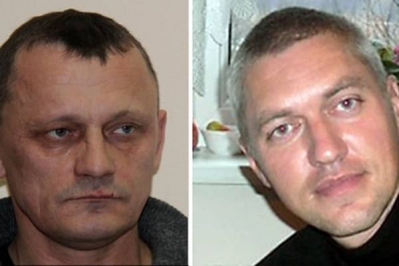 The court has agreed to a trial by jury for Karpyuk and Klykh. Since both men have stated that they were tortured into testifying against themselves, all sorts of inconvenient details are likely to be revealed in the courtroom. Karpyuk was almost certainly abducted from Ukraine in late March 2014, and for a long time there was doubt as to whether he was still alive. Klykh arrived in Russia in August hoping to visit a woman he’d met earlier in Crimea, and instead found himself in custody with no access to a lawyer or the Ukrainian ambassador and no contact with his family. Crucially the two men do not simply say that they are innocent, but that they never set foot in Chechnya. Since a panel of judges last month ignored similar allegations of torture and retraction of testimony, as well as the lack of any evidence, and sentenced Oleg Sentsov to 20 years imprisonment and Oleksandr Kolchenko to 10, it is easy to understand why the defence applied for trial by jury.

There are all too many questions in this case, as the Memorial Human Rights Centre has noted.  Since next to nothing was known about the charges against the men until very recently, the respected human rights NGO is for the moment still fairly cautious in their comments on the case.  They do, however, note that both men did not have lawyers of their own choice for most of the period up to the court hearing, with this raising serious doubts about the confessions they gave during that period in which they incriminated themselves and others. Oleg Orlov, head of the Memorial HRC, says that for him “it is entirely clear that the emergence in the court of such a case pertaining to events 12 years ago is liked with other, current events, namely the Russian-Ukrainian conflict.”

Karpyuk was brought to the SIZO [remand prison] in Grozny the night before the preliminary court hearing on Sept 15, Klykh on the morning of that day.  Marina Dubrovina has been representing Klykh only since the end of May this year, 10 months after he was taken into custody.  The situation with Mykola Karpyuk is even more dramatic.  Dokka Ishlayev has only just taken Karpyuk’s case on despite the fact that he has been in Russian detention, after possibly being seized from Russian territory or on the border in late March 2014.  Both men say that the state-appointed lawyers did not provide them with any legal assistance.

Klykh complained to Dubrovina during their first meeting of having been subjected to torture to get him to incriminate himself and Karpyuk.  Dubrovina said that there were marks from this torture on his body.

Klykh has written a formal statement detailing the torture he suffered which is, in theory, currently being examined by the Russian Investigative Committee. Dubrovina has also sent an application to the European Court of Human Rights.

After the preliminary hearing, Dokka Ishlayev told the Memorial HRC that Karpyuk also says that he was tortured, with the use of electric shocks.  He kept insisting that he had never been in Chechnya and had nothing to ‘confess to’, however they didn’t let up and eventually he signed everything that they demanded of him.

As reported, only one of the two Ukrainians in Russia’s new ‘trial of Ukrainian nationalists’ fits the bill in anything but nationality.

The Russian investigators assert that UNA-UNSO, described as a “militarized political far-right organization” supported “nationalist ideology, one of the aims and tasks of which was opposition to the Russian authorities in any form and the killing of ethnic Russian citizens of the Russian Federation”.  Four men “and others” are alleged to have been part of this organization: Kaspyuk; Klykh; Malofeyev and Oleksandr Muzychko.

In a recent interview, Alexander Bastrykin, head of the Investigative Committee  alleged that “the others” had included Ukraine’s current Prime Minister Arseny Yatsenyuk.  Bastrykin’s assertions appeared to be based entirely on ‘testimony’ of men now fully in Russian control.  If they were never in Chechnya, then they certainly did not help Yatsenyuk “kill and torture” Russians as the investigators claim. (See: The Chilling Side to Russia’s Claims about Arseny Yatsenyuk as Chechnya Fighter )

Aside from Malofeyev, only one other person of those mentioned – Oleksandr Muzychko - was ever in Chechnya and he was killed in a run-in with the police in Ukraine in March 2014.

51-year-old Karpyuk is indeed the leader of the Rivne branch of UNA-UNSO,   but there the connection ends.  He appears to have fought in Transnistria and in the Georgia-Azkhazian conflict, but not in Chechnya.

41-year-old history lecturer Stanislav Klykh has never been in Chechnya and there is nothing to even link him with UNA-UNSO.  He set off for Russia’s Oryol oblast last August to visit a girlfriend he’d met in Crimea and from then on his family knew essentially only that he was in detention.  (See: Where being Ukrainian is as good as being guilty).   His allegations of torture are set out here.

This trial is surreal for all sorts of reasons, not least the fact that Russia is seriously charging two men with fighting against the Russian army when it has been sending Russian forces, as well as heavily armed mercenaries and some volunteers to fight in eastern Ukraine against the Ukrainian army since April 2014. Most cynically, the Russian Investigative Committee appears to have taken two Ukrainians and decided that not having been in Chechnya is no impediment to holding a new show trial. Now that the men finally have lawyers, they have spoken of the methods used to obtain ‘confessions’. Let’s hope that the jury is prepared to listen.

Please write to the men!  Even a single sentence or two will send an important message both to them, and to the Russian authorities, that they are not forgotten.