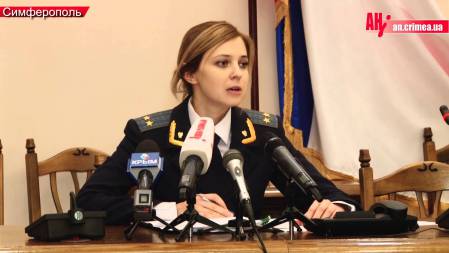 A very young Ukrainian just sentenced to 6 years’ imprisonment remains as chillingly anonymous as when his arrest in Russian-occupied Crimea was announced on May 1, 2015.   Russia claims that Maxim Filatov, who may be as young as 22, was a fighter in the Ukrainian Azov Battalion, though this remains in serious question as does everything else about the case.

The trial in the North Caucasus Military Court in Rostov was held in secret and according to special procedure since Filatov had clearly agreed to ‘cooperate’ with the prosecution in exchange for the minimum sentence.

Although the man arrested on May 1, 2015 was not named, he was alleged from the outset to have been a fighter from the Azov Battalion.  In 2015, a suspiciously broad range of crimes was mentioned and his arrest came at a time when the Azov Battalion and the ultra-nationalist Right Sector were often vilified by the media in Russia and Russian-occupied Crimea.  cast in chief villain roles.

The indictment announced in June this year claimed that Filatov had “set fire to the Chukurcha Mosque in Simferopol in April 2014 with the aim of destabilizing inter-ethnic relations”.  He was also charged with an attempted terrorist attack against the prosecutor’s office in Simferopol.   This was presented as specifically against the de facto prosecutor Natalya Poklonskaya in August 2014.   A home-made explosive was then reported to have been found in a bag left outside the building.  This was allegedly one of two such incidents, the other being in November, however Filatov appears to have been charged only with the first.

There have been a number of acts of arson against Crimean mosques since Russia’s annexation, with many of them taking place after Filatov was arrested.

Back in May 2015, when Poklonskaya first announced that such an arrest had been made, the Azov command stated that no member of the battalion had been arrested.

At that time, Vyacheslav Likhachev, researcher and long-time monitor of xenophobia and anti-Semitism, reported that a young man was also facing charges over an act of anti-Semitic vandalism on a synagogue within 24 hours of Russia’s seizure of control.

Likhachev expressed scepticism, pointing out the young man’s action would have been, at very least, strange.  He would have needed to have desecrated the synagogue, set fire to the mosque and attempted a terrorist attack, hurtled off in August – September 2014 to fight for Azov in Donbas only to return to Crimea in the spring of 2015 to await arrest.  The news of his arrest came at a time when Poklonskaya and others collaborating with the occupation authorities were making a lot of vague assertions about Azov plans for ‘provocation’ for the May holidays.  Nothing came of that, nor of the anti-Semitic graffiti charges.

It is unclear whether Filatov has a lawyer of his own choosing, or whether, as in many such cases, the investigators provide their own ‘lawyers’, used to sign documents and encourage the person imprisoned to ‘confess’.

The FSB have other methods of ‘encouraging’ confessions, as political prisoners like fellow Crimeans Oleksandr Kostenko; Gennady Afanasyev and filmmaker Oleg Sentsov have described in terrifying detail.  This case has been so secret that there is no way of knowing what the young man has been through.