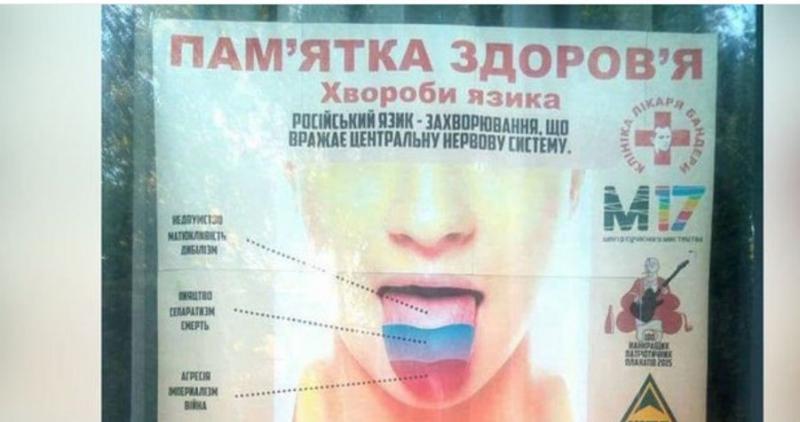 An obscure poster, which appeared as a humorous entry in a competition two years ago, has been used by at least one Russian embassy and all Russian state-controlled media as proof of Ukrainian rampant anti-Russian ‘racism’ and antagonism to the Russian language.  The fake is absurd, but menacing, given Russia’s persistent attempts to convince Ukrainian Russian-speakers and the international community that its invasion of Crimea, and military engagement in Donbas, were about ‘protecting’ the Russian-speaking population.

The rather gross poster shows a person poking out their tongue which is coloured like the Russian flag.  This is purportedly a health advice poster about “diseases of the tongue” (which in Russian is the same word as for language).  The words underneath assert that “The Russian language is a disease that affects the central nervous system.  The Russian language is extremely contagious. It’s enough to find yourself in the company of those infected, or to catch the virus from the media.  The infection spreads swiftly among young people”, etc.

All such fake scandals in the Russian media follow much the same pattern, with a Ukrainian source invariably cited.  This time the sensational claims are made in a newspaper – Vesti – with suspect content and extremely murky sources of funding. With a purportedly ‘local’ source to imitate credibility, the report then takes off in Russia, and occasionally reaches the international media.  This has all been going on for a very long time, with some UK and German media having got their fingers burned in 2008 when they re-broadcast flagrant lies about a ‘Hitler doll’ (and worse) which was supposed to be all the rage in Kyiv.  It was Russia’s warmongering propaganda from 2014 that finally alerted the international community to the enormous amounts of money being fuelled into misinforming the public.

No addresses were provided of the billboards which were supposedly all over Kyiv and not one could be found.  The placard was eventually tracked down on Facebook, and proved to be the 2-year-old entry in a competition from Ivan Hranatkin.  It had recently appeared as a comment to a Facebook post, and been reposted a few times.  That was more than enough for hysterical reports on Russian state-controlled television and for the Russian Embassy in the United Kingdom to tweet the poster, against a background so that it seems like a billboard, with the words: “Racist posters in Kiev. Russian language equal to infection and bad IQ. Food for thought”.

The Russian Foreign Ministry closely monitors all Ukrainian media, and will know the reports are false.  The Russian Embassy’s tweet has not been removed which surely also provides ‘food for thought’.

The report on TV Zvezda, which is linked with the Russian Defence Ministry, is typical of most, though rather more honest than the Russian Embassy in admitting that the image had been taken from Facebook.  That, however, is clear only to those reading the website.  Those watching the broadcast see images of Kyiv, with the reporter claiming that these posters are part of an ‘advertising campaign’ and implying that they are widely available.

The presenter ends by referring to a new language bill tabled in Ukraine’s parliament and scaring the viewers by implying that the bill will impose fines for speaking Russian.  Various language bills have been drawn up in recent months.  None proposes the “language genocide” that the Russian media have been frightening Russians and Russian-speakers ever since the first appeared.

Similar reports can be found on the state RIA Novosti agency, Izvestia, Life.ru, and others.  Some began pointing to errors on the placard, probably in response to the suspicion that the poster itself was a Russian fake.

Supposed ‘linguistic genocide’ is a favourite for Russian fakes.  In April 2015, Rossiya-1 claimed that Ukraine’s President Petro Poroshenko had stated in a major address that  “we will always speak only Ukrainian”  He had said only that Ukrainian would continue to be the only state language, but that was not good enough for the Russian channel which claimed: “Poroshenko today stated that the Ukrainian language would always be the only State language despite the fact that the special status of Donbas agreed in Minsk by the ‘Normandy Four’ envisages that they will be able to speak Russian freely as well”.

The fakes and downright lies are brazen, but, unfortunately, unlikely to be recognized as such by the Russian audience and those parts of Ukraine under Russian occupation.  After finally admitting that it was Russian soldiers without insignia who had invaded Crimea, Russian President Vladimir Putin began pushing the line that Russia was ‘protecting’ Russians / Russian speakers.  There is no evidence at all that they were in any need of ‘protection’, but the Kremlin continues repeating this lie, while Russia’s Investigative Committee periodically initiates criminal ‘proceedings’ over what it claims is the “genocide of the Russian-speaking population of Donbas”.