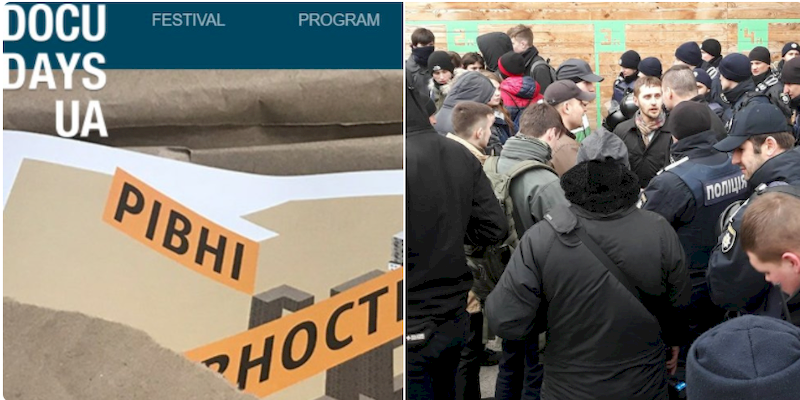 Over 50 young far-right activists descended on events linked to the Kyiv Docudays Film Festival on 26 March.  As well as demolishing posters promoting tolerance and diversity, they also tried to prevent people from attending a panel discussion on far-right movements.  In refreshing contrast to at least one previous occasion, the police acted swiftly, ensuring that the event took place and that the participants were able to safely leave after it.

The annual International Human Rights Documentary Film Festival Docudays UA includes both film viewings and human rights events (exhibitions, panel discussions, etc.).  The latter are based this year at the IZONE Creative Space, and it was this location that was targeted by members of far-right groups.  Although led by an older person, it seems most of the individuals who took part in the raid were adolescents.

According to Kateryna Lutska, who is in charge of publicity for the human rights events, the louts burst into the IZONE Gallery and ripped down posters promoting respect for diversity.  She says that they trampled four posters showing people with disabilities; Roma; transgender; and people living with HIV.

They tried to remain in the building, claiming that they wanted to take part in the discussion on ‘Human rights and the growing prevalence of far-right movements’.

The organizers moved to the first floor and called the police who initially simply removed the right-wing activists from the building.  This did not resolve the problem, however, and the Human Rights Information Centre reports that there were as many as 70  far-right activists who stood outside the building trying to prevent people attending the discussion.   They did not stop short at simply blocking Mykola Myrny, a journalist for the Centre.  When he began videoing them, one of the louts hit out at his telephone causing it to fall to the ground.

The police did respond by unblocking the entrance and making sure that the right-wing activists moved outside the IZONE territory.  Tetyana Pechonchyk,  Director of the Centre reports that they guaranteed the participants’ safety during and after the event.   Both the members of the panel and those attending were taken away from IZONE by minibuses.

It is certainly important that the police did not abandon participants in the discussion to likely attack as they left the premises, but it is frustrating that people should need to be ferried to safety in buses.

While public support for far-right groups in Ukraine remains low, members of such groups are often aggressive and sometimes downright violent in trying to prevent events they don’t like.

It is they who for a very long time seriously obstructed Equality Marches in support of LGBT rights.  It was really only in June 2016 that the annual event passed in Kyiv without any significant incidents.  This was thanks mainly to the authorities finally providing sufficient police backup and protection for participants, in the face of threats from the Right Sector and other ultra-nationalist and / or far-right groups.  The event in June 2017 was also peaceful.

A particularly worrying failure by the police was seen with the blocking of a remembrance gathering in Kyiv on 19 January 2018, the anniversary of the murder in Moscow of human rights lawyer Stas Markelov and Sevastopol journalist Anastasia Baburova.

The two were murdered by members of the neo-Nazi ‘Militant Organization of Russian Nationalists’, or BORN.  That alone casts doubt on the Ukrainian C14’s attempts to deny their neo-Nazi leanings, and their claim that those honouring Markelov and Baburova were ‘separatists’ were insultingly absurd.

There was concern on that occasion at the police failure to protect people’s right to take part in a remembrance gathering.  It was especially worrying that the only people who were taken to police stations (supposedly to ‘establish their identity’) were people who had come for the remembrance gathering.  Some of them later came under attack after leaving the police buildings, with the question arising of who, if not the police, had told the C14 thugs which police station to wait outside.

While C14, as well as some other far-right groups, like to appear outside court hearings, and present themselves as fighting corrupt courts, the power of oligarchs, etc., they have also openly offered services as effectively paid thugs.