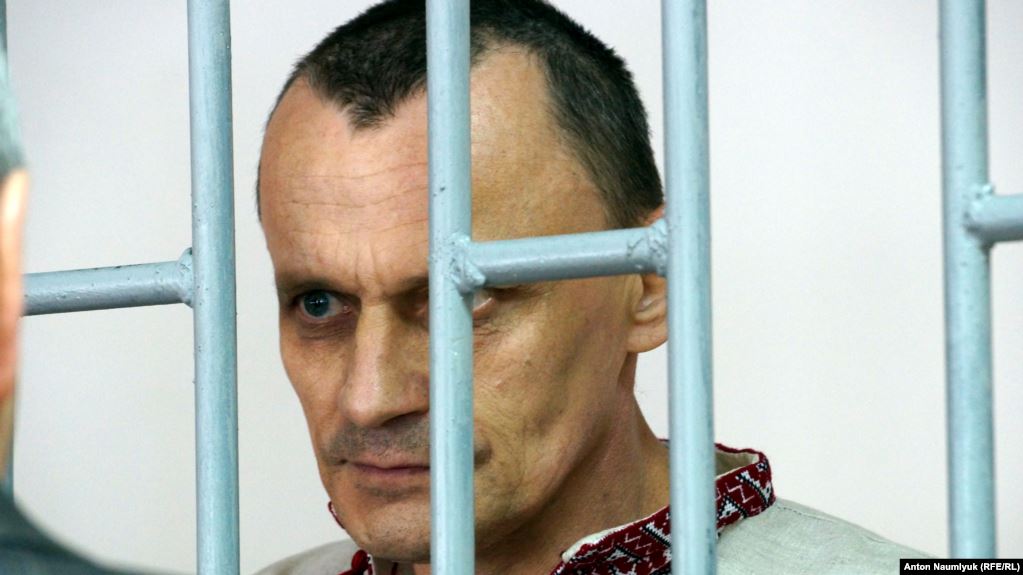 Mykola Karpyuk turned 55 on 21 May, 2019, with this his sixth birthday in Russian captivity.  The first two birthdays were during the 18 months in which so-called Russian ‘investigators’ held him totally incommunicado and tortured ‘confessions’ out of him.  Karpyuk was the first of the political prisoners seized after Russia’s invasion of Crimea essentially only because they were Ukrainian.

Karpyuk was seized by the FSB when trying to cross into Russia on 17 March 2014, seemingly after he and / or other leaders of the Ukrainian nationalist organization Right Sector were tricked by the promise of negotiations with people close to Russian President Vladimir Putin.  There was effectively no information about his whereabouts, or even about whether he was still alive, until September 2015.  This was shortly before the travesty of a ‘trial’ that Russia enacted of Karpyuk and Stanislav Klykh, a historian from Kyiv, who had been tricked into coming to Russia in August 2014 to visit a woman he had met in Crimea.

Everything about this case was of breath-taking cynicism and lawlessness. Both Karpyuk and Klykh were held incommunicado for 18 and 10 months respectively, with the only ‘lawyers’ they saw being appointed by the ‘investigators’ and there essentially only to provide signatures on documents. These supposed lawyers would have been fully aware of the methods being used in both men’s cases to extract ‘confessions’ yet said nothing.

Russia claimed that Karpyuk and Klykh had, together with former Ukrainian Prime Minister Arseny Yatsenyuk and several other prominent Ukrainian politicians, taken part in battles in Chechnya in Dec 1994 and Jan 1995, carried out all kinds of atrocities and killed 30 Russian soldiers.

Karpyuk, who was the deputy head of Right Sector and member of the older Ukrainian National Assembly – Ukrainian Peoples’ Self Defence (UNA UNSO)  was accused of creating and leading a band called ‘Viking’.  Klykh, who had once briefly been a member of UNA-UNSO and who had been at university in 1994/5, was supposed to have taken part in it.

This surreal ‘case’ was based entirely on the men’s confessions, as well as the provably false testimony provided by a Ukrainian national Oleksandr Malofeyev who was already serving a 23-year sentence in Russia, and who was directly dependent on the Russian prison authorities for life-saving medication.

There are medical records which substantiate Klykh’s consistent allegations that during this period he was subjected to terrible torture and that he was plied with psychotropic drugs.

There is also confirmation in the sheer insanity of the ‘confessions’.  While Russian Federation courts were willing to ignore the men’s retraction of their testimony; their alibis and hard historical facts, the same will not be true of the European Court of Human Rights.

There is documented evidence that Klykh had been taking exams in Kyiv at the time that he was supposed to be in Chechnya, and plenty of witnesses to confirm that Karpyuk was in Rivne, caring for his dying mother.  That is without taking into account that the Russian ‘investigators’ had insisted on including well-known Ukrainian politicians who doubtless also have strong alibis.  Russia has, quite incredibly, managed to get Yatsenyuk detained once, at Geneva Airport in December 2017.  It took all of ten minutes, however, for the Swiss authorities to accurately assess Russia’s wish to ‘prosecute’ the Ukrainian politician and to let him continue his journey.

The authoritative Memorial Human Rights Centre has followed both Russia’s wars in Chechnya and was therefore well-placed to assess the prosecution’s case.  In a four-part analysis, it demolished the entire indictment and left no doubt about the methods that had been used to extract insane ‘confessions’ to heinous crimes supposedly committed together with Yatsenyuk & Co.   The methods had included threats to apply the same torture to Karpyuk’s wife and son.

It was on the basis of this devastating assessment of the charges that in February 2016 Memorial declared both men political prisoners.  It called the trial part of the unrelenting anti-Ukrainian campaign in the Russian state media and pronouncements from high-ranking Russian officials, including Alexander Bastrykin, a close Putin associate.

The trial took place in Grozny, and there is evidence of witnesses being threatened and harassed by thugs, working for the head of Chechnya, Ramzan Kadyrov.  It seems likely that the jury members were also put under pressure.  It is difficult to understand otherwise how they could have found men guilty of killings that either never happened, or that happened in different places and could not have been carried out by the two men, even if the latter had not had alibis.

Klykh showed signs of serious mental disturbance from soon after the trial began, and there were pleas, including from a psychiatric association in the United Kingdom, for him to receive a proper psychiatric assessment .  This was refused, and instead the ‘court’ in Chechnya charged and convicted Klykh of having ‘insulted’ a prosecutor during a court hearing, when he was in a very disturbed state.

Russia has since staged cynical ‘compensation suit’ hearings, in which Karpyuk and Klykh were ordered to each pay 500 thousand roubles ‘compensation’ for a death that neither man had anything to do with in a country that neither had set foot in.

PLEASE WRITE TO BOTH MYKOLA KARPYUK AND TO STANISLAV KLYKH!

Even a single sentence or two will send an important message both to them, and to the Russian authorities, that they are not forgotten.  If you are able to write in Russian and are interested in religious and philosophical issues, Karpyuk would be delighted.  Please do include your return address so that the men had write back, and if possible enclose a couple of pieces of light paper, since that can also be in short supply.

Since letters do need to be in Russia to pass the censor, there is a sample letter below which you could write out (in block letters is fine), perhaps together with pictures or photos.

[Dear Nikolai, Happy Birthday!  I wish you good health, courage and patience and hope that you will soon be released.  You are not forgotten.]

[Dear Stanislav, I wish you good health, courage and patience and hope that you will soon be released.  You are not forgotten.]