Zelensky appoints Kolomoisky lawyer with shady past to head his Administration 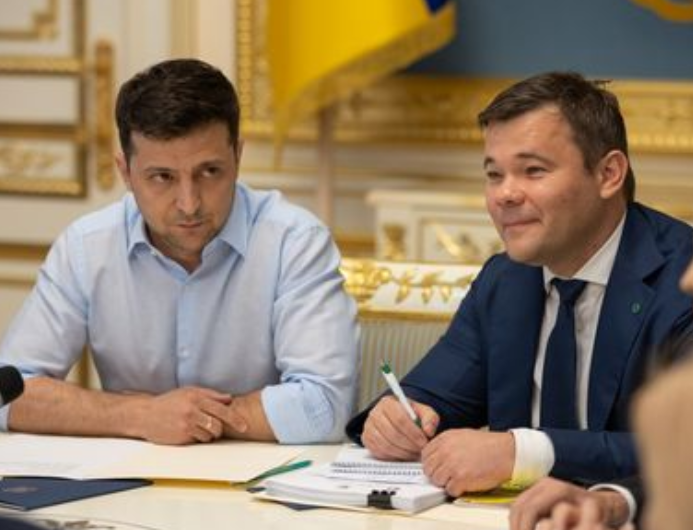 A day after his inauguration, Ukrainian President Volodymyr Zelensky has appointed Andriy Bohdan Head of his Administration.  This is despite reported warnings over such an appointment because of Bohdan’s immediate past as lawyer to oligarch Ihor Kolomoisky and, more importantly, because Bohdan is prohibited from holding public office because of his role during the regime of former President Viktor Yanukovych.  The appointment comes on the same day that Zelensky issued a decree dissolving parliament, another move of disputed legality.

42-year-old Bohdan twice served as government representative on ‘anti-corruption policy’ under the Yanukovych regime.  The first appointment was shortly after the extremely suspect moves that resulted in the Party of the Regions immediately gaining control of parliament following Yanukovych’s victory.  Bohdan was then also appointed ‘Deputy Minister of the Cabinet of Ministers’.    The post was dissolved in 2011, and there is no information as to what Bohdan did instead, however he was reinstated by Prime Minister Mykola Azarov on 3 July, 2013 and remained in that position until after Yanukovych, together with Azarov and others, fled to Russia at the end of the Euromaidan protests.  Following his dismissal in March 2014, Bohdan became an adviser to Ihor Kolomoisky who was then Governor of the Dnipropetrovsk oblast.  He has since been Kolomoisky’s lawyer, and was informally in charge of the Zelensky presidential campaign and his adviser on legal issues.

In accordance with the Law on Cleaning up Government (or simply the lustration law), Bohdan is prohibited from holding public officer for 10 years because of his posts during the Yanukovych regime.  There are many reasons for criticizing the failings of this law, passed in September 2014.  It does, however, seem reasonable that a person who was twice responsible for representing the government’s largely fictitious anti-corruption policy, should fall under its scope.

This is not how Bohdan himself presented the matter in an interview on 21 May to Channel 112. He claimed that the post of head of the President’s Administration is not part of the civil service and that he is therefore not prohibited from holding the post.  He also asserted that he had fallen under the force of the lustration law “unfairly”.  This, he alleged, was because he had uncovered corrupt dealings by which billions in public funding were being syphoned off.  He claims that the person behind the corrupt arrangement was one of the authors of the law on lustration.  He did not, however, provide a name to back this accusation.

Bohdan was also scathing about the law which does, indeed, have many flaws.  His claim, however, that all of those who wanted to escape its force were able to is contradicted by his own example.  He may have been appointed by Zelensky, however the fact that he is subject to this law does appear to cast a shadow on this appointment.

As reported, information about the ban on Bohdan holding public office emerged on 17 April,  just before the second round of voting, in circumstances that arouse some concern.  Skhemy investigative journalists reported an alleged secret meeting between Bohdan and Stanislav Shevchuk, who has now been removed by his colleagues, but who was then Head of the Constitutional Court.   The importance of such a meeting seemed obvious given that the Constitutional Court was considering whether to declare the Law on Lustration unconstitutional. Since any just ruling by the Court is final, this would in principle overturn any concerns about Bohdan holding high posts in the Zelensky administration.

A session of the Constitutional Court, reportedly to discuss the lustration law, had been scheduled for 18 February.  It was cancelled at the last minute without any explanation, possibly because of the publicity that the Skhemy report received.

There has been one extremely worrying judgement by the Constitutional Court in recent months, finding the law on unlawful enrichment to be ‘unconstitutional’.  A similar judgement now regarding the law on lustration is likely to be viewed by many people as suspect given the Skhemy report and Bohdan’s position.

During the same 112.ua interview, Bohdan stated that they were considering putting “the question of achieving a peaceful settlement with Russia” to a national referendum “so that not only deputies vote, and not only the President, but so that the people of Ukraine take that decision”.

The idea of maximum use of referendums was one of the few specifics of Zelensky’s program prior to his election.  Words about asking the people may sound appropriately democratic, but referendums can be easily manipulated. Zelensky’s assurances that no deals would be reached with Russia that involved, for example, quietly forgetting about Crimea in exchange for peace in Donbas, would prove empty if a referendum were framed in such a way that the responsibility for such a decision was laid on “the people”.

Details about what such a ‘referendum’ would entail are, therefore, eagerly awaited, as is information as to how the Law on Lustration appears to have been powerless to prevent its violation via Zelensky’s appointment of head of his administration.