Lutsenko claims witness in his favour was dismissed from MIA 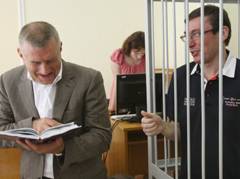 The trial is coming to an end of former Internal Affairs Minister, Yury Lutsenko who has been in detention now for more than 13 months in a prosecution viewed with concern both in Ukraine and abroad.

Mr Lutsenko said on Tuesday that Bohdan Vasylenko had been dismissed from the Ministry of Internal Affairs after giving testimony in court during the Lutsenko trial. Defence lawyer Oleksy Bahanets added that the investigator had previously threatened Vasylenko with dismissal. The lawyer also accused the investigators of putting pressure on witnesses during the pre-trial investigation and said that they had been selective in seeking proof. He said that out of the 86 witnesses questioned in court, not one had confirmed Lutsenko’s guilt.

Bahanets mentioned that witnesses had been questioned at night, often despite their tiredness, and wrong information had been added to the protocols. He mentioned Valery Melnyk who during the court hearings recounted how he had been held in the prosecutor’s office, not allowed to the toilet, nor to re-bandage wounds after an operation. Melnyk himself spoke of pressure by the investigators. Bahanets added also that before his questioning in court on 7 October 2011 Melnyk had been twice phoned from the Prosecutor’s office asking him to confirm his testimony given at pre-trial investigation stage during the court hearing.

He said that witness Maretsky had been questioned until 22.00, and the man, who has heart problems, had signed the protocol without reading it.

He named some and mentioned that there were others also who rejected the protocols of their interrogations (see links below for more information).