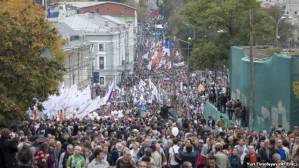 Tens of thousands of Russians have taken part in a demonstration in the Russian capital to demand social and political reforms -- and to keep the pressure on President Vladimir Putin.

The Moscow marchers, who assembled near Pushkin Square, marched through the city to a rallying point on Prospekt Sacharova. There, opposition leaders took turns addressing the crowd.

Officials estimated the crowd at around 15, 000, though a number of sources put the figure closer to the 25, 000 allowed by the Moscow mayor's office when the permit for the assembly was issued.

The event appeared to draw a mix of liberals, nationalists, leftists, and gay activists.

It passed largely peacefully, although later reports suggested some demonstrators had been detained.

"Our main aim is to force the authorities to start a dialogue, " activist Sergei Udaltsov told protesters. "The summer went by -- it's been three months since our last march. Not a single demand [of the last protest march] has been met. Not a single political prisoner has been released -- on the contrary, repressions only picked up pace, more people have been arrested."

Late reports claimed Udaltsov had been detained by Interior Ministry riot police along with a number of his supporters as they were leaving the demonstration.

The number of protesters at the Moscow gathering quickly dwindled once the more prominent opposition speakers had left the stage.

Some demonstrators expressed a creeping fatigue with the protest movement and frustration over a fragmented opposition comprising a wide range of political movements and beliefs.

Ahmed Mogamedov, a 25-year-old Internet shop owner dressed in a dark suit, suggested this was the last opposition protest he was likely to attend.

"The speakers are not saying what the people need to hear. Not at all, " Mogamedov told RFE/RL. "I believe some concrete proposals are needed that can bring about real results but here we are only hearing catchy phrases like 'Down with Putin' or 'Remove Putin.' These people here are not able to achieve it."

Olga Golub, a 30-year-old legal assistant, expressed a hint of defeat, saying the opposition could not bring about change as long as the majority of the country's major media groups remained under the sway of the Kremlin.

"Personally I think that all these rallies -- regardless of how many people participate in them -- will not change anything, " Golub said, "because the main force which keeps Putin in the Kremlin is information. As long as they own the means of information, we are doomed to continue shouting from podiums and on the web, which is free so far. What is needed -- in a positive, not a violent manner -- is a takeover of television. If Ostankino [federal TV channel] joins our side -- the side of truth -- then we will have substantial results."

Around 7, 000 uniformed and plainclothes security officers were deployed in Moscow's center and along the main roads that protesters were expected to use.

RFE/RL correspondent Tom Balmforth said from the scene that security forces included OMON riot police as well as Interior Ministry troops. A police helicopter was monitoring the progress of the march and subsequent rally.

The marchers chanted slogans including "Russia without Putin" while helium balloons painted with smiling faces were floating overhead.

Among the slogans on banners are "Putin is a parasite, " and the crowd at the rally chanted "Russia without Putin!"

"You have to understand that a country so rich in natural resources has its people living in utter poverty while a little bunch of people who are close to Putin -- the ones whom he used to play judo with or who used to be his neighbors around his famous dacha -- usurped all the natural resources, " Andrei Sorokin, an electric engineer, told RFE/RL at the demonstration. "It is only on paper that in Russia natural resources are a national treasure. In reality they are neither state nor national but belong to a bunch of people around Putin."


"Laws are being adopted that, one way or the other, reduce the scope of one's individual rights, " a lawyer and one of the marchers, Viktoria, told RFE/RL. "A chance to feel yourself as a free person in your own country is diminishing. There is less and less air to breathe. However, if you are not on the front lines of the opposition, it may be difficult to fully grasp that this is going on. At least for now."

Public protests have dwindled in size since the demonstrations held before this year's March presidential election, when more than 100, 000 people gathered for antigovernment demonstrations to object to Putin's orchestrated return to the Kremlin.

The authorities have taken steps to muzzle public activism, most notably by arresting prominent opponents, including three members of the Pussy Riot protest group, who last month were sentenced to two years in prison for staging an anti-Putin performance inside Moscow's prominent Christ the Savior Cathedral.

The Vkontakte social-networking site on September 15 blocked access to a "Free Pussy Riot" group, an action it frequently takes on days of mass demonstrations.

Enumerating Demands And An Eye On Momentum

Opposition leaders had called for the March of Millions to demand social and political reforms, fair elections, and the right for government critics to make their case on state television.

Other demands include early parliamentary and presidential elections and more government support to working families and to low-income groups, he said.

"We ought to continue all this to put pressure on the authorities, " former Prime Minister and current head of the recently re-registered People's Democratic Union party (Parnas), told RFE/RL. "Our main aim is to release political prisoners, to halt political repressions, and to force authorities to sit down for talks with the opposition and the civil society in order to hold free elections."

Parallel demonstrations were held in a number of other Russian cities, including St. Petersburg, Yekaterinburg, and Nizhny Novgorod.

Some protesters were reportedly arrested in Nizhny Novgorod, Ufa, and Barnaul.

In Moscow, Udaltsov, after declaring an end to the rally, urged people to remain committed to the protest movement, and called for the next march to take place October 20.

Other activists have proposed holding the next protest on Putin's 60th birthday, which falls on October 7.

A spokesman for Putin said the president had not followed the Saturday events because he was in Sochi holding a meeting with Belarusian leader Alyaksandr Lukashenka.

The demonstrations, the first major antigovernment protest in three months, came one day after Russia's parliament expelled opposition politician Gennady Gudkov from its ranks and stripped him of immunity from criminal prosecution. Gudkov was among the marchers in Moscow.

Opposition leaders have charged that Gudkov's expulsion is part of a Putin campaign to remove government critics from power.

The September 15 marches were also the first mass opposition actions since the sentencing of three members of punk band Pussy Riot in mid-August to two years in prison for an anti-Putin protest in an Orthodox cathedral.

The tough sentences they were given have become a rallying cry for many in the opposition.

Based on reporting by RFE/RL correspondent in Moscow Tom Balmforth, RFE/RL's Russian Service, and additional reporting by dpa, AFP, Reuters, and ITAR-TASS