“The government has made its choice, now it’s our turn”UCU: The Fate of 46 million Ukrainians is at stakeEU Association supporters gathering in protest at government’s about-face on EuropeGovernment abandons preparation for EU-Ukraine Association AgreementVerkhovna Rada rejects all Tymoshenko billsTymoshenko decision again deferredUS Senate urges Ukraine to release former PMEU issues ’urgent appeal’ to YanukovychStubbornly non-working groupHopes dwindlingAzarov: EU will be to blame for Association failureBad score for European integrationParliamentary committee rejects all four “Tymoshenko” billsSo who is obstructing the EU-Association Agreement?Party of the Regions commissioned material prepares way for Vilnius fiasco"New Tymoshenko Case" is dreary déjà vuAnalyst: Ukraine’s future in Yanukovych’s handsAssociation Agreement decision could be postponed till 2014Compliance RitualsConflicting claims about “the Tymoshenko question”
• Topics / Politics and human rights 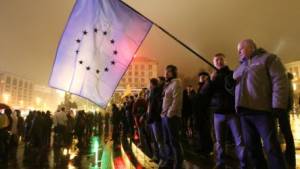 Around three thousand people have gathered on the second day of the indefinite protest EuroMaidan on Maidan Nezalezhnosti [Independence Square] in the centre of Kyiv.  The crowd was earlier addressed by the leaders of the opposition Batkivshchyna and Udar parties and by the head of the civic movement Third Republic Yury Lutsenko.  Vitaly Klitschko (Udar) said that he hoped the rally would prompt the resignation of Prime Minister Azarov’s government and force Viktor Yanukovych to sign the EU-Ukraine Association Agreement.

As of yet Ukraine has failed to comply with two major conditions – regarding Tymoshenko and on reform of the public prosecutor – so it is not necessarily up to Yanukovych.  On the other hand, the announcement on Thursday that Ukraine was suspending preparations for the Association Agreement could not have been taken without the president’s involvement.

Yury Lutsenko, whose politically motivated imprisonment for over two years was widely believed to be in retaliation for his vital role in the Orange Revolution exactly 9 years ago stressed in his address that the EuroMaidan would be effective only if people gather at the time set, disperse and then again gather in greater numbers at the time announced by the organizers.

The main protest is planned for Sunday, Nov. 24.

The Berkut riot police, present through the day, left around 18.00.  As reported, the District Administrative Court on Friday morning issued a ban on tents and other “small architectural objects” on Maidan Nezalezhnosti, Khreshchatyk and European Square.  This is yet another example of the arbitrary bans commissioned by the authorities and enabled by the lack of proper legislative regulation of freedom of peaceful assembly in Ukraine. It also effectively prevents the kind of ongoing protest seen 9 years ago when Ukrainians upheld their right to democratic elections.

Information about the protest from Dzerkalo Tyzhnya, photo from Radio Svoboda