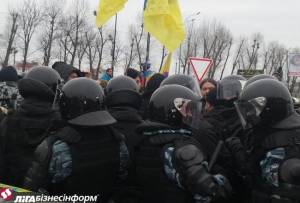 Two months after Viktor Yanukovych “applauded” EuroMaidan protests, courts have once again come up with blanket bans of peaceful protest in central Kyiv, and near the president’s highly controversial residence at Mezhyhirya.

Participants in a Jan 14 AutoMaidan car procession were read the ban on any actions near Mezhyhirya up till Jan 31.  Since all attempts to hold peaceful protests near Mezhyhirya since Yanukovych became president have met with court bans, large contingents of Berkut riot police and brief terms of imprisonment, there is no reason to expect the situation to change on Feb 1.

The same, unfortunately, applies to the ban on protest in the centre of Kyiv since this ban extends the previous ban reported here.

Although the court ruling is dated Jan 6, it only became known on Wednesday and appears to have been passed on Christmas Eve (in the Orthodox tradition) in written form only. It will be appealed, but this must be done by the end of Thursday, Jan 16.

The ban this time was imposed by Judge Anna Savchenko from the District Administrative Court in Kyiv in response to yet another application from the Kyiv City State Administration.  The ban is for 2 months, until March 8, 2014.  If not revoked at appeal level, of course, however experience thus far has not been positive, despite the obvious breach of the Constitution. This states clearly that peaceful assembly should be banned “only in the interests of national security and public order, with the purpose of preventing disturbances or crimes, protecting the health of the population, or protecting the rights and freedoms of other persons.” (Article 39)

The Kyiv Administration and judges have proved ingenious if unconvincing in finding novel ways to interpret this constitutional norm.  The court ruling lists all kinds of claims from the Kyiv Administration in supposed substantiation of its claim that peaceful protest in the centre of Kyiv creates a threat to national security, public order and the rights and freedoms of citizens.  The traffic police, for example, stated on Nov 13 2013 that large-scale protests at one intersection and adjacent territory “will adversely affect traffic safety and make it difficult for special purpose vehicles (Emergencies Ministry, ambulance, police. etc) to pass, with this creating a threat to the life and health of the population, the rights and freedoms of other people”.

None of the arguments given would have any chance of being approved by the European Court of Human Rights, and they seem added to create the semblance of compliance with the law. The ban, as last time, was probably ordered and judge Savchenko, unfortunately, complied.

With rumours rife on Wednesday evening that the authorities are planning to storm Maidan again and disperse protesters by force, this court ban has been interpreted as especially sinister.  The fact that it was learned about today may be of relevance, however it is not the first such blanket ban and until Thursday it can be appealed against.

This unfortunately does not mean that forcible removal of peaceful protesters at some point is not a possibility, with the court order being waved about as supposed justification.  The bans on peaceful protest in Kyiv and Mezhyhirya coincide with repressive measures against AutoMaidan activists, and a stubborn refusal to apply the amnesty law theoretically in force since Dec 25.  They make a jeering mockery of the president’s declared “applause” for peaceful and democratic protest. Halya Coynash