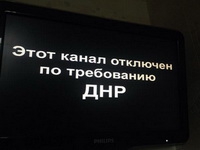 This channel has been switched off at the demand of the DPR [the militants].

OstroV reports that a local operator has been forced by the self-proclaimed Donetsk People’s Republic to switch off four Ukrainian channels.  Outraged viewers were told by an employee of the provider that four channels will be temporarily off air “by order”: Channel 5; UTV-1; Rada and Donbas. One viewer asked whose order and was told: “At the order of the DPR. This is temporary, don’t panic. You see what times we’re in”.

Other providers have also removed a number of channels. Some claim that this is ‘prophylactic work’, others – temporary technical problems.