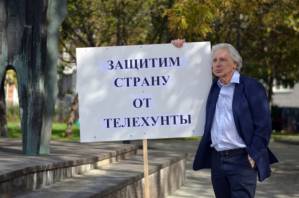 Prominent Russian lawyer Henry Reznik has held a one-man picket in Russia against the latest Russian media production purporting to ‘expose’ famous musicians and others who have criticized Moscow’s policy on Ukraine.  Novaya Gazeta shows Reznik with his placard which says it all: “We will defend the country against the telejunta”.   Reznik held his picket near the monument to Joseph Brodsky, poet and Nobel laureate whom the Soviet authorities first applied punitive psychiatry against, then sent to labour camp and finally banished from the country in 1972.

Reznik’s telephone has not been working lately and he suspects that it may have been cut off deliberately.  Those he came out to defend, such as famous musicians Andrei Makarevich and Yury Shevchuk have suffered enormous harassment over recent months and been the target of a vicious hate campaign in the media.

On Aug 24 the pro-Kremlin TV channel NTV broadcast a programme entitled “13 friends of the junta”.  The thirteen are public figures who have expressed their opposition to the actions taken by the Russian authorities with respect to Ukraine.

Such NTV productions cannot be taken lightly.  In July 2014 two Russian opposition activists received long sentences following a trial where the only evidence was ‘information’ from an NTV so-called documentary.  The overtly anti-opposition programme claimed to ‘prove’ foreign organization and funding of ‘mass riots’ – namely the anti-Putin protest on Bolotnaya Square in May 2012.   One of the two men, Leonid Razvozzhaev was even abducted by the Russian FSB in the middle of Kyiv on Oct 17 2012 and forcibly taken to Moscow where he has been held in custody ever since.

On March 15 this year, the day before the ‘referendum’ on joining Russia was held in the Crimea, around 50 thousand Russians took part in a march and rally in Moscow against Russia’s military aggression. The protesters called for Russia to withdraw its troops from the Crimea and to stop interfering in Ukraine’s affairs.

The rally was addressed by Makarevich, Shevchuk and other prominent writers, musicians, academics.  They had also endorsed an appeal  signed by over 90 prominent Russian artists, musicians and academics, expressing grave concern over Russia’s rapid descent into a new cold war with the west and the “unrestrained torrents of lies and disinformation in all Russian state media”.  The authors spoke of “a deafening propaganda campaign against all who try to question the actions of the authorities and point out their disastrous consequences for the country and for the people”.