Another young Crimean Tatar has disappeared 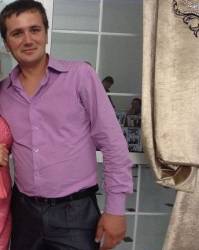 According to his brother, 29-year-old Usein Seitnabiyev from Feodosiya has been missing since Oct 21.  Ibraim Seitnabiyev told 15 Minutes that his brother was returning home from work when contact was lost with him.  At 19.30 that evening, Usein told his brother by phone that he was on his way.  Since then the phone has been turned off.  His wife reported him missing that same day.

With a number of Crimean Tatars having disappeared or been abducted, and at least one murdered, each such disappearance is immediately reported. Usein’s brother himself suggested that his brother could have come out with something verbally that got him into trouble, or it could be ‘because of debts’.  He points out, however, that even Usein’s wife has no idea what has happened.

The first disappearance was within weeks of Russia’s seizure of the Crimea.  39-year-old Reshat Ametov was abducted from outside parliament in Simferopol while holding a one-man picket against the invasion.  His badly mutilated body was found three days later, on March 16.  Although there is video footage clearly showing the abduction, nobody has been arrested, and the occupation regime is now seeking legislative amendments giving full immunity to the paramilitaries suspected of involvement in that and other crimes.

In early October 25-year-old Crimean Tatar,  Edem Asanov,  was found hanged in an abandoned sanatorium in Yevpatoria, a week after he disappeared on Sept 29.  The authorities have claimed that there was no foul play.

His disappearance was reported two days after the abduction on Sept 27 of two young Crimean Tatars from Sary-Su near Belogorsk in the Crimea.  19-year-old Islam Dzhepparov and his 23-year-old cousin Dzhevdet Islamov were forced into a dark blue Volkswagen Transporter and taken away in the direction of Feodosiya.

There has been no sighting since of the young men nor of the vehicle used in the abduction even though all details, including the vehicle’s registration number, were known.

This alone, given the presence everywhere of the Russian FSB [Security Service] arouses understandable scepticism as to how much the authorities know about the abduction.

23-year-old Crimean Tatar Apselymov Eskender has not been seen since Oct 3 when he left his flat in Simferopol and headed for work.  He did not arrive, and there is no answer from his telephone.

Three Crimean activists known for their opposition to Russia’s annexation of the Crimea - Timur Shaimardanov;  Seiran Zinedinov; and Leonid Korzh have not been seen since they disappeared back in May.