Russians against sending (more) troops into Ukraine but support ‘republics’More Russians aware that their sons are being sent to fight and die in UkrainePersecution of elderly activist exposing Russian soldiers’ deaths in Ukraine continuesRussian rights activist investigating soldiers’ deaths in Ukraine arrestedRussia continues lying about solders’ deaths in UkraineFirst reports on Pro-Kremlin TV of Russian soldiers killed in UkraineEntire Pskov paratrooper regiment killed in Ukraine?More Russian conscripts forced to fight in UkraineAttacked for asking why Russian paratroopers died fighting in UkraineThe Russian Invasion and Deaths Putin didn’t mentionRussian NGO has list of 400 killed or wounded Russian soldiersIf Russia is not at war, then who is in those freshly-dug graves?Macabre Convoy: Cargo 200 from Ukraine to RussiaInvasion by any other nameHalf-empty or half-emptied?Poland knows about Russian ‘humanitarian convoys’. It didn’t let one in.Stand up to Putin: buy Polish apples!No Sanctions Game Changer?Will the West sleep through this final wake-up call?Russian LifeNews inadvertently told the truth about downed Malaysian airline
• Topics / News from the CIS countries

47% of Russians see their country as internationally isolated 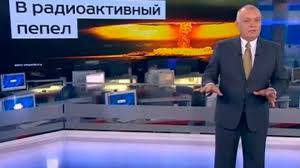 On March 17, Dmitry Kiselyov said on Russian national TV that Russia is the only country that can turn the USA into radioactive dust

The latest Levada Centre survey of Russian public opinion that Russians’ attitude to the USA, EU and to Ukraine has plummeted over the years that Vladimir Putin has openly, or indirectly, ruled the country.

If in Dec 1999, when the then President Boris Yeltsin resigned and Putin took over, 70% viewed the USA positively, in Nov 2014 74% viewed it in a negative light, and under 20% - in a positive.  There has been a particularly sharp fall this year: in early January 43% had a very good [2%] or basically good attitude [ 44%]; in Nov the figures were 1% and 17% respectively.  Those with a bad or very bad attitude have increased from 44% in January to 74% in November.

By contrast those with a positive attitude to Belarus have slightly increased, and the number now stands at 87%.

14% are sure that Russia is in international isolation, while 33% say that this is most likely the case.  33% believe this is probably not the case, and 13% are adamant that it is not.  Of those who think Russia is isolated, 63% are concerned, 35% are not (with 9% saying they are definitely not concerned).