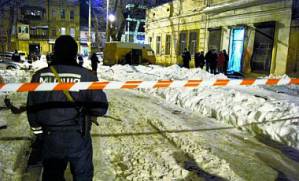 Concern is mounting after attacks in both Odessa and Kherson targeted pro-Ukraine volunteer organizations.  They follow other terrorist attacks, with the main targets in Odessa and Kharkiv.

In the latest of a spate of explosions and apparent acts of sabotage in Odessa, an explosive device was detonated in the offices of the  organizations on Sunday night.  The explosion which thankfully caused no injury is being treated as terrorism.  Representatives of the Maidan Coordination Council and the Coordination Centre for Help to the Military [officially the ATO or anti-terrorist operation] are also in no doubt as to why they were targeted, but are adamant that they will continue to help Ukrainian soldiers. Andrei Yusov, one of the founders of the Centre, said that they hope Kyiv will draw their conclusions and react to the situation in Odessa. “The government can’t or does not want to establish order in a pro-Ukrainian city whose population has repeatedly proved that it wants to live in a peaceful and united Ukraine”.

Sunday’s explosion came a day after a major fuel leak disrupted Odessa trains following what the police called a failed attempt to blow up a gasoline cargo train, another act classified as terrorist by the SBU [Security Service] and numerous other incidents over recent months.

Liga.net reports that an explosion near an apartment block which killed the person carrying the explosion prompted the announcement that the National Guard would be deployed in Odessa.  The first units appeared on Jan 3 and were thus already supposed to be patrolling the streets to prevent terrorist acts when yesterday’s explosion occurred.

Liga.net is clearly quoting the SBU in reporting that groups of saboteurs are at work in Odessa and the Odessa oblast. The SBU reported in October that they had eliminated such an ‘extremist group’ allegedly sent by the Russian security service to organize a number of terrorist acts and organize acts of protest.

Not all such acts have been averted, and Liga.net reports that in December there were three explosions – in a shop selling ‘patriotic items’, a volunteer centre helping ATO fighters and in the headquarters of the Public Safety Council, linked with EuroMaidan.

The mounting attacks in Odessa are of particular concern.  In April, when heavily armed men bearing a strong resemblance to the ‘green men’ in the Crimea appeared in Slovyansk and other Donbas cities, it was widely predicted that Odessa would also be seized by Kremlin-backed militants.

This did not happen despite the tragic events of May 2 – conflict between pro-Ukrainian and pro-Russian activists and a horrific fire in the Trade Union on Kulikovo Pole which the Russian propaganda machine has tried ever since to say was a deliberate massacre [see: Odessa ‘Massacre’: Propaganda vs. the Facts].

There have also been numerous explosions and other apparent terrorist acts in Kharkiv – another city which has thus far resisted all attempts to repeat the seizures of official buildings in the Donetsk and Luhansk oblasts. 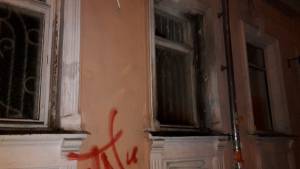 Kherson has always been much quieter, however its position as bordering on the Crimea has made it a fairly obvious target, and it is ominous that the NGO ‘Zakhyst’ has suffered too attacks in the past fortnight.  At around 4.00 on Monday morning a Molotov cocktail was poured through the gap for post in the door.  A fire broke out in the corridor and two windows were doused in the inflammatory liquid and set fire.  The organization says that their security firm got there in time and managed to localize the damage.  On Dec 26 the organization had windows broken. Then they decided not to report the incident, assuming it was just hooliganism.

Unfortunately it seems in all cities that much more is involved.