Outrage over homosexuality censorship; none over Peter Greenaway’s trip to the Crimea? 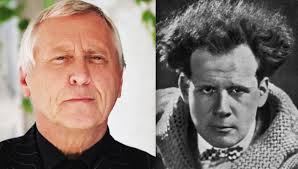 Reaction was immediate over Russian attempts to restrict a British film director’s mention of Sergei Eisenstein’s homosexuality. Western media, however, seem unaware, or disturbingly unperturbed, that the same Peter Greenaway has been trumpeted by the Russian media as planning to visit Russian-annexed Crimea, thus ignoring international sanctions and serious rights issues, including with respect to Ukrainian film director Oleg Sentsov.

The news that Peter Greenaway had been told to remove any reference to Sergei Eisenstein’s homosexuality in the new film he is producing came in a short article in Izvestia on Jan 4, 2015 entitled Gosfilmofond asks Greenaway to rework his film on Eisenstein.  The article cites Nikolai Borodachev, General Director of the Russian Gosfilmofund [State Film Fund] as saying that the film script has been returned to Greenaway because the latter “included details about the personal life of the great Russian director, in particular, mention of his non-traditional sexual orientation. Borodachev explained that if Peter Greenaway refuses to redo the script, the Russian party will not take part in the project”.

Public demands that a world-renowned film director  remove information about a person’s sexuality are most certainly not politically correct and on Jan 6 Borodachev told the BBC Russian Service that he had not even mentioned homosexuality in the interview with Izvestia.  This was promptly reported, among others, by Moscow Times, then the Guardian, with both noting the infamous legislation passed in Russia outlawing what is called ‘propaganda of homosexuality’.

There is much to be said – and condemned – about this obnoxious law and unacceptable attempts to curb artistic expression.   There is, however, at least as much to be said about artists and film directors prepared to flout international law and show total disregard for grave rights issues by visiting the Crimea under Russian occupation.

The reports in the Russian media began on Nov 24 last year and were reported in English as well as Russian, this making it even more unlikely that western media representatives did not see it.   It was the same Borodachev who was quoted by the TASS press agency saying that the visit had been agreed “with the Crimean leadership”

By “leadership”, of course, Borodachev meant Sergei Aksyonov and the other people installed by the armed Russian soldiers without insignia who seized control of official buildings in the Crimea on Feb 27, 2014, leading shortly afterwards to Russia’s annexation of this part of Ukraine.

There were no reports in the British media, and since Peter Greenaway had no particular reason to read a letter sent by the author of these lines, it is just conceivable that he knows nothing about such a planned visit, and that it has not been agreed with him.

Conceivable, but unlikely.  The pro-Kremlin media made a lot of this planned visit for fairly obvious reasons.  While the West may have done little more than express deep concern at the beginning, sanctions have now been imposed, and efforts made to isolate the Crimea while under Russian occupation.  There is also much greater awareness of the tragic consequences of the annexation for the Crimean Tatars and other Ukrainians who have no wish to live under Russian rule.

Greenaway may well argue, as on other occasions, that he has nothing to do with such political issues.  This in itself is a contentious issue, but there is another aspect to the situation which would make such a stance untenable.

Among opponents of Russian rule who have suffered most since annexation is one of Greenaway’s colleagues – Ukrainian film director Oleg Sentsov who is facing a likely 20-year prison sentence over absurd ‘terrorist’ charges and whom Russia is trying to claim has ‘automatically’ become a Russian national.

Given the number of well-known film directors and actors, including Andrzej Wajda, Ken Loach, Mike Leigh and Pedro Almodóvar who signed a letter initiated by the European Film Academy to the Russian authorities about Oleg Sentsov, it is most unlikely that he is unaware of this case.

He should, therefore, be aware that Sentsov and civic activist Oleksandr Kolchenko have been recognized as political prisoners by the Memorial Human Rights Centre and that there is no evidence against them aside from questionable ‘confessions’ from two other detainees held without access to lawyers or their families. As a film director, he will surely understand the degree to which both of these defendants are totally miscast for the role attributed them, and that the ‘terrorist plot’ itself lacks any credibility.

Despite all of the above, there is a very grave danger that Sentsov and Kolchenko will have been received 20-year sentences before Greenaway’s announced visit to the Crimea in the Spring (see Russian secret trial to convict opponents of Crimean annexation).

This is no time for his – or media – silence.