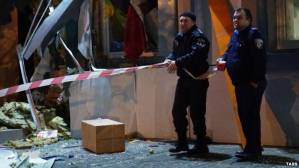 Police officers examine the site of an explosion at a building where an office collecting assistance for the Ukrainian military is based in Odesa last month. This incident was just one of many bombings across Ukraine in recent weeks.

Hardly a day goes by in Ukraine these days without headlines about some terrorist incident or about the country’s security forces breaking up a would-be plot or capturing a cache of weapons or explosives.

In recent weeks there have been dozens of small bombings across the country, with the epicenters being Kharkiv, Odesa, Mariupol, and Kyiv. There were at least six bombings in Odesa in December alone.

Most of the attacks have targeted the offices of pro-Kyiv organizations during nighttime hours, while a few have targeted infrastructure, the security forces, or Ukrainian politicians.

In the worst incident, 11 people were injured on November 9 when a bomb went off in a bar in downtown Kharkiv.

It seems to be a new phase of the conflict in Ukraine that is likely to last for some time.

Kharkiv, Odesa, and Mariupol seem to be in the crosshairs because they are geographically close to the pro-Russian separatist regions in eastern Ukraine and have significant ethnic-Russian populations.

Analysts and local officials are quick to say the attacks in those cities do not indicate broad support for joining the anti-Kyiv rebellion.

The relatively low level of damage and casualties caused by the attacks to date could indicate the goal is to sow anxiety and discontent, as well as to sap the government’s resources.

Authorities and most Ukrainians are convinced that the attacks are directly linked to Russia. They seem to fit into Moscow’s doctrine of hybrid warfare, which envisions waging a conflict throughout the depth of the enemy’s territory using a wide variety of tools and tactics.

The attacks have already forced the resource-strapped Ukrainian security forces to respond, stepping up measures throughout the country.

"We are implementing many preventive and prophylactic measures aimed at uncovering and averting violations of public order and provocative acts by radically oriented groups or movements or individuals, " says Ivan Katerynchuk, head of the local branch of the Interior Ministry in Odesa.

Security forces have stepped up patrols and have launched several public-awareness campaigns. Officials have also asked the public to avoid holding demonstrations or other public events that could be targeted.

Such measures, however, can be used by pro-separatist and pro-Russian organizations and media outlets to portray Kyiv as a failing or undemocratic government.

Authorities turned to the courts to try to prevent the Soviet-style, pro-Russian group Kharkiv Labor from holding a demonstration outside the office of the oblast administration.

"We wanted to register our strong protest under the norms of the constitution and relying on the fact that we have a democratic, law-based government, " Kharkiv Labor leader Pavel Tishenko told RFE/RL’s Ukraine Service.

According to Holmov, the campaign will test the "political will" of Kyiv and its Western partners and "the resilience of the Ukrainian public."

Ihor Rosoha is an activist and co-founder of the Coordinating Office of the Territorial Defense of Kharkiv. The goal of the office, he says, is to unite civic organizations and individuals to help the government counteract the campaigns being waged to undermine Ukraine.

He tells RFE/RL that his group will accompany security patrols in the city and help officials interact with locals and to try to counter what he calls "information aggression from Russia." They urge people not to believe "gossip" on social media, which they allege is placed by Russian agents.

"Our goal is not to replace the military or the state security organs, " he says. "Our goal is to mobilize society itself to repulse any aggression, to maintain the peace in our region."

Of particular concern in Kharkiv is an organization called the Kharkiv Partisans, which regional prosecutor Yuriy Danylchenko says is "constantly supported materially and tactically from the neighboring state, " meaning Russia.

Danylchenko says the organization’s only purpose is "committing terrorist attacks."

In mid-December, many locals in Kharkiv found disturbing season’s greetings in their mailboxes from the Kharkiv Partisans.

"In the envelope was a postcard with an emblem on which was written ’Kharkiv Partisans’ and the text: ’We will come for every Nazi scum, ’" said one woman, who asked to be identified only as a volunteer with Rosoha’s civic coordinating center.

"I know for certain I am not the only one who got such a card -- several people I know received the exact same message, " she added, saying that she had evacuated her family from the city.