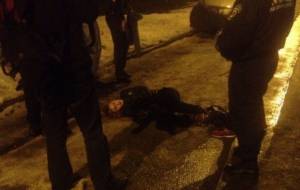 The explosion occurred outside the Moskovsky District Court in Kharkiv just before 19.00 on Monday, Jan 19.  12 people were injured, with 1 person in an extremely serious state and 6 others hospitalized, most with serious injuries.

Anton Herashchenko, MP and adviser to the Interior Minister, writes that the blast took place after the end of a hearing in the case of a member of the far-right VO Svoboda Party who is accused of having arrived at a polling station on Oct 26 last year (during the parliamentary elections) with a weapon. The suspect, named only as Mr Sokolov, was remanded in custody, despite calls for under restraint measure to be applied.  The explosion occurred immediately after people left the courtroom.

According to IT-Sector all 7 injured are members of Right Sector, though there is no indication of the source of their information.

Virtually all details are in fact provided by Herashchenko and the speed with which the conclusion is reached that Moscow was behind the explosion is somewhat disturbing.

In his first report within an hour of the blast, Herashchenko said that Sokolov’s party affiliation had no bearing on what happened, and mentions only that there was a support group at the hearing made up of “pro-Ukrainian activists”.

At this stage he wrote that “it’s still early to draw any conclusions – whether this is a terrorist act or whether one of the friends of the accused came to the court with a grenade.”

At some later point he added a note saying that “this explosion was a terrorist act planned in advance”, and that the version that this could have been a device brought by one of Sokolov’s friends had proven false.

Exactly one hour after the first message Herashchenko repeated that this was a previously planned terrorist act.  He gives reasons for the statement that it was planned in advance, however some of his assertions would surely be better expressed in more cautious terms a mere hour after the explosion.

“After investigators and experts examined the scene of the crime it transpired that along the path leading from the court, there was a concealed explosive device which was detonated when a large group of pro-Ukrainian patriots present at Sokolov’s court hearing on changing his restraint measure passed by.

The terrorists knew that like last time a large group of pro-Ukrainian and patriotic patriots would be present and planned their act in advance.

“I consider this terrorist act to be the answer from Putin and his terrorists to yesterday’s march attended by many thousands of Kharkiv residents against terror”.

He calls on all Ukrainians to rally together in the fight against terrorism and to help the Interior Ministry, SBU and other bodies in preventing terrorist acts.

It is not, however, clear in which capacity he is speaking when he addresses members of the “terrorist gang which organize today’s terrorist act in Kharkiv” and states – in fact, “guarantees”, that the first person to denounce the other members will have liability for the act waived if he shops his accomplices and those who helped in preparing and carrying out the terrorist act.

Soon after this message, Ukraine’s Security and Defence Council issued a statement in which they inform of the explosion in Kharkiv and say that the investigation has been placed under the Council’s control.

The title reads: “Russia is continuing its war against Ukraine, one of the components of which is the fostering of terrorist activity on our territory”.

There are very good grounds for believing that Russia is doing just that (examples here), but such titles so soon after an explosion, however many ‘patriotic Ukrainians’ may have been present, do not inspire confidence in an independent and comprehensive investigation.