Crimea: ‘Extremism’, ‘Separatism’ or ‘Terrorism’ as Weapons against Dissent 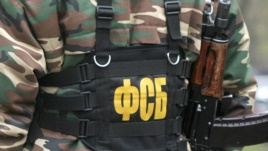 Another Crimean has been warned over alleged ‘extremism’ for holding a Ukrainian flag and the first criminal case is underway over supposed calls to ‘separatism’.  One year after Russia’s annexation, Soviet ways have returned to Crimea with new labels, but the same repression of dissidents.

Veldar Shukurdzhiyev, the third participant in a totally peaceful gathering to mark the 201st anniversary of Taras Shevchenko’s birth on March 9, has been issued with a warning against ‘extremist activities’.  The Crimean Human Rights Field Mission reports that Shukurdzhiyev was interrogated for over an hour on Tuesday in the Department on Countering Extremism before being issued with the warning which he refused to sign.

As reported here, on March 13 he and two other people – Leonid Kuzmin and Alexander Kravchenko -  were sentenced to 40 hours community work for what both the police and the court deemed use of ‘prohibited symbols’ – namely the Ukrainian flag and ribbons in the colours of the flag.  The following day, Kuzmin and Kravchenko were detained in Shevchenko Park and also issued with the same ‘extremism’ warning (see: ‘Prohibited’ and ‘extremist’? New detentions over Ukrainian Ribbons)

This was the first case where a court imposed a sentence for a Ukrainian flag.  Abuse of Russia’s overly broad anti-extremism legislation began shortly after annexation, with repressive measures against Crimean Tatars very often linked with supposed ‘extremism’.

The Crimean authorities under occupation have launched the first criminal case under Article 280.1 of the Russian Criminal Code (public calls to acts aimed at infringing the Russian Federation’s territorial integrity).

The Crimean Field Mission is blunt in calling such accusations a new form of repression against the media in Crimea.  Mission spokesperson Dmitry Makarov points out that this legislation is dangerously vague enough to include any discussion of Russia’s borders or future of its territory.  Since the potential sentence if convicted of such discussion (not action, just talk) is 5 years imprisonment, this is clearly highly disturbing.

Application of the article to Crimea whose annexation is disputed far beyond Ukraine is of an overtly selective nature confirms the repressive purpose of the article itself, and the practice of its application, the Mission stresses.

As reported, the criminal proceedings initiated led to Natalya Kokorina, journalist from the Centre for Investigative Journalist being detained on Friday for over 6 hours and her parents’ home searched.  The home of the parents of Anna Andrievska, the journalist whose article has been deemed just a ‘public call’ was also searched.

Andrievska herself has been living in Kyiv since annexation, and the Centre is registered with the Ukrainian Justice Ministry, making it a Ukrainian publication.  Indeed Olha Skrypnyk, Deputy Head of the Crimean Field Mission is convinced that the application of the so-called ‘separatism’ norm over an article published in the Ukrainian media indicates an effort to stifle freedom of speech and persecution of Ukrainian journalists.

Details and some translation from “Volunteers of the Crimea [Krym] Battalion”  - seemingly the publication in question – can be found here:  Wave of Repression against Crimean Journalists

Four peaceful opponents of Russia’s occupation of Crimea were arrested in May 2014 and accused of a Right Sector ‘terrorist plot’.  Renowned film director Oleg Sentsov; civic activist Oleksandr Kolchenko and Oleksy Chirny face up to 20 years in prison over clearly fabricated charges with the only ‘evidence’ in this case likely to be the testimony of the fourth defendant, Gennady Afanasyev, who was almost certainly tortured into initially ‘confessing’, and whose testimony changed numerous times.

On Tuesday a Crimean court extended for another two months the detention of three Muslims who were first arrested in January this year and charged with organizing and taking part in the activities of Hizb ut-Takhrir.  According to lawyer Emil Kurbedinov, one of the men could have life imprisonment or 15-20 years and the other two from 5 to 10 years.  The charges are under Article 205.5 of Russia’s Criminal Code – organizing or taking part in the activities of a terrorist organization banned in the Russian Federation.

Hizb ut-Takhrir  is an international organization and, according to the Crimean Field Mission, Russia is the only country in the world where the organization is considered terrorist.  It is legal in Ukraine.

As well as the above, Russia and its occupation government in Crimea have also resorted to overt contempt for the law, by holding people in detention for alleged actions before Russia’s annexation of Crimea.  More details of those and other forms of repression here: Bitter Crimean Anniversary – Victims of Russian Annexation