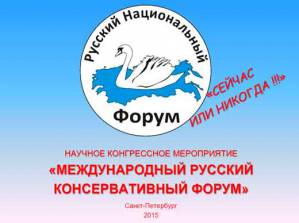 Europe’s far-right parties are due to take part in an ‘International Russian Conservative Forum’ whose organizers hope to find ‘allies in Europe’ among far-right and neo-Nazi politicians who will support Russia’s ‘conflict with Ukraine’ and seek to get sanctions removed.

Leading members of many of Europe’s far-right parties are about to descend on a Russian conference aimed at creating a pan-European movement “that will uphold traditional values” and “lobby Russia’s interests”.  According to Kommersant, its organizers hope to find ‘allies in Europe’ among far-right and neo-Nazi politicians who will support Russia’s ‘conflict with Ukraine’ and seek to get sanctions removed.

St. Petersburg opposition politician Boris Vishnevsky notes that this gathering of nationalists and neo-Nazis from all over Europe is taking place in the run-up to the seventieth anniversary of victory over Nazi Germany.  This is not the only irony, of course.  Over the last year and more Russia has persistently enlisted the aid of fascist and neo-Nazi groups and parties to support its aggression against Ukraine while claiming that it is fighting a ‘fascist regime’ in Ukraine.  A considerable number of the former and current leaders or prominent figures in the so-called Donetsk and Luhansk ‘people’s republics’, like Ukrainian Pavel Gubarev, Russian Alexei Milchakov; Alexander Borodai and Alexander Proselkov, and very many others have or had strong ties to far-right or neo-Nazi Russian organizations.

The ‘International Russian Conservative Forum’ in St. Petersburg on March 22 has been organized by the Rodina Party, described by far-right researcher Anton Shekhovtsov as fascist and headed by Russia’s Deputy Prime Minister, Dmitry Rogozin.   The Forum’s website begins with a long quote from Russian President Vladimir Putin’s address at the Valdai Club in which the former KGB officer says that “many Euro-Atlantic countries have effectively rejected their roots, including the Christian values forming the basis of western civilization”.

The Forum’s ‘mission’ includes developing “a new concept for humanity’s development as a response to the liberal-trans-national ideology destroying it” and “integrating the possibilities of political and civic conservative organizations of Europe and Russia in conditions of destructive instability and economic sanctions”.

11 parties, some with deputies in the European Parliament, will be represented, many by their leaders.  The parties are all far-right, some with neo-Nazi leanings and, as Vishnevsky points out, can all be relied on to support Putin on the international stage. They include Greece’s Golden Dawn party; the National-Democratic Party of Germany [NPD]; Austria’s Freedom Party; the British National Party* ; Italy’s New Force [Forza Nuova) with its leader Roberto Fiore expected; the Party of the Swedes; and others.  Kommersant notes that Marine Le Pen from France’s National Front has decided not to go, and believes this is out of fear of damaging her reputation before regional elections taking place at the weekend.  Certainly a change of heart need not be suspected with Le Pen having come out strongly in support of Russia’s annexation of Crimea and Putin generally, and her party having received a hefty loan from a Russian bank in 2014.

Fiore is described by Vishnevsky as a far-right politician, a nationalist and Catholic traditionalist who represents the conservative direction in neo-fascism, though calls himself a fascist.  His party has been strongly behind Russia’s annexation of Crimea and position, as Vishnevsky puts it, on the “Ukrainian question”.

His was one of the far-right and neo-Nazi parties that descended on Yalta in August last year to discuss “the fight against the fascist junta in Kyiv”.

Udo Voigt from NPD is a far-right politician and currently a deputy at the European Parliament.  “He doesn’t conceal his anti-Semitic and xenophobic views and has frequently faced administrative and criminal liability for inciting rebellion and other offences”.   He gained notoriety, for example, by claiming that the figure of 6 million killed in the Holocaust is exaggerated, and that the real figures was 340 thousand.  His stated profound respect for the soldiers of the Wehrmacht, Luftwaffe, etc. and for the SS “who to the last day fulfilled their duty” earned him a 10 month suspended sentence in Germany and makes his presence in St. Petersburg as Victory Day approaches especially inappropriate.

Vishnevsky points out that the description of Golden Dawn as neo-Nazi and neo-fascist is also no exaggeration.  Their statute allows only “Arians by blood and Greeks by origin” to be members of their party. Their emblem is a stylized swastika and their members openly admire Adolf Hitler.  Both the Swedish and Danish parties are neo-Nazi and national-socialist.

Siniore Gierre from Italy is described as a member of the ‘Movement for Donbas’ who strongly supports the ‘fighters of Novorossiya’ and is trying to “get their voice heard by people in Europe”.  He is convinced that “NATO is threatening Russia and has already invaded Europe”.

Alexander Kofman, so-called foreign minister of the self-proclaimed and Kremlin-backed and armed ‘Donetsk people’s republics’ will also be present.

Kofman and this “mixture of neo-Nazis, nationalists and anti-Semites” will be meeting on Sunday with Russian defenders of “traditional values” a la Putin and demonstrating just how Russia is lobbying its interests in Europe.

*  Nick Griffin is mentioned as leader of the BNP, although he was removed as leader in 2014)