Remember Ilovaisk and don’t trust Putin’s call for safe passage!Russia’s Ilovaisk TreacheryThe Russian Invasion and Deaths Putin didn’t mentionRussian NGO has list of 400 killed or wounded Russian soldiersIf Russia is not at war, then who is in those freshly-dug graves?Macabre Convoy: Cargo 200 from Ukraine to RussiaInvasion by any other nameHalf-empty or half-emptied?Poland knows about Russian ‘humanitarian convoys’. It didn’t let one in.Stand up to Putin: buy Polish apples!No Sanctions Game Changer?Will the West sleep through this final wake-up call?Russian LifeNews inadvertently told the truth about downed Malaysian airlineMilitants accused of deliberately shooting at Severodonetsk residential areaSent to be shotThe EU’s Opaque Dealings with UkraineWhose anti-Semitic and Homophobic Choice?What should they talk about, Mr Putin?The Peace that chokes RussiaEU’s Clear and Consistent Capitulation?
• Topics / Freedom of expression 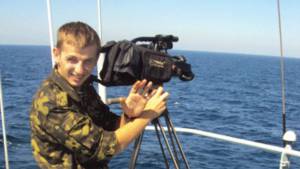 Dmytro Labutkin, military journalist for the Sevastopol TV channel ‘Breeze’ who moved with his family to Odessa after Russia’s invasion of Crimea, was killed in Debaltseve last month.  Kremlin-backed militants had earlier waved his journalist pass and documents around, but his family and friends were still hoping he might have been captured.  His friend and former colleague, Vitaly Panchishin reports in Fleet of Ukraine that the hope has faded: Dmytro Labutkin’s body was found in a Dnipropetrovsk morgue.

“Officer, patriot, true citizen of his country, he died during the fighting in Debaltseve.”

“To the last I had hoped that Dmytro was alive, despite the video clips of the separatists who, with cynical arrogance and contempt a month ago showed Dmytro’s documents and waved them around in front of the camera”

Dmytro Labudkin was married, with a daughter.

Vladislav Seleznev from the Ukrainian Army Headquarters reports that 19 military people died as solders were withdrawn from Debaltseve, and that 195 Ukrainian soldiers were taken prisoner.

Less than a week after the supposed ceasefire agreed at talks in Minsk in February by Russia’s President Vladimir Putin, Russian and Russian-armed troops ceased control of a major part of Debaltseve.  The head of the so-called ‘Donetsk people’s republic’ Alexander Zakharchenko and one of the chief commanders stated shortly after the officially agreed start of the ceasefire that the militants would not be observing it in Debaltseve.   "Of course we can open fire, " Eduardo Basurin, a senior rebel commander of forces near Debaltseve, told Reuters. "It’s our territory. The territory is internal: ours. And internal is internal."