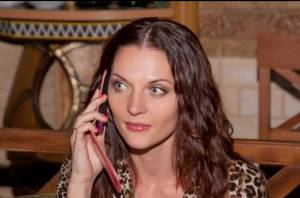 Fears that a new law brought in shortly after Russia’s annexation of Crimea would be used against journalists and independent media are proving well-founded.  Another journalist has been interrogated over a criminal case brought against journalist Anna Andriyevska over an article published by the Centre for Investigative Journalism.

Anna Shaidurova, former Centre for Investigative Journalism editor and journalist, was interrogated for around 3 hours on Wednesday by the FSB [Russian Security Service].  She was questioned, in the presence of her lawyer, but was made to sign an agreement to not reveal any details and was able to say only that “we talked about editorial work and the duties of the Centre’s staff.”

This is the latest worrying development, suggesting that the FSB may try to target both the author of the article in question, and the Centre for Investigative Journalism [CIJ], one of the few independent sources of information about ever-increasing infringements of rights in Crimea.

This new interrogation comes less than a month after CIJ journalist Natalya Kokorina was detained and questioned for around 6 hours.   On March 13, she was taken to the FSB office after a 4-hour search was carried out of her parents’ home, and her laptop taken away. Her lawyer then said that other journalists were likely to also face questions.

On that same day a search was carried out of the home of the parents of Anna Andrievska, the author of the article which attracted the attention of Russia’s security service.   The search was nonsensical since Andrievska has not lived with her parents for over 10 years.  The officers tried to take photos with Andrievska in them.  Her parents refused to hand them over, so as well as old notes made by the journalist herself, they took her father’s computer away.

Concern had long been expressed that a new law from May 2014 criminalizing ‘public calls to separatism’ could be interpreted very loosely and used against Crimeans expressing their position that Crimea remains part of Ukraine, and should be under Ukrainian governance.  The new law came into force at a time when Moscow was very clearly funding and manning the so-called ‘separatists’ in Donbas.

The author of the article which the FSB has decided encroaches on Russia’s ‘territorial integrity’ is in Kyiv and it can be safely assumed that even if Russia were so brazen as to ask for her extradition, the request would be rejected.  Were she to be tried and convicted, she could face a 5 year sentence.

Andrievska told Hromadske Radio’s Voices of Crimea programme about how she came to be living in Kyiv.  Like other Crimeans, she explains, she woke on Feb 27, 2014, to find Simferopol full of armed men – the so-called ‘little green men’ who were, of course, Russian soldiers.  She had been working for Argumenty Nedeli, a Russian-owned publication which up till Russia’s invasion did not interfere with journalists’ freedom.   After it, she says the management made it quite clear that journalists should not connect the events with Russia, etc., and Andrievska had no choice but to resign.

She explains that she was born and lived all her life in Crimea, and it was a hard decision to leave for good, or for a long time, and she first spent 3 months trying to understand whether she could work as a journalist in Crimea.  As well as one bad run-in with the so-called ‘self-defence’ paramilitary vigilantes, she also mentions the strain of understanding that your phone is being tapped around the clock   Before she was free, now she was unable to express her views and doing so could put her physically in danger.

She has not seen any of the FSB documents regarding their criminal case, but believes it to be linked with an article published by the Centre for Investigative Journalism when she was already living in Kyiv.  The article “Volunteers of the Crimea [Krym] Battalion”  is about people providing support for the Krym [Crimea] volunteer battalion fighting in Donbas, and for other Crimean units fighting within other battalions.

The reader can decide whether this is a criminal offence deserving a five-year prison sentence.