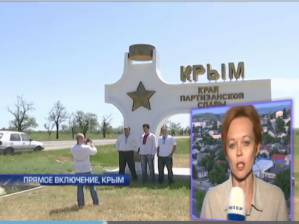 A flash mob to mark Ukrainian Embroidery Day in Russian-occupied Crimea on Thursday resulted in four Ukrainian activists and three TV Inter journalists being detained, interrogated for five hours and having their fingerprints taken.  When asked why the fingerprints were needed, the officers replied that this is in case “something happens to you tomorrow.  Headless bodies get found here”.

With three Ukrainian activists and a number of young Crimean men still missing after being abducted and / or disappearing without trace since Russia annexed Crimea, the threat contained in the words was clear.  Leonid Kuzmin and other activists from the newly created Ukrainian Cultural Centre in Crimea have heard similarly menacing remarks before.  They have also experienced similar forms of harassment, with each heavy-handed measure by the police more absurd than the last. 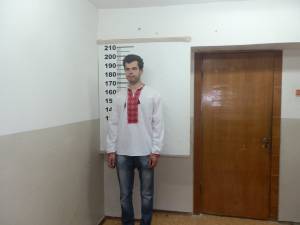 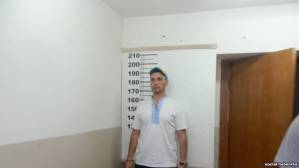 The activists decided to create their 'flashmob' in the police station (above are Leonid Kuzmin on the left, and Veldar Shukurdzhuyev on the right)

The flash mob was totally innocuous.  Four activists planned to take photos of themselves near the above structure on the road leading to Crimea from the Armyansk border crossing with mainland Ukraine, and then post the photos on social networks   A TV Inter film crew arrived to film them in a separate car.

The police turned up in large numbers and first searched the cars, claiming that they had received information that “prohibited items” were being transported.

They found nothing yet took all journalists and Ukrainian activists to the police station where they were held for almost 5 hours, as well as being photographed and, as mentioned, having their fingerprints taken.

They were finally released with the protocol drawn up claiming that they had been detained “to establish their identity”.  Inter journalist Yulya Kryuchkova points out that the police were immediately shown their journalist ID and documents from Ukraine’s Foreign Ministry.  She adds that the activists also had their documents on them.

Four Crimeans, including at least two of the activists detained on Thursday - Leonid Kuzmin and Veldar Shukurdzhiyev - were sentenced by a Simferopol court in March for holding a Ukrainian flag and ribbons in the colour of the flag during a totally peaceful gathering marking the 201st anniversary of the birth of Taras Shevchenko.  The court agreed with the police officers that a Ukrainian flag and ribbons are ‘prohibited symbols’ in Russian-occupied Crimea and sentenced Kuzmin, Shukurdzhiyev and Oleksandr Kravchenko to 40 hours community work  (see: Crimean Court Finds Ukrainian Flag a “Prohibited Symbol”)

All three men were later taken to the Centre for Countering Extremism and issued warnings.  Kuzmin who lost his job as a teacher over the Shevchenko gathering was also viciously attacked soon afterwards.

This latest heavy-handed behaviour in occupied Crimea comes just three days after numerous detentions of Crimean Tatars trying only to gather in memory of the victims of the Deportation.  One man – Nariman Dzhemiliev and his children – were taken to the police station over a Crimean Tatar flag, while 60 people in Simferopol and a further 20 in Bachchysarai were detained and interrogated for many hours. Some are facing administrative penalties for remembrance.

As reported, Leonid Kuzmin and probably the other activists detained on Thursday, joined Crimean Tatars in remembering the victims of the Deportation on May 18.  One of the ways in which they demonstrated their solidarity was by placing a bouquet of flowers entwined in barbed wire under one of the two monuments or plaques to mass murderer Joseph Stalin which have appeared in Crimea since annexation.